I am taking a break from the DC heat by looking page by page through the Sonora, Mexico Catholic Church records on FamilySearch. I am hoping to find more information on the family of my 2nd-great-grandmother, Maria Jesus Vasquez, and her parents Gabriel Vasquez and Maria Jesus Suastegui. By going through the Informacion Matrimonial records for the district of Altar, I might find siblings of Gabriel. In these records I have already run across others in the Suastegui family, who were well settled in Altar when Gabriel arrived by 1858. This is a slow process.

My 3rd-great-grandfather Vicente Campuzano appears on 15 April 1860 as a witness for Vicente Grijalva in his intended marriage. The testimony shows he was a zapatero (shoemaker) originally from Arizpe, and includes his signature. This is the type of find that makes slogging through the unindexed pages worthwhile.

Posted by Patrick Jones at 2:30 PM No comments:

Revisiting the Mexican Side of the Tree

The approach of June has me rexamining my Mexican ancestors. The organization Welcome.us is using June to celebrate Immigrant Heritage Month, something I wrote about last year. In this blog I have explored this side of my heritage on a regular basis. For example, last November I wrote about the family of my 2nd-great-grandmother Teresa Diaz, whose parents trace back to 1840s Sonora, Mexico. These roots are deep, but are also interwoven with stories of the family's migration to the US (see here and here).
While I was traveling this month, and since returning, I have been exchanging messages with distant cousin and fellow researcher Reclare. We are comparing DNA results and historical records to better understand our connections with other potential cousins related to the Vasquez-Suastegui line of my 2nd-great-grandmother Maria Jesus Vasquez.

I previously had the intent to marry documents for Gabriel Vasquez and Maria Jesus Suastegui from December 1863. Those papers identified Maria Jesus' parents - Pedro Suastegui and Ana Maria Orosco (my 4th-great-grandparents). Raclare found a copy of Pedro and Ana Maria's marriage record in the loose leaf pages for Altar. She estimates this is from 1846. The page shows Pedro Suastegui, legitimate son of Francisco Suastegui and Dolores Josefa de la Pena, joining in marriage with Ana Maria Orosco, daughter of Ramon Orosco and Reyes Baldes. This document identifies both sets of my 5th-great-grandparents.
I will have more documents in June on these connections and their place in a larger narrative about Mexican roots and the US.
Posted by Patrick Jones at 12:05 PM No comments:

Another Look at the Thornhill and Gass family

Back in March 2012, during a review of records involving my 5th-great-grandfather Thomas Jones, I wrote about a bond where Thomas was a surety for Joseph Thornhill, the brother of Elizabeth Thornhill Jones (my 4th-great-grandmother). Several weeks ago, I made a lunch time visit to the Daughters of the American Revolution Library in Washington DC. In the books for Jefferson County, Tennessee, I found reference to an 1845 county court case involving the estate of Joseph Thornhill and an unpaid debt to the estate of Samuel Gass. In order to understand the case, I need to write about the connection between these two families.

Samuel Gass died on 5 June 1839, followed by his wife Rebecca in 1840. Their sons John and Andrew Gass were named executors of the estate. Joseph Thornhill died about 1842, apparently still owing the $1000 debt to Samuel's estate. Below is a description of the court case from the Jefferson County record (note, I have corrected misspellings involving the names of the Gass family):

On 28 March 1836, Samuel Gass sold land. Samuel Gass departed this life and orators were appointed executors. Thornhill's notes are unpaid. On 2 June 1842 is a bill of reviver stating Joseph Thornhill departed this life intestate leaving a widow, Polly Thornhill, and the following children: Marion, Thomas, Samuel, Jane, John and Margaret, all infants." [* they were all minors]

I do not know how the case was resolved.

Here is a list of the children of Joseph Thornhill and Mary Polly Gass:

Detail on Samuel and Rebecca Gass can be found in a publication from 1992 titled "Samuel Gass and His Descendants: A Family in East Tennessee" by Gary C. Jenkins (pdf available on Ancestry). According to this document, Samuel's oldest son John Gass served in Captain George Gregory's Company, East Tennessee Militia during the War of 1812. This is the same company as my 5th-great-grandfather Thomas Jones.
Posted by Patrick Jones at 9:08 PM No comments:

It is hard to believe how much has changed in a year. Happy Birthday!

Posted by Patrick Jones at 5:37 AM No comments:

Last Sunday I had a free day to wander around Istanbul. I started in the Ortaköy neighborhood, along the Bosphorus. Ortaköy is full of brunch places facing the water, and has a well-known Sunday market which draws many visitors. Early in the morning it wasn't busy. But by the time I came back in the early evening from a day of walking, the waterfront walk was packed.
I was able to grab a great spot at the bar of Brasserie Bomonti and watch the sunset. Good pizza, and friendly staff. This was a nice way to cap off a long weekend of exploring Istanbul. I covered 40 miles running and walking from Saturday to Sunday.

Posted by Patrick Jones at 7:15 PM No comments:

While I was traveling, helpful Kentucky researcher Linda sent me a news clipping from the 23 July 1914 edition of the Glasgow Republican newspaper. The clipping describes Carl Read, the last child of my 2nd-great-grandparents Charles Read and Mary Alice Cain. 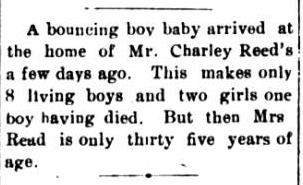 By my count, Charles and Mary Alice had six boys and four girls. I also do not have a record of a son who died before 1914. This does not mean the fact is wrong, but I do not have the information. I have intended to reach out to the Glasgow Presbyterian Church to see if they have anything in their church records on the Reads (or even better, the Cain family).
Posted by Patrick Jones at 6:01 AM No comments:

I was surprised by Uzbekistan. Unfortunately I only had two days for the workshop, but if I had more time, I would have explored the historic Silk Road city Samarkand and ventured further around Tashkent, the largest city in Central Asia.
There was even a bit of street art in Tashkent - see the stencil below taken in front of our hotel. Either an unknown Uzbek woman, or perhaps a stencil of Roxana, the wife of Alexander the Great.

After the workshop, on Thursday afternoon our group had time to take the Metro to Chorsu Bazaar and the Khast Imam Mosque. I will have more photos of the Mosque in a following post. The Bazaar was less hectic in comparison to the Grand Bazaar of Istanbul, but great for people watching.

Memorial of the Grieving Mother

Over the past few days I have been at a workshop in Tashkent, Uzbekistan. This was my first time in this country. At the end of our workshop, some of our group had the chance to explore the old city. I will have some photos of that trip to post. But before I show those, I have two from the Grieving Mother memorial in central Tashkent's Independence Square.
The memorial honors 400,000 Uzbeks who died in World War II. The niche in the second photo contains the names of those who died. The man above was in quite reflection in front of the names.
Posted by Patrick Jones at 5:57 AM No comments:

In honor of International Museum Day, I have a collection of photos from my wanderings around Istanbul over the weekend. On Saturday, the Pera Museum was open until Midnight. The first set of pictures are of street art from last year's Pera Museum exhibition, art work which can still be found in Abbasaga Park in Besiktas. The next set shows art from the Istanbul Museum of Painting and Sculpture, followed by some shots from the Istanbul Modern Museum.

The shot above is by German duo Herakut, from last fall's Language of the Wall exhibition. The translation from Turkish is "Imagine you had to teach your kids never to laugh."

The painting above is from the Istanbul Painting and Sculpture Museum. At 10 TL (about $3.80), it is a bargain. While the lines were packed at neighboring Dolmabahce Palace, the Painting and Sculpture Museum was empty.
Down the street from Dolmabahce Palace is the wonderful Istanbul Modern museum. They also have a nice restaurant with great views of the Bosporus.
The first two photos are from the 'Past and Future' exhibition of modern and contemporary art from Turkey. The museum also has a very interesting photography exhibition titled 'Magnum - Contact Sheets' on display through 2 August.


Posted by Patrick Jones at 5:02 PM No comments:

I made a return visit to Istanbul in order to speak at conference last Friday and transit to meetings later in the week in Central Asia. Over the weekend I had some free time to explore Topkapi Palace and a few of the other museums that I missed last month. Topkapi Palace is amazing and I highly recommend it if visiting Istanbul.
The calligraphy in the image above is called a tughra, and it represents the signature of the Ottoman sultans. The tughra appears above the entrances of palaces in Istanbul.

There is a separate fee to visit the Harem (15 TL), this is the private quarters of the Sultans and family. The tile work throughout this section is stunning. I recommend arriving early to avoid the lines.

Here is a another set of street art photos from our visit to Seattle last month. This is a mix of styles, from inside a glass blowing studio, to jazz-themed murals, and a market scene inside the Assembly Hall/TanakaSan/Home Remedy trio of restaurants.

Posted by Patrick Jones at 6:12 AM No comments:

Back in February 2012, I wrote about a 1797 court case involving my 5th great-grandfather Thomas Jones, where a jury found Thomas guilty of battery on John Willson. At the time I did not realize there was a companion case, where the same jury found John Willson guilty of committing battery on Thomas.


Below is a transcription:

The State vs John Willson}

The grand jury for the State by Samuel Lyle foreman brought here into Court their bill in the following words to wit. The grand jurors for the State and County of their oaths present and say that John Willson, labourer late of said County to wit at Jefferson in the County of Jefferson on the Seventh day of November 1797 with force and arms an assault did make in and upon the body of said Thomas Jones did and there beat and wound and evilly treat and other wrongs then and there did to the great of the said Thomas Jones and against the peace and dignity of the State of Tennessee.

To which charge the said John Willson pleaded not guilty. Whereupon came a jury to wit, Arthur Williams, William Brittain, William Elliott, Jessee Riggs, John Hooser, John Morris, Moses Yell, George Brindle, John Corbit, Samuel Hunter, John Greene, and William Inman who being elected tried & sworn do say the Defendantis guilty in manner and form as charged in the Bill of Indictment. It was therefore considered by the Court that the Defendant pay a fine of Two Dollars and the costs.
Posted by Patrick Jones at 9:49 AM No comments: