Posted by Patrick Jones at 1:17 AM No comments:

On Sunday I ran to down to the Helsinki harbor. The photo above is from 1909. I captured several photos of the same area, and many of the ships look much the same as the older photo.

Posted by Patrick Jones at 8:03 AM No comments:

Yesterday afternoon I had the chance to visit the Temppeliaukion Church, or Rock Church, in Helsinki. This landmark Lutheran Church was designed by architect brothers Timo and Tuomo Suomalainen and built directly into rock in the late 1960s. The church has a unique design, with lots of light around the top and a copper circular ceiling.
When I went an organist was playing music on the large organ seen in my top photo. The space is really interesting, and fits naturally with the rock and circular ceiling. What I liked about it is that it did not feel like a traditional cathedral, the church really blended in well with the rocks and windows bringing in natural light. It was a neat place to see, and is one of the most visited sites in Helsinki.

Posted by Patrick Jones at 4:31 PM No comments:

I am in Helsinki, Finland for a week of meetings. Today is Midsummer, also called Juhannus, a national holiday in Finland. Yesterday's grey skies have been replaced with bright blue and lots of sun. I am enjoying a bit of sun and walking around the city today before diving into meetings and conference rooms for the week.

Last night I completed my longest distance run to date, doing 17 miles through Helsinki. Next Friday or Saturday I'll step up to 18 miles when I run part of the marathon course in Reykjavik, Iceland. This will be good preparation for the marathon in August.

Earlier today I took a walk to the Suvilahti Graffiti Wall in the Kalasatama area of Helsinki. The photo above and several photos below are from this area. The former industrial area is becoming a creative space, used by artists, media companies, studios and a brewery. The area hosts rock concerts and other activities.

Posted by Patrick Jones at 7:00 AM No comments:

With the anticipation of the US Supreme Court's expected ruling in US v Texas, I thought it was fitting to post this photo from the collection of Irene Wagers. The young boy in the center, 4th row, with an X above his head was her father, Ataulfo Campuzano. This picture is from the Red Rock school in Red Rock, Pinal County, Arizona, and was likely taken between 1901-1903. The students in this photo were probably children of immigrants, or immigrants themselves.

These children may have gone on from school to do things like Ataulfo, who became a US citizen, worked as a printing press operator in Arizona newspapers, witnessed a fire and sounded an alarm, potentially saving lives and buildings in the process. While times may have been different around 115 years ago, these kids were looking for the same opportunities that children of immigrants seek today. A fitting post to close out Immigrant Heritage Month.
Posted by Patrick Jones at 9:54 PM No comments:

South of the Border

After the prison break in June 1916, it was unclear whether Louis Basso had made it to Mexico or was hiding in Arizona. An article from 1 February 1917 (see the end of my previous post) indicated that Basso might have been working as a waiter at a restaurant in Nogales, Sonora. An article published on 2 February 1917 provided another possible direction for Basso.
It is ironic that a man who had been in jail in the US would later be working as a policeman in Hermosillo.

In order to understand what happened next for Louis Basso, we have turn our attention back to Jesus Anaya. I have sent a request to the Colorado Archives for a copy of her file in the Department of Corrections. In the meantime it looks like she was released from prison sometime in early 1917, as she appears in the Sonora Civil Registration database in December 1918 for the birth of her daughter, Loreto, in Hermosillo. The father was listed as Luis Basso.
The document above indicates Loreto Basso was born on 27 October. It also shows Louis had become a Mexican citizen, and it lists his parents as Jose Basso and Josefina Rose from Italy. The document also lists Jesus Anaya's parents as Jesus Anaya and Loreto Moreno of Hermosillo. There is potential for another family connection with the Moreno family of Hermosillo in my tree.

Finding the birth record for Loreto Basso led me to another series of records, this time involving border crossings for Jesus Anaya and her children, including photos. The record below shows Jesus was deported to Mexico after her release from prison in 1917. 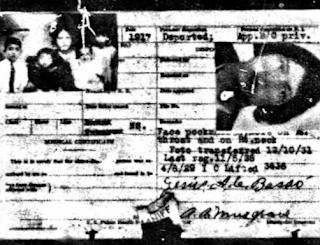 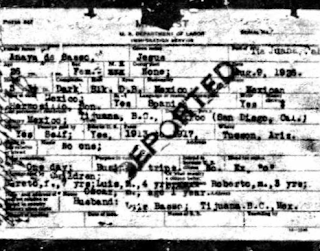 So after everything, the jail house wedding, Louis Basso's prison break and escape to Mexico, Jesus' incarceration in Colorado, they were able to reunite in Hermosillo and settle into a life in Baja California. Jesus and her children were even able to regularly cross the border into San Diego, California. The kids may have attended school in San Diego. 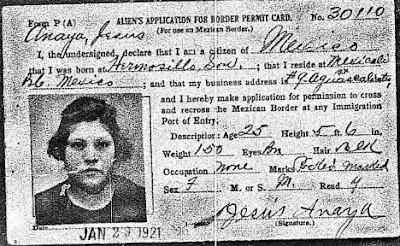 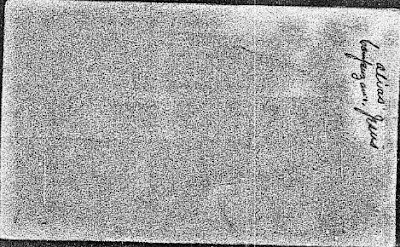 It looks like Basso may have died around 1927, as Jesus Anaya appears in additional border crossing records as Jesus Anaya de Cano. These records also show that Immigration was always aware she had been deported in 1917, but admitted her entry to the US. First on one day visits, and later she was able to take the train from San Diego to Tucson to visit family. Jesus had at least four children by this marriage: Ernestina, Antonio, Sylvia and Martha Magdalena Cano.

Jesus Anaya de Cano died in Hermosillo, Sonora, Mexico on 21 November 1953.
Posted by Patrick Jones at 9:19 AM No comments:

The story involving Jesus Anaya and Louis Basso took a sensational turn when Louis escaped Maricopa County Jail along with seven other federal prisoners on 8 June 1916. The wife of one of the prisoners helped the men escape by smuggling a hacksaw into the prison when she was visiting her husband. 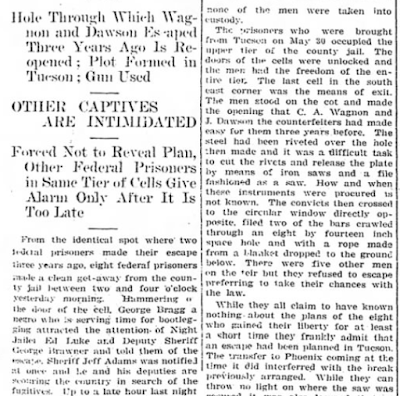 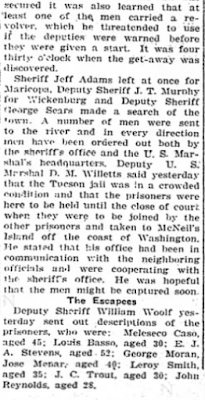 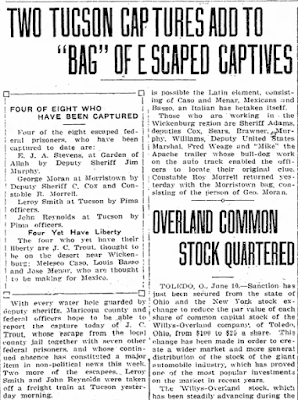 After making their escape from Phoenix, several of the men held up a freight train, pretending to be stranded miners dying of thirst. This was the English speaking contingent of the escapees. Basso was part of the Spanish speaking group who made a straight run for the border. The English speaking inmates, led by J. C. Trout, were all captured by 13 June 1916. The story of Trout and the others is pretty crazy, but my focus is on Basso. 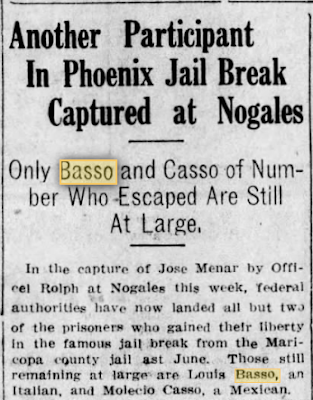 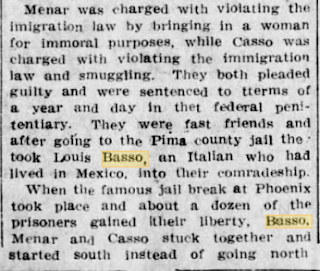 As of 1 February 1917, Basso and Molecio Casso had not been captured.

A bit of background. Louis Basso was born in Naples, Italy about 1889. In the 1910 US Census, Basso was working as a dishwasher in a restaurant in Riverside, California. The census record indicates he arrived in the US about 1906. It is unclear when he may have gone to Mexico, but he appeared in the US border crossing records at Naco, Arizona on 30 March 1915, as a cook going to Bisbee, Arizona. 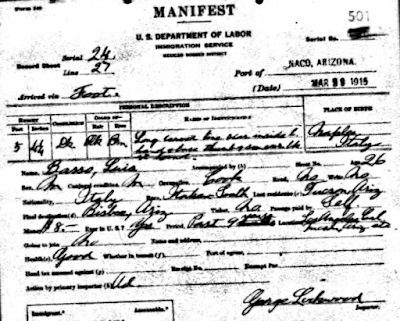 Basso met Jesus Anaya, probably in 1914 or early 1915, perhaps in a restaurant in Tucson. They certainly struck up a connection. Unfortunately for Jesus, she went to federal prison in Colorado. From the available articles, it looks like Basso was never captured after he escaped from prison. So where did he go? I will pick this up in the next post.

Posted by Patrick Jones at 11:47 PM No comments:

The Girl from Hermosillo

Yesterday's post on Jesus Felix Campuzano helped uncover a fascinating story on his wife, Jesus Anaya. I am going to treat this story carefully. Regardless of what was in the news articles of 1915 & 1916, the story begins with a 16 year old girl from Hermosillo. There may very well be descendants of hers alive today.

Jesus Anaya arrived in Tucson in August 1911, visiting her older sister Luisa Anaya. This may have been a short visit, as she appears again in the US border crossing records arriving on foot in March 1912 to again visit her sister. She may have stayed in Tucson with this visit, as she next appears in the Arizona marriage records on 29 July 1913 with her marriage to Jesus Felix Campuzano.
Jesus crossed the border in May 1914, after visiting family in Hermosillo, Sonora. She returned through Nogales to rejoin her husband Jesus in Tucson. Their marriage did not last, and Jesus Anaya filed for divorce in 1915. Jesus Anaya remarried on 18 February 1916, this time to Louis Basso. 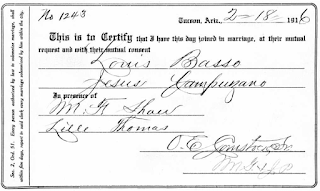 When I ran a search on Louis Basso, I was quite surprised to see that this marriage took place in jail. It took a little time to unravel some of the facts. We'll likely never know all the detail, although it looks like Jesus separated from Jesus Campuzano, met Louis Basso, and they lived together in Tucson. In any event she was still young at the time, just 19 or 20 when she met Basso. A news clipping from 21 December 1915 describes Basso as an Italian, held in jail on charges of bringing a woman from Mexico for immoral purposes. According to the article he had been arrested the previous week. The article says Basso "eloped with a woman who was the wife of another man." Jesus Anaya's divorce was granted in November 1915, so perhaps they did elope in Mexico before the divorce was finalized. A later article on the trial of Basso helps make the situation a bit clearer.

Basso remained in jail while awaiting trial. On 19 May 1916, a jury found Basso guilty on two of three counts in his case. Jesus Anaya was a witness in the trial, and her testimony also got her into the press. The article below is from the Arizona Daily Star (20 May 1916), via Newspapers.com. I find the description of the jail house marriage to be pretty amusing. 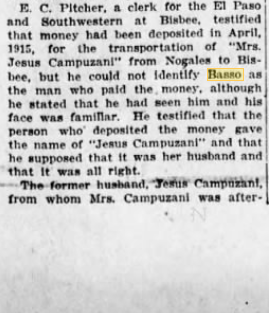 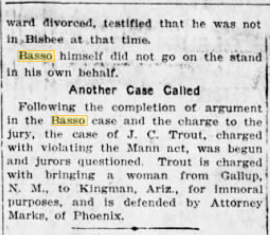 This is only the beginning of the story on Jesus Anaya. After the trial of Louis Basso, her new husband escaped from Pima County Jail in early June 1916 and fled the country. Perhaps the prosecutor wanted to make an example of Jesus as Basso had escaped justice. She was charged with perjury, and sentenced to jail for a year in federal prison in Colorado. She was 21 years old at the time. 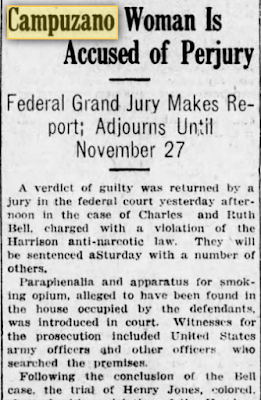 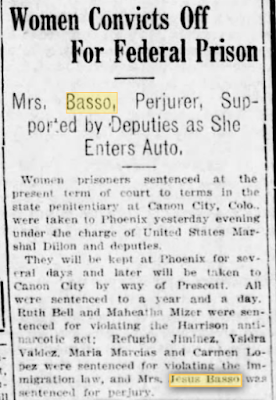 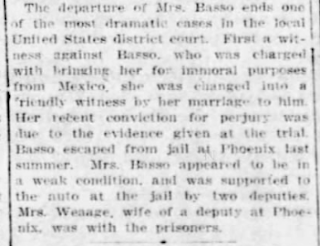 The next post will look at the jail break from Tucson.
Posted by Patrick Jones at 9:30 AM No comments:

In last Thursday's post, I introduced the family of Jose Jesus Campuzano. With this post I am going to dig into the story on Ataulfo Campuzano's older brother Jesus Felix Campuzano. He was likely born in Mexico around 1888 or 1889. His World War I draft card lists a birth date of 28 February 1890, but I don't think this is accurate as their brother Alfredo Campuzano was born in March 1890 and Alfredo's birth is verified in Sonora Civil Registration Records.
The address on Jesus Campuzano's draft card matches up with the address for his parents' home, 267 S. Stone Avenue in Tucson. His occupation is listed as blacksmith.

Jesus married 18-year old Jesus Anaya on 29 July 1913 in Tucson, Arizona. Their marriage was short-lived, and she filed for divorce in mid 1915, perhaps after he pled guilty to grand larceny in 1914. 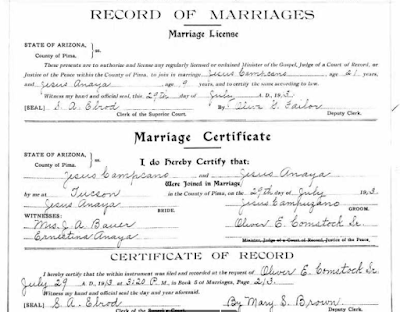 I thought this might have been the end of the story on Jesus and his former wife Jesus Anaya. However, when I was running searches within Newspapers.com, I uncovered a 1915 scandal involving Jesus Anaya, which became a sensational court case involving accusations of perjury, a jailhouse wedding, violations of immigration law, a prison break and more. The story is too crazy not to cover on the blog. I will write about this in the posts to follow.

Posted by Patrick Jones at 10:08 PM No comments: