Enjoy a weekend of mellow fruitfulness.
Posted by Patrick Jones at 9:51 AM No comments:

Friday Photo - Above the Beach


The snapshot above comes from the YouTube video our real estate agent made for the sale of our condo in Santa Monica. I thought it was a cool shot, worth sharing as our weather is turning colder here in Northern Virginia.
Posted by Patrick Jones at 4:29 PM No comments:

Below is a letter sent by my 2nd-great-grandfather Uriah Lamon to Margaret Elizabeth Pursley Austin, the daughter of his niece, Daisy Lamon. The letter was written 15 May 1940. On the first page, he is writing about his son George, who had moved to Huntingburg, Indiana. 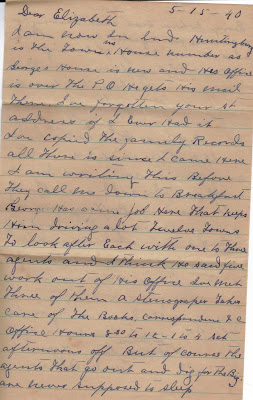 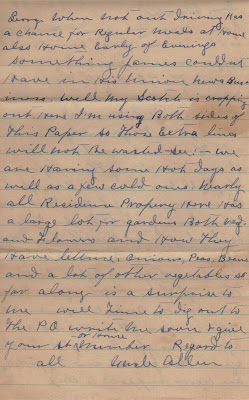 On the reverse, he notes how he is writing this letter while drinking a scotch and saving paper by using both sides. He continues describing the vegetables going in the garden - lettuce, onions, peas, beans and others. Anyway, it is interesting to see a letter in his own hand, writing about daily life as part of an extended conversation through the mail with family.
Posted by Patrick Jones at 9:56 AM No comments:

Posted by Patrick Jones at 3:18 PM No comments:

Last month, distant cousin Gladys sent me a trove of photos, postcards and letters from the Lamon side of the family. Below is a letter written in July 1966 by my great-grandmother, Blanche Lamon O'Brien, to her cousin, James P. (Mike) Lamon. It is a touching letter, referencing my Gumpy, my grandmother, Blanche O'Brien, and my parents before they were married. At the beginning of the letter she writes about receiving notice of the death of a distant cousin of theirs in Idaho, Joseph Harvey Eugene Lamon. He was a son of Lewis Putnam Lamon, Blanche's uncle. Lewis was a son of David D. Lamon, my 3rd-great-grandfather. This information helps connect up distant branches on the Lamon tree. 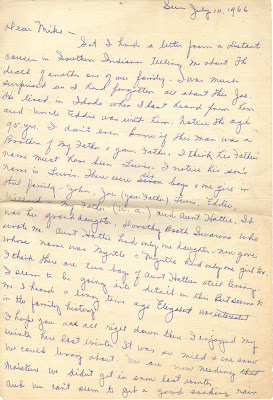 At the bottom of page 1, she shifts into writing about the weather and mentioning her visit to Florida the previous winter. At the top of page 2 she continues describing the Indiana summer heat. She also mentions Hurricane Alma, which hit the US in June 1966. She then returns back to giving an update on her family. She mentions son Harry O'Brien Jr and her granddaughter, who was married in June 1965. She also mentions Harry's son Mike, racing speed boats, and her youngest son Lowell, who had bought her old house in Broad Rippe on the White River. Then she mentions my Gumpy and 2nd wife Jeanne (my Nana), and how they were vacationing in Canada. At the end of page two, she turns to writing about my Dad. 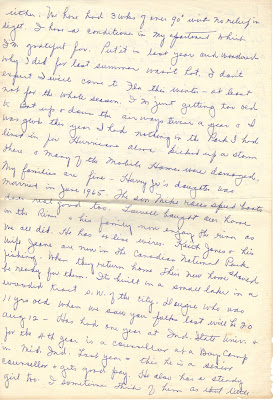 Blanche writes about how my Dad handled the early death of his mom, Blanche's daughter, and how he was then dating my Mom. This was two years before they got married. It is a heartfelt letter and we're lucky this survived to be shared 51 years later. Thank you for sending this to me Gladys. 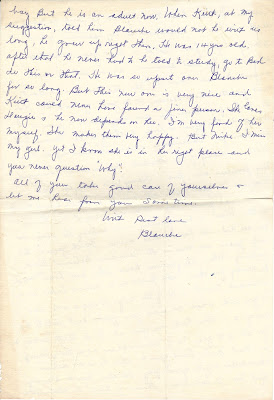 Posted by Patrick Jones at 8:28 AM No comments:

Below is a June 2013 article that appeared in the Greenwood Southsider on my Dad's boatbuilding workshops. The article references his boatbuilding class at the Indiana State Museum, which I described in my blog back in 2012.

My Mom is in the process of going through old photos and articles, and sent these along to me for preservation.
Posted by Patrick Jones at 2:17 PM No comments:

For the past two weeks I've been in the Middle East, attending meetings in the United Arab Emirates. I'm now back, and have quite a bit to catch up on. Blogging has been slow in October and so far in the new month. This is partly due to distraction from the prep for our annual general meeting, which rotates by region around the world. I've also been focused on getting our condo back in Santa Monica on the market for sale.
Research wise I have a copy of a case file from the Indiana State Archives involving my 4th-great-grandfather Manuel Lamon. I will report on that case in the next few days.

I also have some great travel photos from Abu Dhabi and Dubai, and I have some cool drone photos above our Santa Monica place.

As usual, more to follow, even if my blogging pace has slowed somewhat.
Posted by Patrick Jones at 3:43 PM No comments: