Earlier this month I wrote about the quilt made by Ursula Fellme Muck in the Indiana State Museum. Before I write about the Muck and Fellme families in Harrison County, Indiana, I need to work forward and write about the Lamon family of my 2nd-great-grandfather Uriah Lamon and my great-grandmother Blanche Lamon. 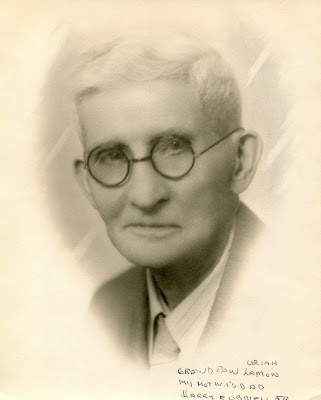 Uriah was born in June 1854 in Harrison County, Indiana. He was the son of David Detrick Lamon and Permelia Smith.

In 1870, Uriah is in the household of his parents, David and Permelia, in Scott Township, Harrison County, Indiana.

Sometime between 1870 and 1880, Uriah moved from Harrison County to Gibson County. In 1880, Uriah appears as a laborer in the household of J.W. Emmerson in Montgomery Township, Gibson County, Indiana.

Uriah married Anna L Smith in Gibson County, Indiana on 9 November 1884. Uriah and Anna had at least the following children:

Interestingly, the Lamon family show up in McMinnville, Warren County, Tennessee in the 1900 US Census. Uriah is listed as a farmer. I'm not sure why the family went to McMinnville, but they did not stay in Tennessee.

By 1910, Uriah and Anna had returned to Fort Branch, Gibson County, Indiana, to live with Anna's father Jesse Smith.

In the 1920 Census, Uriah and Anna were living on Walnut Street in Fort Branch.

I have not yet found Uriah in the 1930 or 1940 Census. I do know that he died in 1945 and is buried in Gibson County. An old photo of Uriah and Anna's tombstone is below. 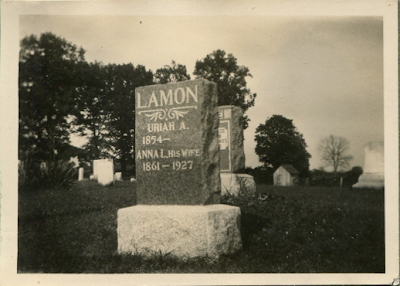 Posted by Patrick Jones at 9:59 AM