The annual Rootstech Conference starts today in Salt Lake City. Ancestry has conveniently launched some new features to its AncestryDNA product and main Ancestry tree. Two of the features can be found on the top left drop-down under "Extras", and then click on Ancestry Lab. The first feature is called MyTreeTags. This allows one to add labels and tags within your Ancestry tree, creating searchable tags and notes on the Facts pages for the people in your tree.

The next feature is New & Improved DNA Matches. By enabling the feature one can more easily sort, group and view DNA matches. This does seem to be a big improvement. I was able to create color-coded groups for my main family lines and then place DNA matches into the groups that I made. This also highlighted several new matches who had a Common Ancestor with me.

The third new feature is ThruLines, and appears to be a replacement or an evolution of the DNA Circles feature. ThruLines seems to be pretty cool. I have some screen shots below which shows how this looks. Back in August 2017,  I was trying to reverse engineer some AncestryDNA connections on the Amado line. Now when I look up my 5th-great-grandfather Jose Jesus Amado, I can see there are 18 DNA matches on the line of Jose's son Jose Santos Amado, and 10 DNA matches on the line descending from my 4th-great-grandfather Jesus Amado. That's very helpful.
Here's another example. In October 2014 I wrote about an exchange over email with a researcher who was trying to confirm a connection between Arena Louisa Thornhill and my 5th-great-grandmother Sarah Westall Thornhill. This researcher died in 2010. Using the ThruLines feature, I can now visualize the DNA connections descending from Sarah, showing three DNA matches descending from Arena Louisa.
This is incredibly useful for researchers, and can potentially breakdown walls for adoptees. I also compared some of the ThruLines from my AncestryDNA results and those I administer for others in the family. Here's an example of what I see when I look up my 4th-great-grandfather Robert Thomas Jones.
My sister sees some slightly different matches.
Our Dad's results showed an even larger set of matches. This is expected.
This is quite an update to the AncestryDNA functionality and I'll have to spend more time looking at this new feature.
Posted by Patrick Jones at 5:36 PM No comments:

The youth basketball season is coming to a close for our son. Saturday will mark the end of the season, with a chance to even their record. It has been fun to watch the scrappy group. Our #5 in the photo above has played pretty well, often serving as the ball handler up the floor and is showing signs of being quick to attack the basket on a breakaway.

I'd like to think he inherited this skill from me, or more likely from his Uncle Brian and my great-grandfather Edgar Lawrence Jones. Edgar was part of the Indiana State Champion Thorntown basketball team in 1915. I have covered this before on the blog, but looking back at my earlier postings reminds me to remind our son of this heritage when he is older.

My great-grandfather was not a starter, and he likely played the role of pressuring the starters in practice more often than helping Thorntown win games against other schools. Their team came from a town with only 1600 people and 120 boys in the school. Thorntown won their title after bouncing back from a slow 2-3 start. Along the way to the State Championship they had to beat several teams that had taken them down earlier in the year. One of those schools, Rochester, had beaten Thorntown in January 1915 by a score of 40-26. The next game the coach used mostly subs, and Thorntown won 42-16. I'd like to think Edgar had a hand in that victory. They later got revenge on Rochester, winning a close contest 17-14 in the second round of the State Tournament. Thorntown won the championship on the court at Indiana University in Bloomington. 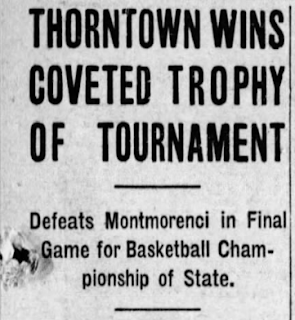 The championship victory meant quite a lot in the town, as one can see from the clipping above. Stores, banks, the public library and schools were closed on the afternoon of 15 March 1915 in celebration. This was also Edgar's 19th birthday.
Posted by Patrick Jones at 2:44 PM No comments:

Visit to the Louvre Abu Dhabi

Last week I was in Dubai for a conference. At the end of the week I had a bonus day before my 2am flight back to the US, so I took the opportunity to visit the amazing Louvre Abu Dhabi. The building is really impressive, with its large dome of interlocking stars creating interesting light patterns and shadows on the exhibition spaces below.
I spent about three hours there, which was more than enough time to take in the exhibitions and enjoy a bite to eat. The current exhibition is Rembrandt, Vermeer and the Dutch Golden Age.

Posted by Patrick Jones at 10:07 AM No comments:

My last post looked at the family of Samuel B. Read. I'm now turning to Samuel's Civil War service record. This document shows he entered as a 2nd Lieutenant in Company G, 8th Kentucky Cavalry on 13 August 1862. He was 40 at the time. According to the service record, he resigned on 28 November 1862 "because of ill health." The service record includes a letter of resignation that provides a bit more background to this request. A commanding general accepted the resignation, stating Read "is by no means an honor to the service and his presence with his company is demoralizing to the men." 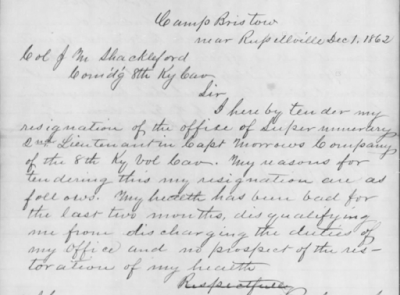 Samuel's letter of resignation indicates he had been sick for two months, but he had also served the whole time without pay. The file also shows Samuel's letter was tendered at the request of his commanding officer, who said "it is impossible to have an efficient regiment without effective line officers and this officer is duly insufficient."

It looks like there is a Widow's Pension application on file at the US National Archives. I have not yet had a chance to view this, and may not anytime soon. Descendants of Samuel B. Read and Mariah Utterback Read will certainly want to view this file.
Samuel had two other brothers who appear to have served in the Union Army, Isaac Franklin Read and James William Read.

Posted by Patrick Jones at 7:51 AM No comments:

My previous post returned to the story of America Parrish Chase and her connection to my 4th-great-grandmother Emily Ballard Read. I am now going to look closer at the family of Emily's son, Samuel Benjamin Read. Samuel was a brother of my 3rd-great-grandfather Guilford Dudley Read.

Samuel was born in Culpeper, Virginia on 4 August 1822. He married Mariah Louisa Utterback in Culpeper on 8 August 1842. Samuel and Mariah appear in the 1850 US Census in Shenandoah, Virginia. Samuel is listed as a teacher, with two children. I have a hard time reconciling his profession as a teacher with being a slave owner. In the 1850 Census, Samuel appears as a slave owner, very likely of a young family.
Sometime between 1850 and 1860, Samuel and Mariah relocated to Barren County, Kentucky. After the outbreak of the Civil War, Samuel was drafted in the Union Army in 1862. This is surprising given he was a slave owner. There is a file on his service on Fold3, and a pension file listed at the US National Archives. Samuel was a Lieutenant in the 8th Kentucky Cavalry. It appears he resigned in December 1862. I will have more on this in another post.

According to tax records, in 1864 Samuel ran a hotel and was a retail liquor dealer in Edmonson County.

Samuel died in 1869. His widow Mariah was head of household in the 1870 US Census in Edmonson County, Kentucky, living with daughters Emma and Laura.

Posted by Patrick Jones at 10:52 AM No comments:

Picking up an older story

Back in March 2012, I wrote about my 4th-great-grandmother, Emily Ann Heslop Ballard, and a woman named America Parrish who was living in her household in 1870. Inspired by Dr. Henry Louis Gates Jr.'s series Finding Your Roots, I am revisiting these two.
I knew America Parrish had married Thomas Chase on 3 December 1870, but I did not have a copy of their marriage record. As a reminder, in 1870, America was a 22-year old black domestic servant for Emily. When I wrote the post back in 2012, I don't think I was able to find out where America came from. Now I have a theory.

Emily's son Samuel B. Read died in 1869 in neighboring Edmonson County, Kentucky. Samuel appears on the 1860 Federal Census Slave Schedules as a slave owner. I think it is very likely the 11-year old girl listed in the slave schedule was America. I also think that after the end of the Civil War, Emancipation and the death of Samuel, America came into the household of Emily.
Given America's last name was Parrish and not Read, I looked to see who might have been her original owner. Parrish is a common name in the slave schedules for Barren County, Kentucky in 1850. Two look like a potential match. William W. Parrish had 26 slaves in 1850, one was a 2-year old girl, another was a one-year old girl. Nathaniel Parrish (who appears to be William's brother) had 15 slaves, two of which were one-year old girls. Back in 2012 I had thought perhaps America came to Emily's household via her brother Rice Carter Ballard, a known slave trader in Virginia. It now appears that America was born in Barren County, Kentucky and came from one of the Parrish plantations prior to moving to Samuel B. Read.

I thought it important to look back and see if it was possible to resurface America's early days as a young girl who grew out of slavery. This can be difficult history to revisit. In this month, Black History Month in the US, it is important to recognize these types of connections exist and were much more prevalent in this part of Kentucky than has been reported.
Posted by Patrick Jones at 9:44 AM No comments:

As the calendar turns to a new month, I am looking out the window into a snow globe here in cold Northern Virginia. We have about an inch, approaching two, on the ground. The photo above is from last month's around the world trip, taken while on a morning run in Singapore. I went on a morning run again here too, but it was in 20 degree temperatures and a dusting of snow, instead of the 80+ degree weather I experienced in tropical Singapore.

I'm counting down the days to another set of meetings in a warmer location later this month. More photos to follow.
Posted by Patrick Jones at 12:01 PM No comments: