I previously posted about the Read family migration from Culpeper, Virginia to Barren County, Kentucky, and about the Valentine's Day Wedding of Charlie Read and Mary Alice Cain. Their marriage bond included a note signed by Guilford Dudley Read, 5th child of William Freeman Read and Emily Ann Heslopp Ballard. Guilford (he went by G. D. or Dudley) was born in Culpeper, Virginia on 7 August 1828.

In the 1850 US Census, the family appears in the First Division of Barren County, Kentucky. Guilford appears as a 20 years old farmer in his parents household.

In the 1860 US Census, Guilford appears as G.D. Read, 30 year old farmer and head of household, living next door to his parents and siblings.

When the call to join the Confederacy came in 1861, Guilford joined the Kentucky 6th Mounted Infantry at Cave City, Kentucky. He was supposed to muster into Company E as a private on 7 October 1861. His muster roll notes that he was absent, "sick with leave near Bowling Green." We don't know whether he was really sick, or if this was a ruse to stay out of military service. 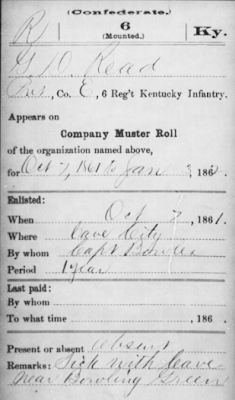 On the next available muster roll, it appears to show that he enlisted on 4 November 1861 in Bowling Green. Guilford is shown to be 32 years old, and 5'11". 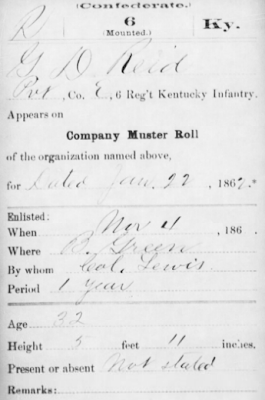 The next muster roll page shows that Guilford left the company at Bowling Green due to sickness on 13 December 1861. The page after this one states he was sent to a hospital in Bowling Green. 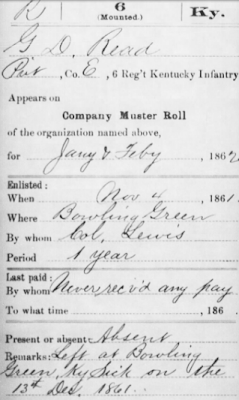 The final page dated Nov-Dec 1862 in the roll states that Guilford was listed as a deserter, and that he never returned to the company or heard from again after they left Bowling Green. This probably saved his life, as Guilford lived a long life in Barren County from not fighting in battle during the Civil War.

In 1870, Guilford and family appear in Glasgow, Barren County, Kentucky. He is shown as a butcher.

In 1880, he was shown as a farmer and butcher, so it is likely that he raised his own animals (cows, pigs) that he sold in his butcher shop. From the earlier post on Charlie Read's wedding, Guilford had brought his sons into the family butcher shop business by 1895.

By the 1910 Census, Guilford had turned over the butcher shop to Charlie, but was still active and working as a gardener. His occupation was listed as "truck gardener".

Guilford lived a long life, worked hard, operated his own business, and raised a large family.
Posted by Patrick Jones at 10:14 AM