Migration of the Read Family to Kentucky

According to the “Read Bible”, from Bible and Family Records of Barren County, KY and Surrounding Areas, Vol. 1, by Eva Coe Peden, pg. 145-146 (and available on the Internet at http://www.barrencoky.com/bibles/ReadBible.htm, last checked on 12 February 2012), “William F. Read, son of Samuel Read and Julaner his wife, was born February 3, 1799. Emily A. H. Read his wife was born August 2, 1802.”
William Read married Emily Ann Heslopp Ballard on 13 September 1820 in Culpeper County, Virginia. I will have quite a bit on Culpeper County and Virginia involving the Read, Ballard, and Whitley/Wheatley lines this month.
“Infant daughter born July 30th 1821
Samuel Benjamin Read was born August 4th 1822
Ann Julaner Read was born August 7th 1824; married W.H. Tomlin at Glasgow, Ky., April 7th 1848, without my consent of my knowledge ----W.F. Read

My best estimate on the possible migration route for William and family is below. My assumption is the family crossed the territory of present-day West Virginia and picked up the Ohio River at Huntington, West Virginia, and then followed the Ohio to Louisville. 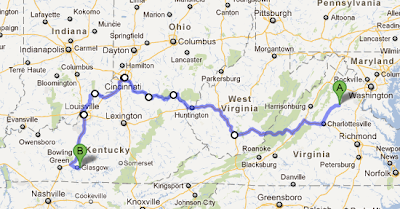 In the 1850 US Census, William and family were listed in the First Division, Barren County, Kentucky. 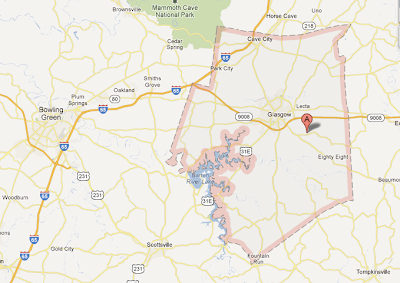 Posted by Patrick Jones at 8:21 AM