The Civil War pension file of Thomas W. Thornhill included the widow's pension application for Leah Hart Thornhill. Leah was 24 years younger than Thomas, born on 19 July 1853 in Jefferson County, Tennessee. The couple were married on 15 November 1893 in Hamblen County. A copy of the marriage certificate was in the pension file.
They appear together in the 1900 US Census in Jefferson County.

Thomas died on 10 June 1909, and Leah began to receive a widow's pension after her application was approved.

The file contained a handwritten note from Leah to the Bureau of Pensions, asking that the monthly payments be increased in line with a Widow's Pension bill approved by Congress. This increased her monthly payment from $30 to $40. 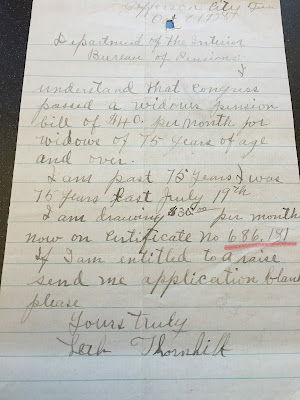 The monthly widow's pension was later increased to $50. 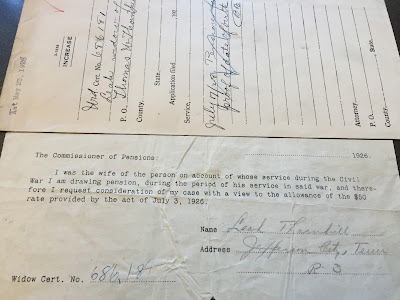 Leah and Thomas never had children. After his death, Leah worked in the homes of her nieces and nephews, assisting them with raising their children. Leah Hart Thornhill passed away on 21 February 1932 in Jefferson County.
Posted by Patrick Jones at 8:51 AM No comments:

In support of his kin

Today's visit to the US National Archives uncovered some new finds on my Jones and Thornhill sides of the tree. I took advantage of a post-meeting staycation day to view the Civil War pension file of Thomas W. Thornhill, son of Joseph Thornhill and Mary Polly Gass, a nephew of my 4th-great-grandmother Elizabeth Thornhill Jones. Thomas Thornhill and Joseph Jones, my 3rd-great-grandfather, were as close as brothers, so it was not a surprise to see Joseph appear as a witness for Thomas in his Civil War pension application. The file yielded several other gems, including a note handwritten by Joseph.
Thomas served on the Union side in Company C and L of the 1st Tennessee Cavalry during the Civil War. According to the surgeon's report in the pension file, Thomas was about 5 foot 5, with black hair (later turning grey), and dark blue eyes.

Both Thomas and Joseph Jones lost their fathers at a young age. The Thornhill and Jones families were very close and stuck together in support of each other throughout the Civil War. I have covered much of this previously in reviewing the various files on Captain John Thornhill. Thomas married Leah Warren Hart in Hamblen County, Tennessee on 15 November 1893. A copy of their marriage certificate was in the pension file. Leah was a sister of Martha Cordelia Hart, Joseph Jones' third wife.

On 29 October 1888, Joseph Jones wrote an affidavit for Thomas from Marysville, Blount County, Tennessee. He stated that Thomas became disabled in April 1863. Joseph and Thomas served in the same company.
The letter of 23 April 1889 provided additional testimony in support of Thomas' pension claim, along with a signature for Joseph. 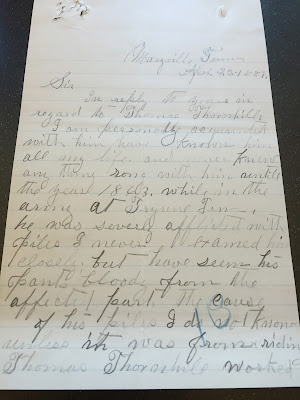 I believe this is the first time I have seen a handwritten letter by Joseph. It was quite cool to hold this letter, written by my 3rd-great-grandfather 126 years ago. There were more items in the file. In tomorrow's post I will write about Leah Hart Thornhill, Thomas' wife.

Additional item: While at the National Archives, a camera crew was filming with a celebrity for an upcoming episode of Who Do You Think You Are. It was pretty cool to see them use the 2nd Floor research room for a portion of this actor's story. I am looking forward to the episode later in July.
Posted by Patrick Jones at 3:59 PM No comments:

The photos in this set are from the past week in Buenos Aires, Argentina. It was my third visit to this wonderful country. I saw a bit less than the previous trip from February 2014, as meetings were more intense and the weather was different (Southern Hemisphere winter instead of summer).

Posted by Patrick Jones at 2:33 PM No comments:


Posted by Patrick Jones at 5:44 AM No comments:

On Wednesday I had a seven hour layover in Miami on my way to Buenos Aires, where I am now. I planned ahead and made the most of my layover by going on a long street art walk through the Wynwood Walls art district. This may be one of the best concentrations of street art I have seen so far in my travels. Wynwood Walls is really incredible. This is a first selection of photos from the walk.

Posted by Patrick Jones at 5:16 AM No comments:

Another tailor in the family

Celso Campuzano appears in the Tucson newspaper El Fronterizo in August 1887 as an agent of the mines for Altar, Sonora.

In 30 May 1891, Celso and family are mentioned along with "young Dn. Francisco Campusano" in the news from Altar, Sonora.
From El Fronterizo in 1895, Celso Campuzano is mentioned as a prominent citizen of Altar, visiting family in Tucson for 3 days.

Celso's sister, Emilia (appears as Amelia) married Bernardo Navarro and was living in Tucson, Arizona with family during the 1900 US Census. The census record shows that she arrived by 1891. Their brother Lorenzo appears as a boarder in the census record.

There's more on this family in the records from Altar, Sonora.

Posted by Patrick Jones at 4:26 AM No comments:

A tailor in Los Angeles

Yesterday's post traced Jose Maria Campuzano to California. He appears as a tailor in the 1880 and 1900 US Census. The City Directories for Los Angeles provide additional information on Jose and his years in the city.

Jose first appears in the 1875 City Directory, as a clerk living at 37 Upper Main.

In 1879, Jose appears as a tailor at 7 Spring Street (across from present-day LA City Hall). 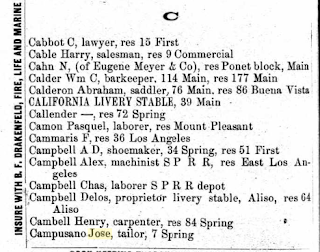 By 1882, Jose is listed as a tailor working with C. Jensen. There is another Campuzano who makes an appearance in this record, Frank Campuzano, a fireman with the Los Angeles Flouring Mills. I suspect he is a son of Jose's brother, Francisco Campuzano, but I cannot yet rule him out as a son of Jose. I have more work to do researching him. 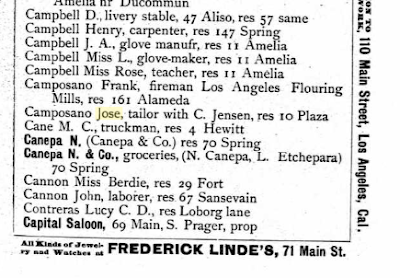 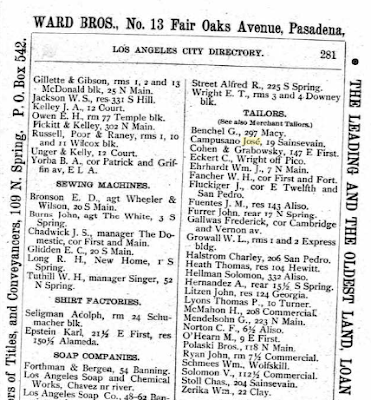 In 1887, Jose is listed as a tailor working with H. P. Allen, and residing at 19 Sainsevain. This matches up with the address in the letter published in El Frontierizo.

From 1891-1893, Jose appears in the City Directories working with G. Basserman, and residing at 353 Aliso Street. By 1895, Jose is listed at 147 N. Vine Street. The 1896 City Directory lists several Campuzanos. Conchita and Jose Jr are both children of Jose Campuzano, living at 147 N. Vine Street. Conchita would have been 21 years old, while Jose Jr would have been 17. I am not yet clear on the relationship of Ysidora and Frank A. Campuzano. 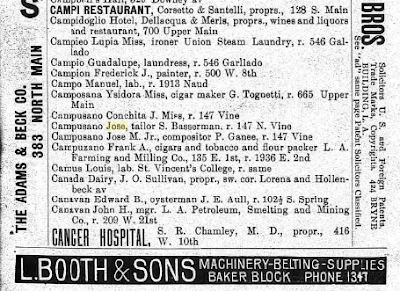 It looks like Jose died about 1901. In the 1902 City Directory, his wife Manuela appears as "widow of Jose M."

It is not yet clear if Frank A. Campuzano and Isadora Campuzano who appear in the 1896 City Directory are children of an earlier marriage by Jose or part of a different Campuzano family.
Posted by Patrick Jones at 8:34 AM No comments:

In Thursday's post, I wrote about the first family of my 3rd-great-grandfather Vicente Antonio Campuzano. I am now going to follow the documents on some of Vicente's children in this line. According to his immigration papers, Vicente's son Jose Maria Campuzano moved from Arizpe, Sonora to Los Angeles, California. He was an early arrival in LA after the Mexican War and California statehood, and he stated in his 1889 Declaration of Intention that he came to LA in May 1852.

Jose appears in the Los Angeles Herald on 6 August 1892, as part of a group of foreigners who had applied for citizenship.
On 23 July 1887, Jose wrote a letter that appeared in the Tucson, Arizona Spanish language newspaper El Fronterizo. In the letter, he listed his address in Los Angeles in order for his siblings in Tucson to be able to find him. I think this is an important find because it shows a connection between Jose and Campuzano family in Arizona.
Jose married Manuela Dominguez in Los Angeles on 6 November 1874. The couple appear in the 1880 US Census in Los Angeles, living next door to Antonio Orfila and family. Jose is listed as a tailor. This seems to be a fitting profession for Jose to have followed, as his father Vicente was a shoemaker in Sonora.
By 1900, Jose and family appear in the US Census living at 145 Vine Street (on the corner of Sunset and Vine).

In the next post I will look at the City Directories for Los Angeles to fill in the gaps between 1880 and 1900, and explore the children of Jose and Manuela.


Posted by Patrick Jones at 7:00 AM No comments:

The Hermione is a replica of the ship sailed by the Marquis de Lafayette to America during the time of the American Revolution. It is the largest Tall Ship built in the last 150 years, and has been sailed this summer from France to the United States. The Hermione visited Alexandria, Virginia during the week starting yesterday and sets sail tomorrow for other stops along the East Coast. So naturally I got the kids (and my parents) out of school a bit early to go down to the Alexandria Waterfront to see the ship.

The ship was impressive. This is by far the largest tall ship I have seen docked at Alexandria. There have been other historical ships from Yorktown that have visited Alexandria, but the Hermione would tower over those ships. It is really cool and I wish it was staying through the weekend.

Posted by Patrick Jones at 10:18 PM No comments: