After spending the weekend in Southern Indiana, we're back in Northern Virginia. The long weekend gave us the opportunity to spend time with Allison's side of the family and drive through my old stomping grounds south of Indianapolis to Bloomington. We had a great visit with family, and I have brought back quite a few old photos and records from Allison's side of the tree.

In a fortuitous bit of timing, I am about to hit three of my states of residence since 1985 within a 24 hour period. This morning we flew back from Indianapolis to Northern VA, and tomorrow I will be flying to Los Angeles for a couple of days of meetings. This gives me some perspective on the concept of home.

For my middle school years through law school, I lived in Central Indiana. I attended Wabash College and Indiana University School of Law. While living there I frequently traveled the roads between Indianapolis and Bloomington. Over the weekend I drove some of those same roads, State Road 67 and 37, I-69, and passed through my old high school town of Martinsville, Indiana. While some of the sights were familiar - seeing Gray Brothers Cafeteria in Mooresville and the roads around Indiana University in Bloomington - a lot had faded from memory or was unrecognizable. Parts of Evansville seemed more current in my mind than the old neighborhood around Martinsville. The drives brought back some memories, but the area no longer feels like my home.

On this visit we did not have time to visit friends and family in Indianapolis. Other than driving to the airport, we didn't see the city, so perhaps some of these feelings would have been different around Downtown or in Indy itself.

Northern Virginia is where we live now, seven years removed from our residence in Santa Monica. But in the years since we returned to Alexandria, I have consistently gone back to LA several times a year for meetings at headquarters. We still own our condo in LA County, and continue to pay California taxes. I definitely feel at home in LA. Over the years my feeling of home in LA has grown, partly due to my historical connections to the city and family links to California. The feeling is also due to the years of living there and returning. LA is one of my favorite places in the world.

While this week's trip is short, I am looking forward to seeing family, colleagues and familiar places. I'll cap this post with a link to Best Coast's 2012 song The Only Place, a perfect ode to Los Angeles. See you tomorrow, LA.

Posted by Patrick Jones at 11:01 PM No comments:

The photos above and below show family reunions on the Freyling Farm from 1928 and 1921. 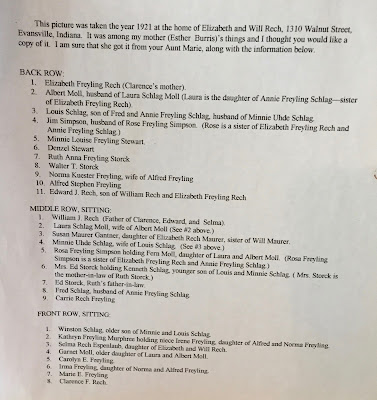 Posted by Patrick Jones at 4:00 PM No comments:


Happy Birthday weekend to our little guy. He shares a birthday with his great-grandmother, and we celebrated on the farm in Elberfeld, Indiana.
A bit of rain couldn't keep us down, and we managed to get in a hayride for all the cousins.

Last year's birthday post is available here.
Posted by Patrick Jones at 8:34 AM No comments:

Family on the Farm

Today I was able to pull copies of Freyling family land records in Warrick County, as well as John and Carrie's marriage record in Vanderburgh County. I will have a separate post on these records.

Posted by Patrick Jones at 8:57 PM No comments:

On the old farm


We're back in Southern Indiana this weekend for a family reunion on the Freyling side of the family. Above is a photo of the old Freyling farm in Warrick County. I'm planning to visit the Warrick County Recorder's Office in the morning to look at early land records and try to learn more about Stephen Freyling's arrival in America.

Allison's grandfather is the child on the rolling chair with his older sister Irma holding the hat on his head.
Posted by Patrick Jones at 9:16 PM No comments:


On our last afternoon in Madrid, we stopped into the famous Mercado de San Miguel for a snack of tapas and cava. In some ways this place had aspects in common with other markets I have photographed (see also Grand Central Market in LA), but the quality and liveliness of the place puts it in a class of its own.
We loved the empanadillas (unfortunately no pictures, these were gobbled up quickly), and cheese samples, which paired well with the cava. We will definitely return to the Mercado de San Miguel on a future visit to Madrid. Highly recommended!
Allison snapped a few of her own photos on a visit to the Mercado earlier in the week, which I add here.

Posted by Patrick Jones at 8:14 PM No comments:

While in Madrid we had the chance to venture over to the Lavapiés neighborhood looking for street art. We were able to catch recent murals by Alice Pasquini, AddFuel (Diogo Machado), Nuriatoll, and others across the street from the Swinton & Grant gallery. These were painted in June 2016 as part of Muros Tabacalera.

Posted by Patrick Jones at 9:00 AM No comments:


Here is the second set of photos from our day trip to Segovia on Monday. The Alcázar of Segovia looks like a fairy tale castle, and was an inspiration for the castle in Disney's Sleeping Beauty. The fortress is surrounded by a moat and sits in a prominent location over the valley guarding the entrance to Segovia. The site has been a fortress since Roman times. Isabella of Castile later ruled from the fortress in Segovia.

Posted by Patrick Jones at 2:35 PM No comments:


During our trip to Spain we drove from Madrid to Ribera del Duero, stopping roughly halfway in the historic city of Segovia to see its famous sites - the Roman Aqueduct, Cathedral and Alcázar. The aqueduct dates to 98-112 CE and provided water to the city as recently as the 19th Century. It is quite stunning to see in person.
After walking along the aqueduct, we entered the old city to continue on to the cathedral. The massive Gothic cathedral was built starting in 1525 and completed in 1768.
My next post will continue with photos from the Alcázar, the fortress castle and palace in use from Roman times to Spanish kings.
Posted by Patrick Jones at 5:47 AM No comments: