This month I have been highlighting my Granny's family, their arrival in the US and roots in Sonora, Mexico. Yesterday's post included the family's July 1929 visit to Nogales, which referenced Manuela's original arrival in the US on 28 November 1922. Last month I also featured the family from the 1940 US Census, with a copy of Manuela and Plutarco's wedding photo from 1923.

The original border crossing record from 28 November 1922 is a fantastic find. It shows that Manuela and her mother, Teresa Diaz de Portillo, had been living in Nogales, Mexico (very likely with Teresa's sister Maria Diaz de Mirazo) before they came to Tucson. It also shows their intended stay in the US was for 2 months, and that they were going to visit their cousin, Cleotilde de Montano. They crossed the border on foot, with only $20. 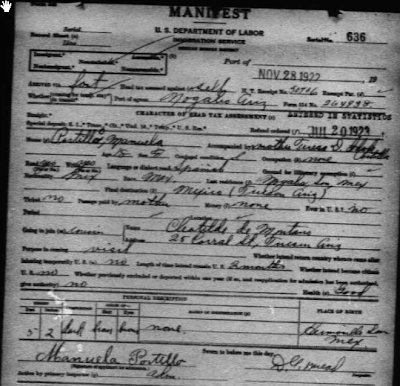 I am not certain of the family connection between Cleotilde and Teresa, but I have found Cleotilde's death record on the Arizona Department of Health's genealogy search site. She was born in Chihuahua, Mexico in 1866 as Cleotilde Lopez, and she died in Tucson on 7 May 1946. Another interesting bit of history is they wrote down Cleotilde's address as 25 Corral Street in Tucson. From the 1922 Tucson City Directory, her address was actually 52 W. Corral Street, and that she worked at the Tucson Steam Laundry. Perhaps she was connected through the Portillo side of the family.

The record lists Manuela as single at the time of the visit. We do know that Manuela and Plutarco Campuzano were married on 1 December 1923, so it is likely they met in Tucson, in Barrio Viejo after her arrival in the US.

Manuela was born on 31 May 1905 in Hermosillo, Sonora. Her father was Manuel Portillo. I don't know very much about him. Manuela's mother Teresa was widowed by 1922 when they crossed into the US.

Teresa's record was filed along with Manuela's, on 28 November 1922. Her signature on the bottom of the manifest shows a flourish of old Mexico in her hand. 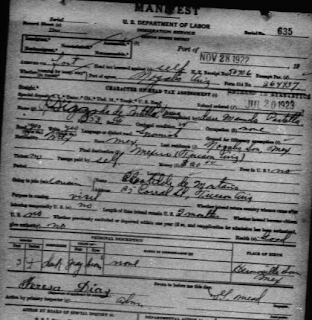 Teresa Diaz was born in early 1867 in Hermosillo, Sonora. She was the daughter of Jesus Dias and Maria de los Delores Quijada, and baptized at the Catedral de la Asuncion in Hermosillo on 6 February 1867.

According to the Tucson City Directory, by 1923, Teresa was living at 171 N. Court Street in Tucson. Plutarco Campuzano does not show up in the City Directory until 1927, so it is likely that Manuela and Plutarco lived with Teresa Diaz de Portillo from 1923-1927. Teresa continued living with the Campuzanos until her death in 1940.

I am still amazed by the find of the supplemental questions answered by Teresa in the 1940 Census. Married by 1887, 10 children over her lifetime. I have already found a few of Manuela's siblings in the Border Crossing records, and have a few more stories of interest to share coming up.