Welcome.us is kicking off the first Immigrant Heritage Month beginning on 1 June with a national effort to collect and share inspirational stories of immigration in America. I think about my great-grandfather Plutarco Campuzano's journey to the US from Mexico, and I am reminded about how impressive these initial steps were for him to make.
At the age of 14, in January 1915, Plutarco crossed the desert on foot, walking 60 miles from Altar, Sonora to the border crossing at Sasabe, Arizona. He may or may not have been with his brother Vicente Campuzano Jr, or other family members, but I don't have this information. From Sasabe it is another 70+ miles to Tucson. He later made that same journey many times, returning to Altar and Pitiquito from Tucson to visit family who remained in Mexico. I have this information from Plutarco's Alien Case File via US Citizenship and Immigration Services (see below) and from the Border Crossing records. 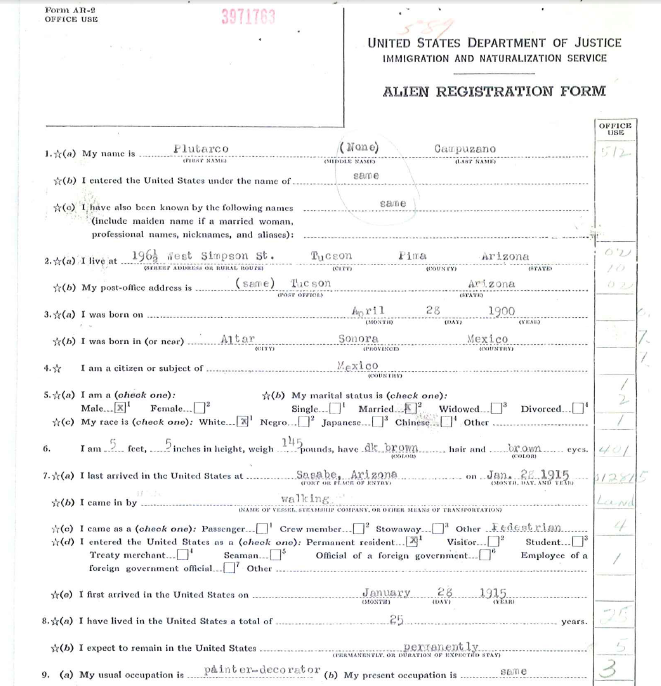 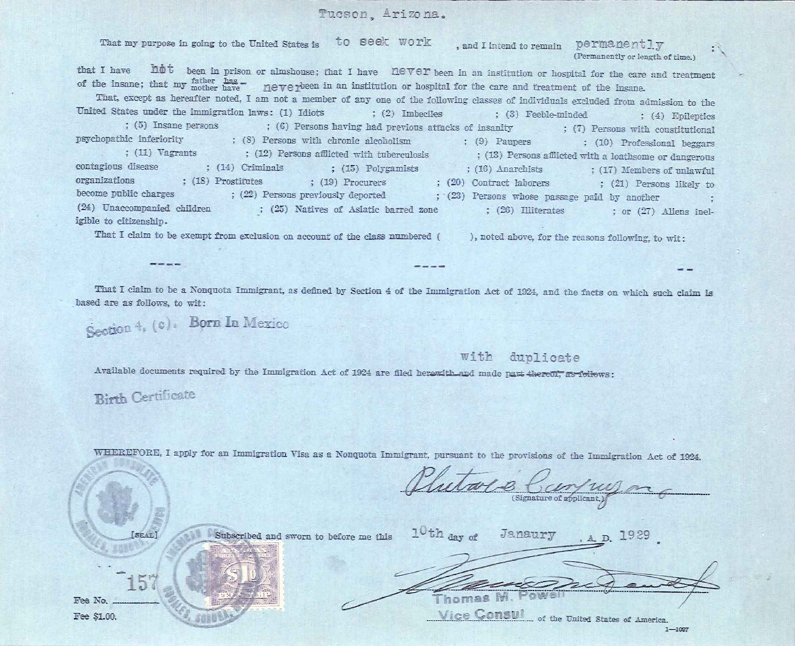 When Plutarco first arrived in the US in 1915, I think he would have joined his father Vicente Plutarco Campuzano in Phoenix/Tempe, Arizona. During this time, Vicente was active with Liga Protectora Latina, a Mexican mutual aid society formed to provide financial support to unemployed and ill members, funeral costs, education and social assistance as well as labor and civil rights for immigrants. In July 1915, Vicente had been elected Sargeant-at-Arms for the Liga's Lodge #1 in Tempe. One hundred years ago, my 2nd-great-grandfather was helping smooth a path for others like him, who wanted to come to America for a better life.

"Uno para todos, todos para uno" was the motto of the Liga Protectora Latina, and they followed the principles of protection, equality and justice. The organization only lasted a few years in Arizona, but it had an enduring impact in the history of Latino civil rights. Vicente later moved back to Altar in 1917 but continued to visit family in Arizona through his remaining years.

Plutarco's Alien Case file shows that he lived in the US as a permanent resident, although he may not have become a US citizen. Plutarco worked as a painter and lived in Tucson until he died in September 1996. His descendants are now spread across the US, and work in a variety of fields. All possible because of a first walk through the desert, and a supportive community to welcome him.
Posted by Patrick Jones at 9:07 AM