My second-great-grandfather on my Granny's Campuzano line was Vicente Plutarco Campuzano. He was born on 10 May 1862 in Pitiquito, Sonora, Mexico, a small town between Caborca and Altar in the northern part of Sonora. We owe quite a debt to the Border Crossings, Mexico to US 1895-1957 database for our understanding of the connections between Vicente and other members of the Campuzano family on both sides of the border. 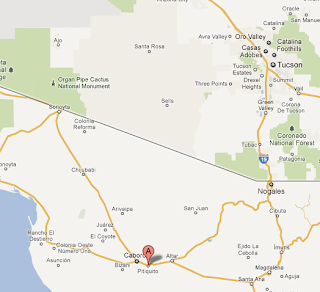 Pitiquito is home to the San Diego de Pitiquito Mission, which was built between the 1760s and 1780. 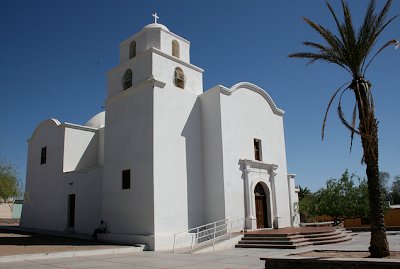 Between 1913-1916, Vicente lived in Phoenix, Tempe and Tucson, Arizona. What I don't know right now is if this was with Maria Jesus Vasquez de Campuzano, on his own, or with other members of the family. According to the US City Directories Database, Vicente's address in 1915 was at West 8th Street, Normal (Tempe). This was very close to Arizona State University.

Vicente's son Jesus was living in Tucson in 1917. His World War I draft card from 5 June 1917 states that he was living with his mother, was single, and working as a blacksmith for "A. Vasquez". In the 1917 City Directory for Tucson is a blacksmith, A. Vasquez and Son, located at 307 W. Congress in Tucson. A few pages into the directory it shows this to be Adolfo and Roul H Vasquez, and that their residence address was 438 E. 6th Street, and that Adolfo's wife's name was Amelia. There's more work to be done with this information and I am hoping it leads to an explanation of what happened to Vicente's first wife.

Vicente appears in the 1930 Mexico National Census (taken on 15 May 1930) in Altar, Sonora at the age of 67. The family was living on Calle Zaragosa. Vicente's occupation is listed as "Carrosero", which translates to "carriage maker" or car body maker, which is curious given that he appears as a butcher in border crossing records about the same time.

Border Crossing Records
On 18 February 1918, Vicente crossed the border at Nogales. We have a fantastic record of this crossing. It shows he had arrived on foot, and was born in Pitiquito. It lists his height (5'10''), complexion, gray hair, and brown eyes. His occupation is listed as merchant, and he could read and write. He was carrying quite a large amount of money for the time, $300 (actually, that's a lot of cash to carry today...) 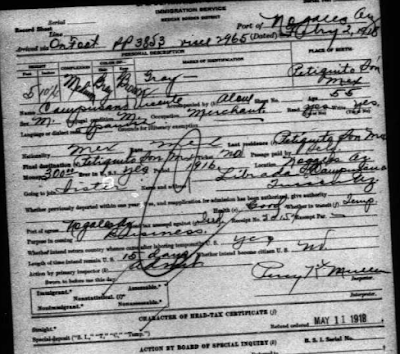 He was on his way to visit his sister, Librada Campuzano in Tucson, Arizona, but the purpose of the visit is listed as business. The length of the visit was to be 15 days. The record also shows that he had been to the US previously, in 1916.

On 29 June 1929, Vicente crossed the border at Sasabe, with son Manuel Campuzano. They were on their way to visit Vicente's son Jesus Campuzano, who is listed as living at 210 Convento (Convent) Street in Tucson. Today this is approximately the location of the Museum of Contemporary Art, the part of Barrio Viejo torn down for the Convention Center in 1970.

Vicente's occupation in June 1929 is butcher, but this 5 day trip was for pleasure. His departure contact is listed as Beatris Palacio de Campuzano, in Altar, Sonora.

This record is also great, because it shows that Vicente lived in the US from 1913 to 1916, in Phoenix, Tempe and Tucson.

On 28 October 1933, Vicente crossed the border at Sasabe with son Plutarco for a 2 month visit to Tucson. 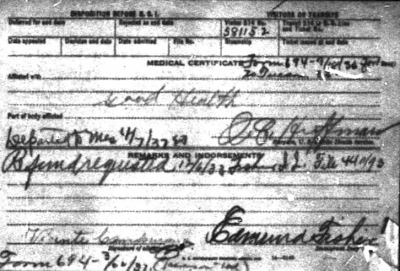 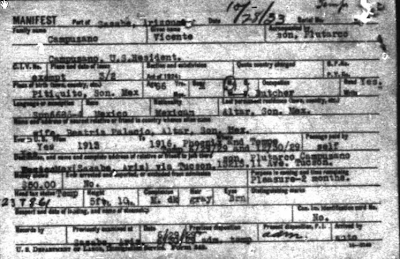 Vicente crossed the border again on 21 February 1940 at Nogales for a visit to daughter Maria Jesus Campuzano de Grijalva and family. It is very faint, but this record includes his signature: 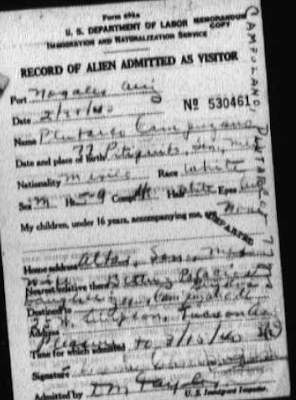 Updated 8 February 2016 - Corrected the citation on the painting above to correctly identify Maria Jesus Vasquez.
Posted by Patrick Jones at 5:17 PM