The Grand Jurors for the State by Samuel Lyle therefore and brought here into Court their Bill in these words to wit. The Grand Jurors for the County and State on their oaths present and say that Thomas Jones laborer late of said County at to wit at Jefferson in the County of Jefferson on the Seventh day of November 1797 with force and arms an assault did make in and upon the body of John Willson then and there being in the peace of the State and him the said John Willson did then and there beat wound and evilly treat and other wrongs then and there did to the great damage of the said John Willson and against the peace and dignity of the State of Tennessee.
D. Brazeale C.J. P. J.
Wheuopn the the said Thomas to the said charge pleaded not guilty, and thereupon came a Jury Court Archibald Ostin, James Baker, Lewis Harman, Jacob Harman, Andrew Russell, Jeremiah Rush, James Moyers, James Lillard, James Todd, James Neeley, William Selvy and Shadrick Inman who passed on said trial. Do say the Defendant is guilty in manner and form as charged in the Bill of Indictment. It was therefore considered by the Court that the said Thomas pay a fine of two dollars and the costs of this prosecution. 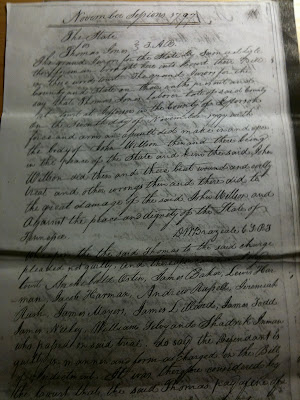 I estimate Thomas Jones would have been about 19 years old when this decision was issued. This would have occurred several months before he married Nancy Tucker on 30 June 1798.

In the Tennessee Tax Lists for 1800, there were two men named Thomas Jones in Jefferson County. One owned 12 acres of taxable property, while the other have 263 acres. I think the larger land owner was Thomas' father.

Another reference to Thomas Jones is from Land Deeds of Jefferson County, Tennessee 1792-1814.

Posted by Patrick Jones at 1:47 AM