My Jones family links in Tennessee predate the formation of the state. I have previously written about Thomas Jones and his land purchases in Jefferson County on the French Broad River (see An Island in the French Broad from 11 February 2012), the decision against him in the State of Tennessee vs Thomas Jones (post dated 9 February 2012), and the records from Dumplin Creek Baptist Church (post dated 5 February 2012). This post is to tie up loose ends and cover Thomas' story as best as I know currently. [UPDATED 29 Dec 2012]

Thomas Jones (my 5th-great-grandfather) was born in North Carolina around 1778, although it is unclear at this time if this was within the present borders of Tennessee or North Carolina. He married Nancy Tucker on 30 June 1798 in Jefferson County, Tennessee. From the Tennessee State Marriages, 1780-2002:

Nancy was the daughter of James Tucker and Jane, and was born in North Carolina around 1773. James filed a pension application from service in the Revolutionary War for North Carolina, and I will have more on him in a subsequent post. 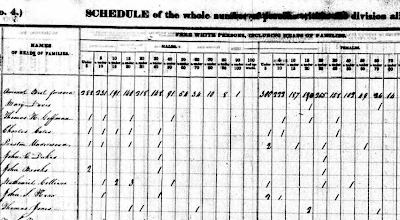 By 1850, Thomas Jones is in District 13 of Jefferson County. He is shown as 72 years old, a farmer, with value of real estate worth $600, and from North Carolina. Nancy is on the next page, with daughter Malinda Jones (age 24).

I have an unsourced death date for Thomas Jones in 1857. Nancy does not appear in the 1860 Census in Jefferson County, so I also assume that she died sometime between 1850 and 1860.