Between the Holston and the French Broad

The first occurred on 10 October 1821 between Thomas Cannon, and my 5th-great-grandfather Thomas D. Hickey. Cannon sold Hickey twenty acres of land between the waters of the Holston and the French Broad Rivers in exchange for 300 dollars. The image below comes from the New York Public Library Digital Collection. While the photo was taken on the North Carolina portion of the French Broad, this terrain is similar to the view that Thomas Cannon and Thomas Hickey may have seen during their time in Jefferson County.

Thomas D. Hickey married Thomas Cannon's daughter Rachel. The 1821 deed was witnessed by Thomas Cannon's son, John Cannon. I think this is a great find as it shows some of Thomas Cannon's land passing to the next generation in the family to the Hickeys.

The second deed occurred on 17 January 1823 between Thomas Cannon and Abraham Miller. Miller paid $150 to Cannon in exchange for 12 acres of land on the waters of the Nolichucky River. This river joins with the French Broad River in Jefferson County, Tennessee to form Douglas Lake.

It is interesting to see the closest neighbor to Thomas Cannon in the 1830 US Census in Jefferson County was Richard Thornhill. Thomas Cannon was probably well known to my 4th-great-grandparents Robert Thomas Jones Sr and his wife Elizabeth Thornhill Jones, where were married in 1824 and would have been regular visitors to Richard Thornhill's farm. 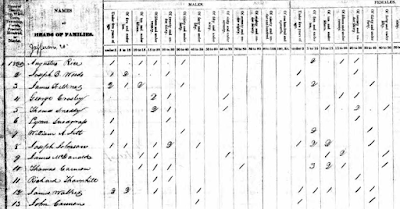 In the 1836 tax list for Jefferson County, Thomas Cannon appears in District 10 along with several of his sons.

Thomas also appears in the 1840 US Census in Jefferson County. He is listed as between 80-90 years old.

There is more on Thomas Cannon, which I will pick up in the next post.