Several of my Jones ancestors lived along the French Broad River in Jefferson County, Tennessee, on the border with Cocke County. At one point, Robert Jones' father, Thomas Jones, owned an island between 1810-1816 in the middle of the French Broad, across from Taylor's Bend (the land owned by Parmenus Taylor).

The French Broad River was altered by the construction of Douglas Lake in 1942. The land owned by Thomas Jones is probably under the lake today. See the map below: 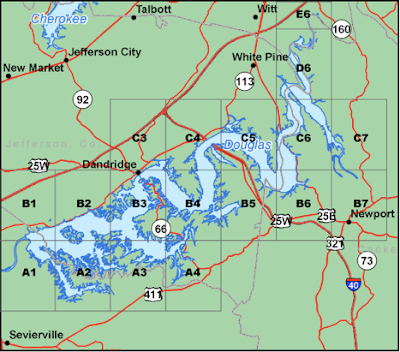 I'll have an upcoming post on the shifting county lines of Jefferson and surrounding counties.
--

Map Source: http://www.tva.gov/environment/reports/dnlp/douglas_map.htm
Posted by Patrick Jones at 5:00 AM