Seeing the photo of my 2nd-great-grandparents Vicente Campuzano and Maria Jesus Vasquez sparked another dive through the Sonoran records this week. Thanks to helpful researcher Raclare, I now know about an engagement involving Vicente before he married Maria Jesus in May 1890.

The photo above is not Luciana Parra, I am using this image from the Mexico Historical Postcards database on Ancestry as a visual reference. On 3 January 1886 in Altar, Sonora, Luciana Parra signed an Informacion Matrimonial, a formal intent-to-marry document with witnesses, naming the parents of each party, their ages and residences. She was 18 years old, born in Alta California about 1868 but had been living in Altar for the past 15 years with her father Jose Parra and mother Juana Jurado. 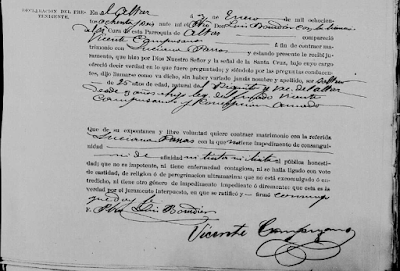 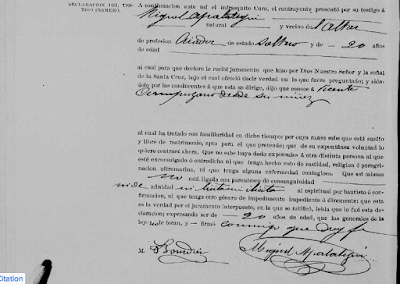 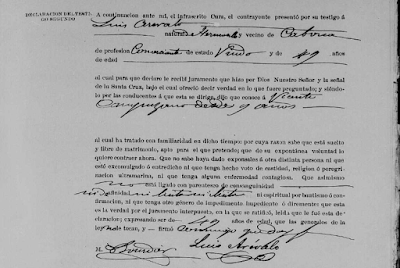 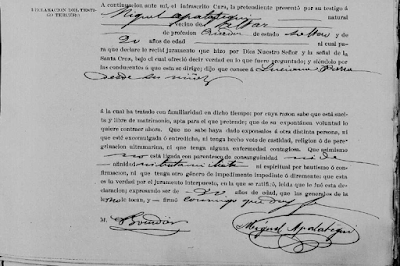 Luis Arevalo provided the same testimony in support of Luciana on the next page. As far as I can tell, the two do not appear later in the marriage records for Altar, so perhaps the wedding was called off. At this point, I do not know what happened to Luciana after January 1886. It is still fascinating to see this, and the document does include a clear copy of Vicente's signature along with some names of others who knew him at this stage of his life.

Update - 7 February 2016 - I've now found new documents on Ancestry referencing Luciana Parra and what happened to her after 1886. There will be a new post on this, see February 2016.
Posted by Patrick Jones at 8:16 PM