While going through the Decatur Herald on Newspapers.com, I ran across an obituary for the brother of my great-grandfather Harry O'Brien. John Henry O'Brien was the oldest son of my 2nd-great-grandparents, John O'Brien and Matilda Jane Lambert O'Brien. The obituary provides a great bit of detail on John Henry's life in Illinois. The article is dated 30 October 1944. 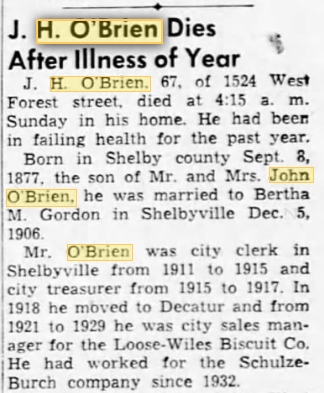 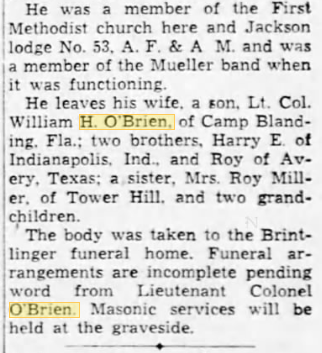 I knew that Harry was not the only O'Brien in the family with musical talent, since his brother Roy O'Brien had also played in Bohumir Kryl's band. But until finding this article, I did not know that John Henry O'Brien had played music in a band. The obituary notes that John played in the Mueller band. It looks like this band was active in the Shelbyville and Decatur, Illinois area in the 1900s-1910s.

Posted by Patrick Jones at 1:58 PM