My 2ndgreat-grandfather was John J. O'Brien (son of John O'Brien, who I have already posted about on this blog). He was born in LaSalle County, Illinois in July 1854. According to his obituary, the family moved to Shelby County, Illinois when he was seven years old, about 1861. 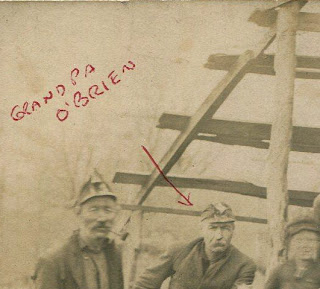 [Photo source, Mike O'Brien, from larger picture of Shelbyville area coal mine in 1903]

John married Matilda Jane Lambert in Shelbyville, Shelby County, Illinois on 6 April 1876, and they had the following children:

The O'Briens appear in the 1880 US Census in Rose Township, Shelby County, Illinois. John's occupation is listed as working in a coal mine. According to a page on Shelby County coal mining history, John O'Brien operated the O'Brien Coal Mine.

My Dad's cousin, Mike O'Brien, has provided me with a copy of this great photo from 1903 showing John O'Brien as foreman of a group of coal miners in Shelbyville, Illinois: 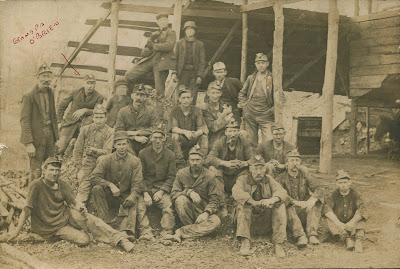 The Annual Coal Report of Illinois from 1911 shows John's mine produced 128 tons of lump coal (pretty small compared to some of the other mines in the county).

John died in Shelby County on 25 Aug 1927, after fighting illness for over a year.

Posted by Patrick Jones at 5:59 AM