Earlier in the week I wrote about John J. O'Brien, coal miner in Shelby County, Illinois. John met Matilda Jane Lambert in Shelby County, and they were married on 6 April 1876 (John was 22, Matilda was 19). Matilda had moved to the county from Adams Township, Parke County, Indiana, where she was born on 19 November 1857 to parents Henry Donham Lee Lambert and Sarah Brown.

In the 1860 US Census, Matilda appears as 4 years old, with her older sister Emeline (6) and younger sister Alice (1), and they're in Piattsville, Adams Township. Her father Henry was a physician in this census. I'll have more on Henry in a future post.

By 1870, the Lamberts had moved from Parke County, Indiana to Rose Township, Shelby County, Illinois. Henry was now a farmer, with Sarah keeping house. Youngest brother William Leander Lambert was born in Indiana in 1863, so the family moved to Illinois some time between 1864-1870.

Below is an assumption of the route they may have taken from Parke County to Shelby County via Google Maps, although it may have been a wagon ride straight across from Rockville: 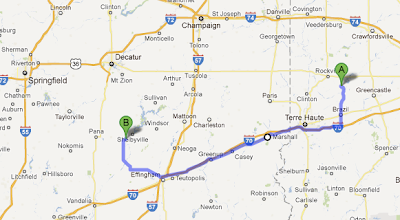 In 1880, Matilda appears as Jane O'Brien. She's keeping the house and the family has John Henry O'Brien (3) and Alva O'Brien (3 months).

The 1900 US Census shows quite a bit more information. By then, Matilda and John had been married 24 years. They had 7 children (6 still living, as Alva no longer appears in this census). The census lists both of Matilda's parents as born in Pennsylvania.

This record is also interesting because it shows all of the O'Brien children either working or in school. Son Henry worked in a restaurant. Daughter Annie worked as a millinor, and my great-grandfather Harry O'Brien is shown working as a clerk in a restaurant (probably the same restaurant as brother Henry).

In the 1910 Census, she appears as Jennie M O'Brien, age 53. She could also read and write. Her children in the household were all working in various professions - tailor, law office, musician.

By 1920, she and John were empty nesters (and she was listed as Matilda in the census). In the 1930 Census, she was 73 years old & living in the household with her daughter Rose O'Brien Miller and husband.

Matilda Jane Lambert O'Brien died on 31 May 1933 in Tower Hill, Shelby County, Illinois. She was buried on 2 June 1933 in Glenwood Cemetery.

Posted by Patrick Jones at 5:07 PM