The musical gene on my Dad's side of the family must have been passed down from my great-grandfather, Harry Edward O'Brien. Harry was the son of John J. O'Brien and Matilda Jane Lambert, who I have previously featured in the blog, and grandson of John O'Brien from Ireland. He was born on 16 November 1884 in Shelbyville, Shelby County, Illinois, and died on 7 August 1957. The following is an extract from a longer section on Harry O'Brien in my currently unpublished O'Brien Family History volume.
Harry was a clarinetist who traveled with band leaders Neil Innes, John C. Weber, Bohumir Kryl, and John Philip Sousa about 100 years ago. He played in orchestras, and in theatres such as the Murat in Indianapolis.

The photo above shows him endorsing the Boehm system clarinet. Harry later patented a crystal reed mouthpiece and invented his own clarinet key and primer, and manufactured crystal mouthpieces from his shop on 75th Street in Indianapolis, Indiana. For a time he was the only one in the world making crystal mouthpieces for musical instruments. Two clarinets with O'Brien inscribed mouthpieces are in the National Music Museum at the University of South Dakota (NMM 4850 and NMM 14182). The collection of historic musical instruments donated by Sir Nicholas Shackleton to the University of Edinburgh in Scotland contains a small clarinet labeled "O'Brien, Indianapolis, 1929-1950".

Sometime between 1910-1911, Harry left Shelby County, Illinois for Indianapolis. He married Blanche Lamon in Indianapolis on 18 February 1912. According to his World War I draft card signed 12 September 1917, Harry and Blanche resided in Broad Ripple, Indianapolis, Indiana. He was tall, medium build, with brown hair and brown eyes.
In the 1920 US Census, Harry & Blanche appear in Washington Township, Marion County, Indiana. He is shown as a manufacturer of musical goods. He ran an advertisement in the July 1937 issue of Popular Mechanics (page 134), image via Google Books. The following text was found on Clarinet Perfection:


O'Brien originally made the Selmer Clarion crystal mouthpieces.  Identified by only a couple of flutes (indentations on the side of the mouthpiece).
The O'Brien mouthpieces quality varied over the years.  In the early 1980s a cousin of the original O'Brien created mouthpieces from time to time.  These mpcs were not considered the "prime" mpcs
Earlier mpcs the glass could be slightly darker, even slightly pink.  On many of these models their would be a date etched on the glass.  The original mpcs from the early 1940s, made by the Harry O'Brien, were less clear and had more air bubbles.  So I guess the more "pure" the crystal in the mpc the less desireable they are.
There was also a mold change in the 1950s as the original mold was broken.  The older mold had 3 grooves on each side (6 total). The newer 1960's mold had 1 groove on each side.  The original Harry O'Brien (passed away in the 1950s) and he also manufactured clarinets. The son continued to make Selmer Primer clarinets in the 1940s as the father stopped.  Pete Fountain apparently used these clarinets along with the mouthpieces.
OCB stood for "Off Center Bore". These models were popular with jazz and classical clarinetists during the 1950s through the 1980s.  O'Brien is said to have put really good facings on his mouthpieces. In general it's thought that O'Brien has been underrated as an artists just because of his status as a manufacturer and retailer.  Tony Scott (pictured below) played a crystal mouthpiece during his jazz recordings years in the 1950s and 1960s.  The OB* was described as a "medium" and his most popular facing. 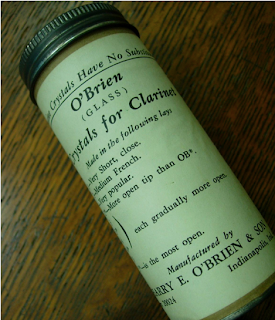 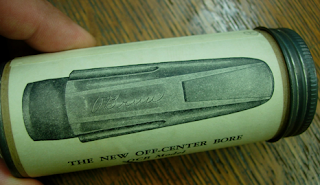 Vintage O'Brien mouthpieces from the early '50s & '40s are sought after and continue to be played by musicians worldwide.

I owe a huge bit of thanks to Mike O'Brien for sending me a collection of photos. These are a real treasure and I'll be posting some from time to time.

Harry had a fascinating life and I hope to learn more about his days as a musician. My Dad & my sister have continued the musical tradition, and my son shows a real interest in all things music at the age of 2.