This postcard was sent on 15 June 1938 to my great-grandparents Edgar and Alma Jones by my Gumpy, Keith D Jones. At the time, he was 17 years old and working as a lifeguard at Indiana Dunes State Park. The postcard was a great find, it shows the address for the Jones family at 133 West 20th Street, Apartment 12 in Indianapolis, after they had moved from Boone County (which I didn't have before finding the card at my parent's place back in April). 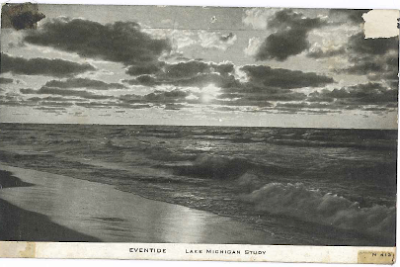 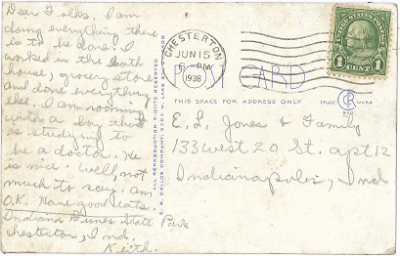 My Dad has provided me with the original postcard. It is pretty cool that this small note sent almost 74 years ago was still around.

Indiana Dunes is about a 3 hour drive, depending on traffic, from Indianapolis. I don't know how long the trip would have been in 1938. Pictures and information about the park can be found at http://www.indianadunes.com/ and http://www.nps.gov/indu/planyourvisit/maps.htm.
Posted by Patrick Jones at 1:30 PM