The Man with the Mexico Flag Tattoo

In Sunday's post on my great-grandparents and their purchase of a home in Tucson, Arizona from Ruby Hidalgo, I speculated that Plutarco Campuzano may have been connected to Carlos Calles, husband of Mary Flynn Calles, Ruby Hidalgo's sister. And it turns out I was right, they were cousins. Carlos was Carlos Gomez Calles, son of Arnulfo Ramon Calles and Soledad Gomez. Arnulfo was a son of Juan Bautista Calles and Maria Antonia Campuzano. Maria Antonia was a daughter of Vicente Antonio Campuzano (my 3rd-great-grandfather), Plutarco's grandfather.
The news clipping above tipped me off to the family connection between Carlos Calles and Plutarco Campuzano. The article notes Carlos' father (Arnulfo) was one of the first sheriffs of Tucson. I have not yet been able to verify this, but if true, that's pretty cool.

According to his immigration papers, Carlos Gomez Calles came to the US in 1890, when he was 3 years old. He was born on 25 May 1887 in Hermosillo, Sonora, although he listed 1888 on his declaration of intention. The document also noted he had a tattoo of the Mexico National Flag below the elbow on his right arm. 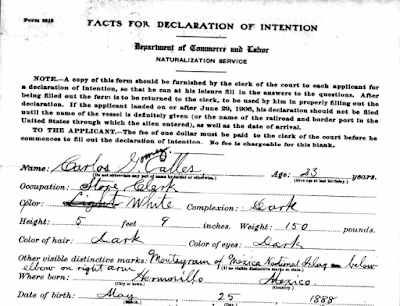 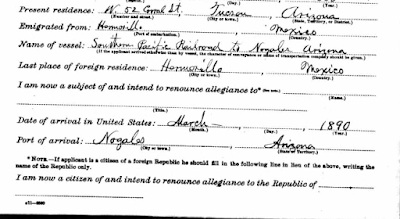 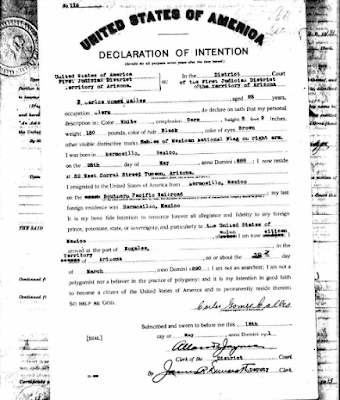 Mary Flynn and Carlos Gomez Calles were married on 16 October 1913 in Tucson, Pima County, Arizona.
When war broke out in Mexico about 1916, Carlos Gomez Calles joined the Mexican Army. He became a Captain, and was stationed at San Luis, on the border near Yuma, Arizona. There's much more to his story, and I will have that in a following post.
Posted by Patrick Jones at 6:30 AM No comments:


Posted by Patrick Jones at 6:11 AM No comments:

The first of June marks another Immigrant Heritage Month. Last year I wrote about the Journey of my Granny's side of the tree, from a small Sonoran town in the Mexican desert to Arizona, and now with descendants spread across the US. Last week, the Arizona Historical Society recently found a reference to my great-grandparents in their holdings. Plutarco Campuzano and Manuela Portillo came to the US on foot, by separate paths in 1915 and 1922, seeking opportunity in the US. They were married on 1 December 1923. After a lot of hard work, in 1949 they were able to buy a home located at 453 South Main Street in Tucson, Arizona from Alejandro and Ruby Hidalgo.
Ruby Flynn Hidalgo was a pioneer member of the Arizona Historical Society, so I was in luck the Society inherited her papers, and the mortgage with Plutarco and Manuela was in her files preserved by the Society. 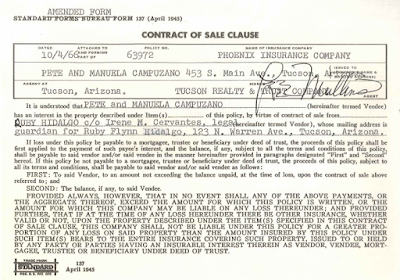 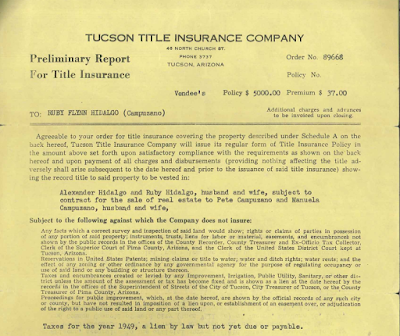 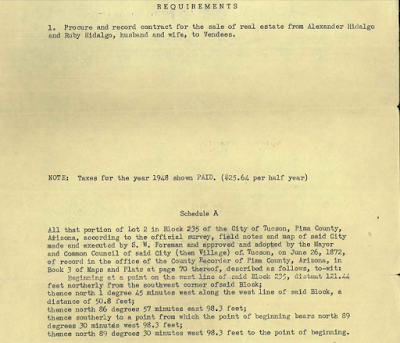 Buying a home was no small feat. Plutarco was a painter, and worked on construction projects in the Tucson area during the 1940s. They also had 9 children to care for. I think it was very impressive they were able to save and buy a home, as resident aliens.

There was another connection to Ruby Hidalgo, which might have played a role in connecting my great-grandparents to her. She was the daughter of Howard Andrew Flynn and Nellie Hayes, "well known pioneers" in Tucson. Ruby's sister, Mary Flynn, married Carlos Elias Calles, a nephew of Mexican President Plutarco Elias Calles. I wrote about the Campuzano family connection to Plutarco Elias Calles back in February 2016 (see my post Family Connections). Perhaps this family link brought my great-grandparents together with the Hidalgos to purchase their home.

Ruby's first husband was Julian A. Montano. I don't know yet if there was a connection between Julian and Cleotilde Lopez de Montano, but Cleotilde worked at the Tucson Steam Laundry, the first place Manuela Portillo worked when she arrived in Tucson in 1922. Maybe this link introduced Ruby to Manuela.

Or maybe it was something else, and these family links had no connection at all to bring my great-grandparents together with the Hidalgos. In any case, their home purchase was quite an achievement. The home still stands today, although it is now a law office. I am glad to learn my great-grandparents were able to purchase a home, and I take time to remember this for the start of Immigrant Heritage Month this week.

Posted by Patrick Jones at 8:20 PM No comments:

The time sure flies by fast. Happy Birthday weekend to our little guy, who isn't so little any more.
Last year's birthday weekend post is available here.
Posted by Patrick Jones at 8:05 AM 1 comment:

On Thursday I wrote about my 5th-great-grandfather Thomas Armstrong. His wife, my 5th-great-grandmother, Margaret Patton Armstrong, was born about 1783 in Pennsylvania. After the death of Thomas in 1856, Margaret continued to live in Perry Township, Hocking County, Ohio. She appears in the 1860 US Census, living next to the family of her daughter Nancy Ann Armstrong and husband Daniel Defenbaugh.

Margaret died on 5 May 1866. Her estate was settled in Hocking County probate court. William Armstrong served as administrator of the estate.
My 4th-great-grandfather John Armstrong received his distribution from the estate on 27 February 1867. He signed the document, indicating that he returned to Hocking County, Ohio from Indiana for the settlement of the estate.
After Margaret's death, William Armstrong purchased several tracts of land in Hocking County. I am awaiting copies of land deeds from the Hocking County Recorder's Office. I believe William was consolidating the holdings that had previously belonged to Thomas Armstrong. Before I can follow the family back to Pennsylvania, I need to wait on these documents.
Posted by Patrick Jones at 9:32 AM No comments:

During my recent trip to Amsterdam, I had an opportunity to go on a 10 mile run through the streets and around canals. I also managed to spot some interesting street art during the run. The photo above showing a stencil of Bob Marley is by noted artist Christian Guemy.

The photo above shows the impermanence of street art. This large mural was painted by a Dutch collective of artists in late 2014. According to previous photos online, in 2014-2015 there was a grassy lot next to the mural. Now the mural is about to be hidden by a new building on Amsteldijk street.


Posted by Patrick Jones at 8:50 AM No comments:

Thomas appears in the 1830 US Census in Perry Township, Fairfield County, Ohio. Jonathan Martin, another 5th-great-grandfather, appears at the bottom of this page, living quite close to the Armstrong family. John Armstrong married Jonathan's daughter, Sarah Sally Martin, in 1833.
In the 1840 US Census, Thomas Armstrong was still living in Perry Township, Fairfield County, Ohio. Jonathan Martin and family were also still close by. Thomas' son William Armstrong, shown on this census entry, later served as the administrator of Thomas and Margaret Armstrong's estates.
By the 1850 US Census, Thomas' household had grown smaller. Only son George was still living with his parents in this census record, although other children were close by.
When Thomas died in 1856, it appears the family was living in Adelphi, a small town on the border of Ross County and Hocking County. According to the Hocking County Recorder's Office, Thomas Armstrong had land holdings in Hocking County. I am currently awaiting copies of several entries for Thomas, William and John Armstrong. Thomas Armstrong's estate was submitted to the probate court in Hocking County.

Thomas' estate was appraised on 22 March 1856. The contents of the estate are interesting, showing various farm supplies, animals and crops. Margaret Patton Armstrong bought several items from the estate using her own funds, including a gray mare, buggy and harness, a bureau, eight-day clock, and other household items.
Margaret received the bulk of the estate, and the surviving children and heirs received a share in the amount of $175.38. John Armstrong had taken a loan from Thomas, most likely to move west to Indiana, so he only received $66.88 as his share.
My next post on the Armstrong family will look at the estate of Margaret Patton Armstrong. I am currently waiting on land records for the Armstrongs and will post more information on those entries after they arrive.

Posted by Patrick Jones at 10:25 AM No comments:

Flags at the UN

This was my view while at the United Nations Conference Centre in Bangkok back in April. Bangkok was a wonderful, vibrant city and I hope to go back there at some point again in the future.
Posted by Patrick Jones at 5:37 AM No comments:

Fold3 has updated its collections, adding World War II draft cards for the State of Arizona. Naturally I had to check for my Campuzano relatives. I found my great-grandfather Plutarco Campuzano's draft card, showing the family living at 196 1/2 West Simpson Street in Tucson in February 1942.
The card shows Plutarco working for Murphy-Keith Company in Catalina Foothills, Tucson, Arizona. I did some research, and this would have been John W. Murphey's Murphey-Keith Company, which developed the Catalina Foothills in the 1930s. The area is now one of the most affluent communities in Arizona. The Arizona Historical Society has a collection from John Murphey's files, and I have sent a note to the society to see if Plutarco appears in this collection.

There were a few other Campuzano entries in the draft cards, sons of Plutarco's uncle Ygnacio Campuzano and sons of his cousin Gregorio Portillo Campuzano.
Posted by Patrick Jones at 5:00 PM No comments:

After the first Belarus Internet Governance Forum, the organizers arranged a tour of nearby Dudutki, a living museum of folk crafts and Belarusian culture. The museum has a small farm, with workshops, a metal forge, beekeeping, cheese factory, distillery, Orthodox Church, and more. It is located about 40 kilometers outside Minsk, in the rolling countryside of the Pukhovichi district.
I found Belarus to be very green, and in many ways the land was quite similar to other places in Western Europe or Midwestern US. The people were friendly and the food was good. Our hosts were wonderful. This excursion provided a glimpse into the life of rural people in Belarus, dating back centuries in the region.
Posted by Patrick Jones at 9:35 AM No comments:

The Girl in the Embroidered Shirt


On my last evening in Minsk, last Wednesday 18 May, I walked 3 kilometers across town, through the main train station to a residential block. I had read about a large mural painted in November 2015 by artist Guido van Helten as part of the Urban Myths project. The mural is huge, 9 stories high, and shows a young woman in a traditional Belarusian style shirt. It's really an amazing painting, and I am glad I saw this as the sun was setting, illuminating the building and the mural. I believe the painting is titled "The Girl in the Embroidered Shirt."

The photo above shows some of the scale of the mural. The detail is striking. You look at her face, wonder what she's thinking, and want to know her story.
Of course, van Helten's paintings are also based on real people, so the woman depicted in the mural is probably a model. From Guido van Helten's Tumblr stream, one can see a photo of the inspiration for the Girl in the Embroidered Shirt. I am looking forward to stumbling across other works by van Helten in the future.
Posted by Patrick Jones at 8:54 AM No comments:

Posted by Patrick Jones at 4:21 PM No comments: