My great-grandfather Plutarco Vasquez Campuzano (also called "Pete"), was born on 18 April 1900 in Altar, Sonora, Mexico. Plutarco was the son of Vicente Plutarco Campuzano and Maria Jesus Vasquez. He was a painter - initially of houses, later art work and figurines.

I previously posted about Plutarco and Manuela's 1929 visit to Nogales, their Barrio Viejo neighborhood in Tucson, and the family in the 1930 and 1940 US Census.

Plutarco first came to the US in 1910 with his father Vicente Campuzano. He obtained permanent resident status on 10 January 1929. We're very fortunate to have these records, as they help fill in the gap between his arrival in Arizona and the years between the 1930 & 1940 US Census.

A copy of Plutarco's resident alien border crossing identification card from 14 October 1945 is below: 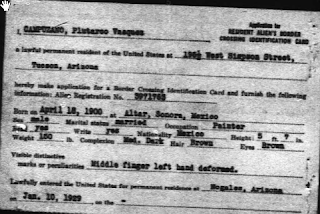 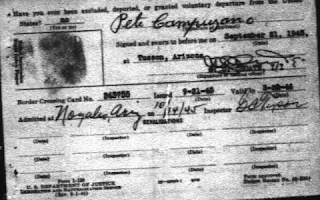 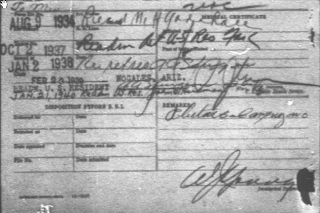 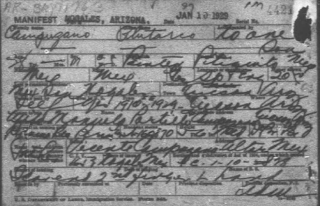 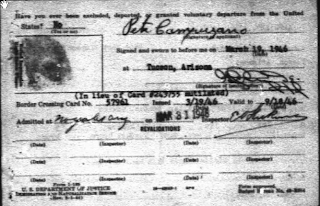 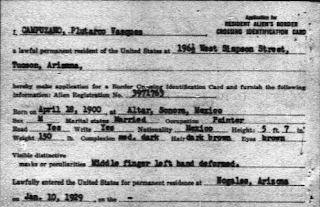 Plutarco and Manuela regularly appear in the Tucson City Directory. A page from 1936 shows them at 1321 E. 11th Avenue in Tucson. 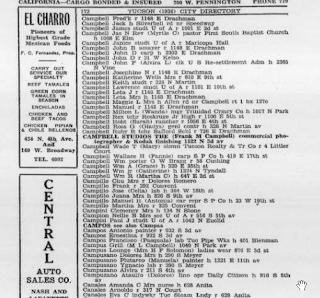 This picture is of me and my sister with Plutarco from about 1983 (such a bad picture of me, but the only one I have of me & my sis with him).
Plutarco Vasquez Campuzano died on 7 September 1996 in Tucson, Arizona, at the age of 96 years old.
Posted by Patrick Jones at 9:05 AM