When my Granny's family settled in Tucson, Arizona in the early 1920s from Mexico, they moved to the Barrio Viejo neighborhood, south of downtown Tucson. Barrio Viejo contains many Sonoran-style adobe homes dating back to the 1870s. Part of the neighborhood was demolished in 1970 to make space for the Tucson Convention Center. The remaining area is the oldest example of this architecture in Tucson, and the original Mexican-American neighborhood for those who made their way to Tucson to begin a new life in the US.

From looking at the birth certificates of my Granny and her siblings and the 1940 US Census, I have been able to pinpoint the various houses in which the Campuzano family lived (thank you Google Maps & Streetview, see below). 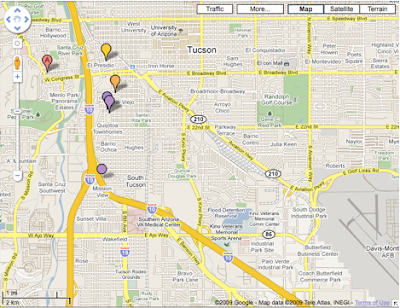 The late Lalo Guerrero's song "Barrio Viejo" is about the neighborhood.

Many of the homes have murals, for more see photos and at TucsonMurals. The University of Arizona Library published a book on the neighborhood called Barrio Historico Tucson (1971), which looks at the neighborhood from an architectural & historic perspective. Figure 2.27 from the book shows a drawing of the front of the Campuzano house as representative of the architecture for Barrio Viejo:

I visited my great-grandfather in Tucson with my family in the mid-1980s. Over the years I've had a real comfort level when walking through old neighborhoods in various Latin American cities, such as in Mexico City, San Juan, Puerto Rico, Cartagena, Colombia and San Jose, Costa Rica. Perhaps this is something passed down.
Posted by Patrick Jones at 12:33 AM