On Friday I wrote about Agnes Lydia Allman Oyler. I have also previously posted a photo of Agnes' husband, my 2nd-great-grandfather, Charles John Oyler. Charles was born on 9 December 1856 in Harrison, Butler County, Ohio, the son of Samuel Oyler and Mary Ann Hise (or Haise). He died on 1 January 1921 in Thorntown, Boone County, Indiana. 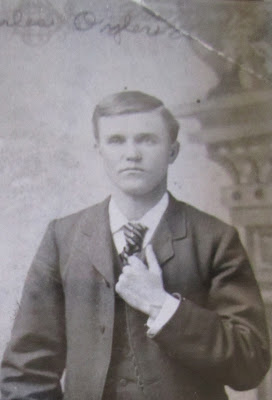 I have so far been unable to find Charles in the 1860 US Census, but I know from the work of distant cousin Hilary Jarvis, that Charles moved from Ohio into the household of aunt Elizabeth Oyler Wright and uncle Charles Wright in Tippecanoe County, Indiana at the age of 7 in 1863.

Charles appears in the 1870 US Census in the household of his aunt & uncle in Clarkshill, Lauramie Township, Tippecanoe County, Indiana.

Charles Wright had been a butcher in England. He immigrated to the US with Elizabeth Oyler in 1839. Wright taught Charles Oyler the butcher's trade, and Charles also helped on their farm.

Interestingly, Charles' mother Mary Ann Hise Oyler appears in the household of Charles' grandfather George Oyler in the 1870 US Census in Harrison Township, Hamilton County, Ohio. I'll have more on the mysterious Mary Ann in a future post.

In the 1880 US Census, Charles is still in the household of Elizabeth Oyler Wright in Clarkshill, Indiana.

I have already noted the marriage of Charles and Agnes Lydia Allman on 24 May 1882 in earlier posts, along with copies of the 1900 and 1910 US Census entries showing Charles, Agnes & family in Boone County, Indiana.

After Agnes passed away in 1916, Charles appears in the 1920 US Census in Sugar Creek Township, Boone County, Indiana. He's living next door to Albert Vail (a cousin of Easter Vail Armstrong) and his wife Minnie C. Daniel Vail (daughter of William Gilbert Daniel and Sarah Melissa Jones).

Robert P. Jones passed down the following notes to me from Joe Oyler about Charles John Oyler:

In honor of Charles John Oyler’s birthday – December 9, 1856-1921
One of the greatest heritages any person can have is Godly parents who live a Christian life so nobly and well that their children, and all who really knew them, rise up and call them blessed. Such were our wonderful parents who were most loyal to their church and community their entire lives. They made a place for themselves by practising the Christian precepts, in being good neighbors and citizens in every and all situations. They lived under what we now call restricted conditions, mostly in the “horse-and-buggy-days”, with no telephone for even half their married lives and no electricity in the home. So their range of contacts, though quite limited, were very deep and meaningful and all who knew them sensed their genuine goodness and soundness and learned to love and respect them.
Through regular Bible reading, family prayers, grace at meals, and regular attendance at Sunday School and church, and liberality in all works of charity, they have made alasting impression upon their children which has been a perpetual benediction to each.
Dad and I were very close, partly due to our working together on the farm. He often shared his deepest convictions while we cut wood, hauled hay or grain or husked corn together beside the same wagon. One time when Bill Adams, a good neighbor farmer, was helping Dad and me move hay from one farm to another, they were sharing their mutual Christian faith and Dad said, “Well I have no doubts, I can and do believe in the goodness and mercies of God.”
All through my student days at Purdue, Dad let me know his deep concern for material and spiritual well-being. This was expressed when at home on some week-ends and in a number of fine, warm letters.
(Page 2)
During my first year of teaching in Reelsville, one time when home while Dad was in very poor health, in fact bed-fast most of the time, he voiced his deep interest in my future by saying, among other things, “You will marry and have a home of your own, won’t you”?
Our Dad was one of the very finest men I have ever known. His superb loyalty to his family was unmatched. Had it been our privilege to have lived near uncle Ben Oyler, I feel we could list him close second.
I deeply regret that we know so little of his early boyhood and young manhood while growing up in Clarkshill, Ind. In the home of his uncle Charlie Wright. Kodaks from those days would mean so much. His picture at age 21 is a treasure to us.
Prepared by Joe B. Oyler, December 9, 1965 at Tipton, Indiana

A Partial Biography of Charles John Oyler, Dec. 9, 1856-Jan. 1, 1921, prepared by his son Joe B. Oyler, in January, 1970.
Our father was born in Harrison, Ohio. His parents were Samuel Oyler and Mary Haise. Children were: Samuel Oyler, Jr., Benjamin F. Oyler, Charles John Oyler, Ellen (Schiffer) Oyler, Sophia (Gale) Oyler, and Fannie (Lux) Oyler. Both parents died early and left the six children to be raised in rather widely separated families.; the girls in Catholic homes and the boys in Protestant homes.
Samuel Jr. prospected as a young man near York, Montana and died there as a young man. Burial site is unknown.
Ben Oyler was raised in the home of a Mr. Marsh near Okeana, Ohio about 35 miles from Cincinnati. He married Emma Clawson and they had twins, only one of whom survived. Lee Marsh Oyler lived to manhood. Ben was a farmer. Ellen, after her marriage, lived in Portsmouth, Ohio. Sophia married John Gale and lived near Galesburg in southern Illinois. Fannie married Joe Lux and lived in Covington, Kentucky.
Our mother, dad, Alma and Murrell visited aunt Fannie and family in August, 1906. Aunt Fannie visited us at Thorntown on the Jacobs farm in August, 1911 or 1912 when we had a lot of ripe peaches.
Our father was raised in the home of an uncle Charlie Wright of Clarkshill, Indiana taken by them at the age of seven. He helped the Wright’s on the farm and went to school only about four months a year until age fourteen. He was taught the butcher’s trade.
As a young man he learned to know a young Methodist minister whom he promised to have marry him. Sometime in late 1881 father met Agnes Allman of Fairmount, Illinois who was visiting relatives in Clarkshill. After a courtship of about six months they were married in her farm home two miles north of town on her eighteenth birthday, May 24, 1882. Father’s minister friend, William H. Broomfield, performed the ceremony.
(Page 2)
They farmed near the northwestern town limits of Clarkshill and in about 1890 bought a 70 acre farm at the northeast edge of town. Sometime in 1891 father contracted typhoid fever and was very ill and unable to work for six months. Sister Mabel was born Oct. 8, 1886.
Being in heavily in debt, the long illness set him back, causing him to give up this farm. In September, 1892 they bought a 32 acre farm one and one-half miles northwest of Thorntown and one-half mile northeast of Sugar Plain and moved there. During the period 1892 to 1903 five other children were born: Joe, Emily, Alma, Marley Wree and Murrell. In August, 1903 scarlet fever struck and Marley Wree died at the age of three. Alma, 6 years old, never went to bed because of the fever.
All through their married life our parents were very close friends with George and Tollie Northrup of Clarkshill. They visited back and forth 2 or 3 times a year. While living in the Sugar Plain School and Quaker church vicinity the folks became very close friends of the James Riley family. After Mr. Riley’s death about 1901, his widow Ella remained a very close friend as well as her stepson Marley and his wife Maude.
With the long siege of scarlet fever (the family was under quarantine for 6 weeks) and big doctor bills dad decided to sell the home place and try renting so he could earn some more land. On March 1, 1904 the family moved to the Wm. A Pearson farm of 160 acres four miles northeast of Thorntown. The old friends around Sugar Plain remained faithful and among the new neighbors were the Joe Underwoods, the J. Everette Folks and the John Reeves families.
In March 1908 the folks had a farm sale and moved into Thorntown where dad took an interest in a hardware business. This venture didn’t
(Page 3)
prove very remunerative so in Oct. 1909 we moved back to the Mrs. Jacob 175 acre farm 3 miles northeast of town. We lived there until March 1, 1913 when we moved to Mrs. Eva Wild’s 252 acre farm one and one-half miles due west of Thorntown and less than a mile from the original old home place. It was on the Wild’s farm, operated 5 years, that dad did some of his best farming. He grew 50 to 75 acres of wheat each year and one year produced an average of 35 bushels per acre, which was very good at that time.
In 1918 dad left the Wild’s farm and moved into Montgomery County to the John Flanigan farm of 350 acres, 60 acres of which was in timber. During the summer of 1918 Dad’s health began to break and after harvesting the corn crop he rented a smaller place, the Clint Miller farm of 140 acres 4 miles southwest of Thorntown. His health continued to fail so that by the farming season of 1920 he could do little work. Since I was teaching, Murrell, just 17, took over and with the good help and advice of sister Mabel made the farm go. During Christmas week of 1920 uncle Ben Oyler made us a visit and bid dad goodby while a patient in the Withem Hospital at Lebanon on the evening of December 31 just before taking the train for home. During the early morning of January 1, 1921 our father passed away. Mother died Nov. 9, 1916 while we lived on the Wild’s farm. It was a terrible loss to dad and the family as we had always been very devoted and close. Dad’s physical force began to dwindle from that time on.
Father was held in very high esteem by all who knew him and several fine eulogies were expressed at the time of his passing. His was a life well lived. Jesus said of the poor widow who threw her mite into the treasury, “She has done what she could.” I think these words would apply to our father.
--

Charles John Oyler was born at Harrison, Butler county, Ohio December 9, 1856 and departed this life January 1, 1921 after a prolonged illness of a complication of diseases.

His parents died while he was young, after which time he was raised in the home of an uncle, Charles Wright of Clarkshill, Indiana, where he spent his boyhood and early manhood.

On May 24, 1882 he was united in marriage to Agnes Allman of Fairmount, Illinois. To this union was born six children as follows: Mabel, Joe, Mrs. Walter Couger, Mrs.Edgar Jones, Samuel Murrell*, and Marley Wree, deceased.

The wife and mother preceded him in death November 9, 1916. In 1892 Mr. and Mrs. Oyler moved from Clarkshill to Thorntown where the family has resided ever since. Mr. Oyler joined the Methodist church in early youth and continued a faithful member throughout his life.

He is survived by one brother, B.F. Oyler, of Okeana, Ohio, and two sisters, Mrs. Joseph (Frances) Lux, of Covington, Ky., and Mrs. Ellen Schiffer, of Portsmouth, Ohio, besides members of the family.  One of the best citizens of the community has been called from us. Seldom have been heard such high words of praise concerning a man as have been spoken of Mr. Oyler by his neighbors and friends.  The funeral services were held at the Methodist church Monday morning at 10:30 o'clock, conducted by the pastor, Rev.C.C. Harold. Interment was made in Maple Lawn Cemetery. --