My third-great-grandmother was Easter Vail Armstrong, mother of Sarah Ellen Armstrong Jones, and wife of David Armstrong. Easter was born in Montgomery County, Indiana on 31 December 1840 to parents James Vail and Selina Hampton.

In the 1850 US Census, Easter appears in the household of James & Selina in Franklin Township, Montgomery County, Indiana. The census taker wrote her name as "Esther" but it was in fact Easter. 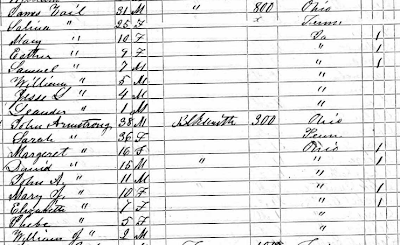 Easter's future husband, David Armstrong, appears living next door in the home of his parents John and Sarah Armstrong. Both attended school, most likely together.

Below is a Google map showing Franklin Township in Montgomery County. 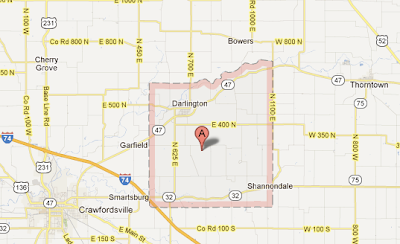 Easter and David were married in Montgomery County on 27 February 1860. In the 1860 US Census, the young couple were living next door to David's parents in Franklin Township, Montgomery County, Indiana.

By the 1870 Census, David and Easter had moved to neighboring Jefferson Township in Boone County. David was a blacksmith and later a tile manufacturer.

Easter lost her husband David to a tragic accident in 1887. According to the story passed down by Robert Jones, "David Armstrong, father of Sarah Ellen Armstrong Jones (Keith's and my grandmother), died of blood poisoning. In those days they pulled threshing machines with horses from one farm to another. However they had a steam engine to run it once it was set in place. While pulling the threshing machine (separator) the horses got frightened and ran off. He tried to jump off but his leg caught in the lines and he was pulled under and it broke his leg. They had to amputate his leg and to do it they laid him on the kitchen table and cut it off. They had put a tournaquet on it but the Old Doctor (Dr. Rose) didn't know 'enuf' to remove it later. He got gangrene and died as a result."

In the 1900 US Census, Easter is shown as head-of-household, with daughter Sarah Ellen and son-in-law Thomas Robert Jones living in the house with their children and Frank Daniel.

In the 1910 US Census, Easter was still living in the house with Thomas Robert Jones and daughter Sarah Ellen Armstrong. The census states that she had her "own income".

The last census in which Easter appears is the 1920 US Census. She was still in the household with Thomas Robert Jones and Sarah Ellen Armstrong, but appears at the top of the page as 'head-of-household'.