This is a portion the map from Jefferson Township in Boone County, Indiana in 1878. The original is part of Ancestry's US Indexed County Land Ownership Maps, 1860-1918 (original microfilmed by the Library of Congress in Washington, DC).

My 3rd-great-grandfather David Armstrong owned land in the upper left corner of the map, on the border of Jefferson Township. He also owned the tile factory across the street from his land. In the 1880 US Census, David Armstrong employed a number of the neighboring men in the tile factory, including O.S. Booher (age 20), James Jones (age 25), William Daniels (age 15), and James McDuffie (age 34). 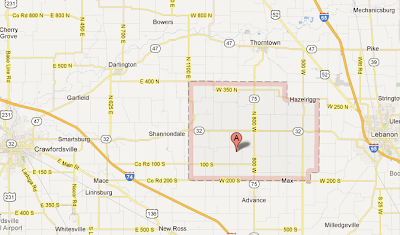 Here is a modern view of Jefferson Township via Google Maps (ignore the placement of the A pin on the map, this pinpoints Jefferson Township only). By my comparison of the Google map to the 1878 map, David Armstrong's land should be at the intersection of W 400 N and N 1050 W. I switched to Satellite view, and the property matches up. It also looks like there is a house on the property that may have been David Armstrong's. For now, the land is still used for farming. Maybe I can get back to Wabash in the near future and stop by the old Armstrong homestead.

I will have more on David, and his wife Easter Vail, in a subsequent post.
Posted by Patrick Jones at 5:32 AM