This one is for my fellow distant Jones cousins, Lynne & Pat. I previously posted about Sarah Melissa Jones Daniel, so I will not repeat all of that information here. As noted previously, her husband was William Gilbert Daniel.
William was born on 6 November 1841 to parents James H. Daniel and Eliza Jane Hull. Lynne and Pat have provided me a copy of story of William Daniel from notes collected by Dennis Mahoney in 1999. William served as a Sergeant in Company F of the 61st Mounted Tennessee Infantry with Sarah's older brother Joseph Thomas Jones (correction - Joseph did not serve in the 61st Mounted Tennessee Infantry, he served in the Union Army). After the Civil War, William & Sarah followed Joseph Jones and Martin Jones, along with their families, to Boone County, Indiana.

William Daniel was captured at the Battle of Big Black River on 17 May 1863. He was held as a prisoner of war, and sent to Fort Delaware. William was in the prisoner transfer to Point Lookout, Maryland on 20 September 1863. According to William's prisoner of war record, he was transferred as part of a prisoner exchange on 17 January 1865, and arrived at Camp Lee (near Richmond, Virginia) by 26 January 1865. 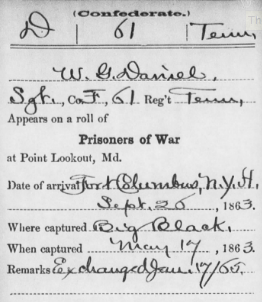 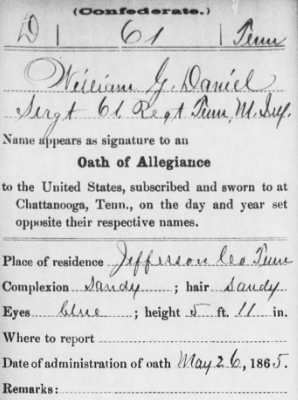 William signed an Oath of Allegiance to the United States on 26 May 1865 in Jefferson County, Tennessee. The oath notes that he was 5 ft, 11 inches, with blue eyes, sandy complexion and sandy hair (see photo above via Fold3.com).