Like many Tennessee families, the Jones family of Jefferson County dealt with divided loyalties among the Union and Confederacy during the Civil War. In January I wrote about Corporal Francis Marion Jones, who enlisted in the 9th Tennessee Calvary on the Union side. Last month, I also covered his commanding officer, Captain John Thornhill, nephew of Elizabeth Thornhill Jones. While Francis and John Thornhill joined the Union side, Francis' brothers Martin V. Jones and Joseph Thomas Jones (my 3rd-great-grandfather) enlisted on the Confederate side.

One thing I find fascinating was that when Joseph Thomas Jones joined the 61st Infantry, he had 4 young children at home (his youngest son, Marion Columbus Jones had been born in April 1862). He had grown up hearing about his father and older brother's deaths in the Mexican War, and saw his mother's struggle to receive a widow's pension. Joseph's older sisters Catherine, Margaret Caroline, Emeline, Adaline and younger sister Mary had all gotten married before the Civil War. Joseph would have been the oldest son in the family at this time.

Prisoner of War
According to his muster roll, Joseph was captured at the Battle of Big Black River on 17 May 1863 (see http://www.nps.gov/hps/abpp/battles/ms010.htm and http://www.nps.gov/vick/historyculture/bigblack.htm). A detailed account has been written by Rebecca Blackwell Drake and is worth a read at http://battleofchampionhill.org/history/big-black.htm. Joseph was sent to Memphis with other prisoners of war on 25 May 1863, and then transferred to Fort Delaware, Delaware on 15 June 1863. 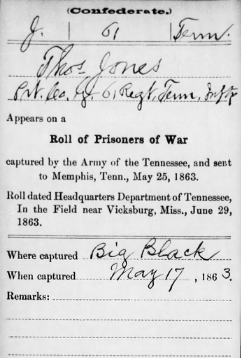 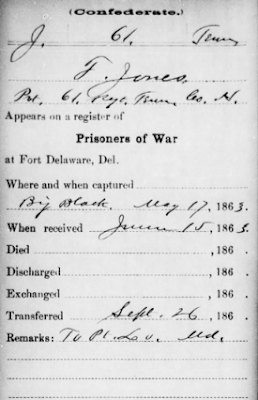 On 20 September 1863, Joseph was sent from Fort Delaware to Point Lookout, Maryland. This has been referenced as the largest and worst northern prisoner of war camp (see http://www.censusdiggins.com/prison_ptlookout.html). The map below shows Point Lookout's location at the point where the Potomac River empties into the Chesapeake Bay. 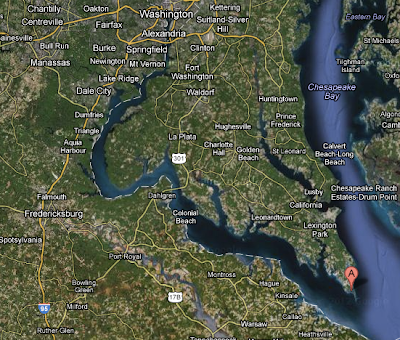 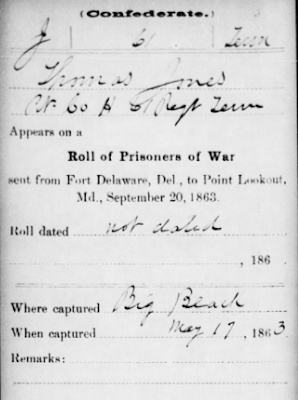 At some point, Joseph was paroled at Point Lookout and released as part of a prisoner exchange on 10 February 1864. 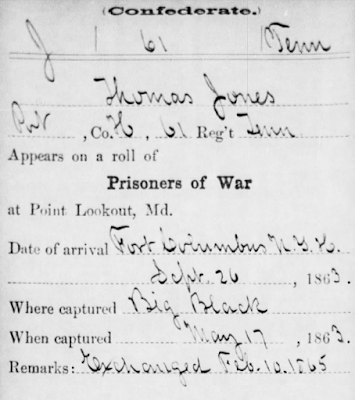 Another interesting bit of history is that on 4 February 1864, one week before Joseph was paroled in the prisoner exchange, Abraham Lincoln wrote to the US Senate on correspondence between Union and Confederate authorities on the exchange of prisoners (see the Collected Works of Abraham Lincoln, Volume 7): 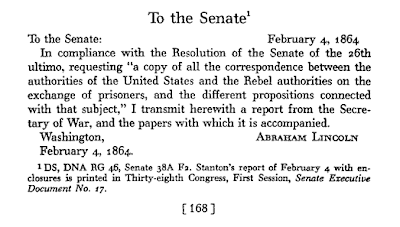 Joseph returned to Jefferson County, Tennessee to his wife Mary Katherine Green Jones and their four children. He must have returned home by mid to late February or March 1864, because Mary gave birth to their fifth child, Nancy Cornelia Jones, in November 1864, approximately 9 months after Joseph returned home from war.

Joseph's brother Martin Van Buren Jones (named after the 8th President of the United States, who served between 1837-1841) was also captured outside of Vicksburg, Mississippi around 17 May 1863. He filed a Confederate Pension application, and his wife filed a widow's pension application after Martin died. I'll have more on Martin and his pension in a later post. Martin received his pension, and died on 2 February 1918 in Erath County, Texas.

--
Joseph Thomas Jones' service information and images from the Compiled Service Records of Confederate Soldiers Who Served in Organizations from the State of Tennessee, National Archives Publication Number M268, via Fold3.com.