The youngest child of Robert Thomas Jones Sr and Elizabeth Thornhill was Sarah Melissa Jones. She was born on 11 August 1846 in Jefferson County, Tennessee. My distant cousin & fellow Jones family researcher Lynne King has provided the photo of Sarah Melissa below: 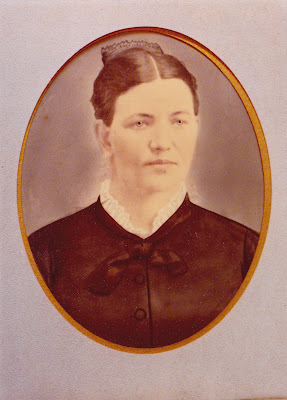 Sarah Melissa married William Gilbert Daniel on 23 October 1862, just before William joined the Confederate Army with Sarah Melissa's brothers Martin and Joseph. A copy of their marriage record from the Tennessee State Marriages 1780-2002 is below:

In the 1870 US Census, Sarah Melissa and William were in Talbotts Station, Jefferson County. Elizabeth Thornhill Jones was living with them.

By 1880, the Daniels had moved to Boone County, Indiana with the families of Sarah Melissa's brothers, Joseph and Martin Jones.

Sarah Melissa Jones Daniel died on 2 July 1888, before her 42nd birthday. She is buried in Walnut Grove Cemetery in Thorntown, Boone County, Indiana.

I'll have more on William Daniel and his service in the Civil War in a separate post.
Posted by Patrick Jones at 9:15 PM