More on the Whitleys

This is a continuation from my previous post on the children of Thomas Whitley and Elizabeth Hayden Matthews. As with yesterday's post, I know there may be many grandchildren and descendants of this family, so if you stumble onto this post I would be happy to share information.

Omer Dural Whitley
The next in line is Omer Dural Whitley. He was born on 24 July 1895 in Elk Springs, Warren County, Kentucky. He appears in the Whitley household in the 1900, 1910 and 1920 US Census. On his World War I draft card, Omer was working as a farm hand for his father in Smith Grove, Kentucky.

Omer later moved to Indianapolis, and worked at the restaurant called Turner's Lunch operated by my great-grandmother Lois and her second husband Ed Turner. On Omer's World War II draft card he listed Ed Turner as his employer, and was living above the restaurant at 1341 Kentucky Avenue (the same location as in the photos I posted back in 2015).
Omer married Mary Childers on 23 December 1930 in Indianapolis. She died a few months later in Barren County, Kentucky.

Omer passed away on 18 March 1951 in Indianapolis. Grandma Lois was the informant on his death certificate.

Elizabeth Lois Whitley
My great-grandmother Elizabeth Lois Whitley was the 8th of 12 children, and I have covered her previously here. She left Kentucky at the age of 17 and married my 2nd-great-grandfather Alvin Read in Indianapolis on 8 February 1919. They lived in the home of her sister Minnie Whitley and Minnie's husband Oran Sheeks in the 1920 US Census and he worked as a meat cutter. Lois and Alvin separated sometime before 1930, although they appear in the 1929 City Directory in Indianapolis. She sent my grandfather Leo to live with her older sister Mattie Whitley Goff while she worked as a servant in her uncle Felix Matthew's boarding house and restaurant at 1341 Kentucky Avenue.

Lois must have divorced Alvin, but I'm not sure if this happened in Kentucky or Indiana. By 1935 she appears in the Indianapolis City Directory with her 2nd-husband Ed Turner. In the 1940 US Census, Lois and Ed had taken over management of the boarding house and restaurant at 1341 Kentucky Avenue. Ed Turner's son William was living with them, along with my grandfather Leo.

George C. Whitley
Lois' younger brother George remained in Kentucky but followed older brother William to Louisville. He married Ellenora Lewis, and they had at least two children, Gloria and Carole May Whitley. George entered the Navy in 1944. His obituary says he was a veteran of both world wars. George died on 14 March 1970.
Margaret Madge Whitley
Tenth in the line of Whitley children was Margaret Madge Whitley. She was in the Whitley household in Kentucky in the 1910 and 1920 US Census. By 1930 she was in Indianapolis, working as a telephone operator.

Madge married policeman Forrest Watson in Indianapolis in September 1931. Watson served in the Indianapolis Police Department for over twenty years, retiring in 1952.

Madge was featured in the Indianapolis Star as a switchboard operator during the Indiana State Fair in 1941. This photo really helps, as now I can compare this photo of Madge with the old photo album my Mom inherited from my Grandma Lois.

In the clipping above, the part about time zone confusion is particularly amusing, given Indiana's notorious issues with daylight saving time.

Madge regularly appears in news articles in the Indianapolis Star as active in Sigma Beta sorority. She also served as the President of the Charial Club, participated in bridge tournaments with the Indiana Bell Bridge Club.

According to her obituary, Madge worked at Indiana Bell Telephone Company for 33 years. She passed away at the age of 97 on 3 October 2004, the last of the Whitley siblings. 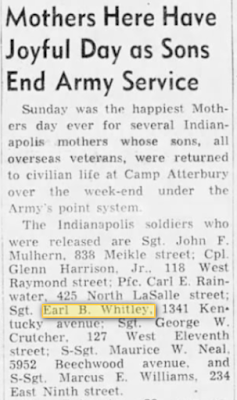 Earl moved to Texas. He was discharged from the Army in September 1954.

Earl passed away in San Antonio, Texas on 5 March 1979. He is buried at the Fort Sam Houston National Cemetery.

Nellie Ruth Whitley
The last of the Whitley siblings was Nellie Ruth Whitley. She was born 20 May 1912 and appears in the 1920 US Census in Barren County, Kentucky. Ruth married Lyle Markle on 3 April 1930 in Hendricks County, Indiana. She passed away a year later at the age of 18, in very sad circumstances.

Posted by Patrick Jones at 9:59 AM