A story worthy of a film

While looking for news articles on my great-grandmother's brother Grover Whitley, I stumbled onto articles mentioning Grover's son James Clifton Whitley and his service during World War II. James entered the Army in February 1942, training as an ordnance officer in Maryland and Montana. He was sent to Europe in 1943, and participated in bombing campaigns in Tunisia, Sicily and Italy. Prior to joining the Army, James was employed at the Allison Division of General Motors in Indianapolis, the same place where my Dad worked many years later.
James was promoted from Lieutenant to Captain in July 1944. His bombardment group completed over 300 missions in the Mediterranean.
In early 1944, Grover and Madge Whitley received a letter from James, reporting on an amazing coincidence. James had been wounded on 26 December 1943 while on a bombing run. His recollection from the British Eighth Army hospital in Italy was described in an article published in March 1944, with the headline "Local Flier Finds Man He Had Shot Down Shaving Him." 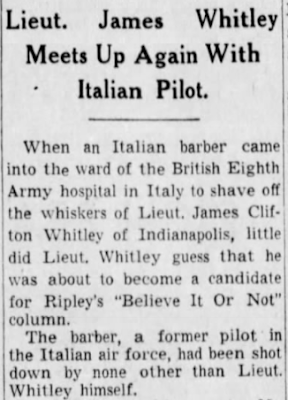 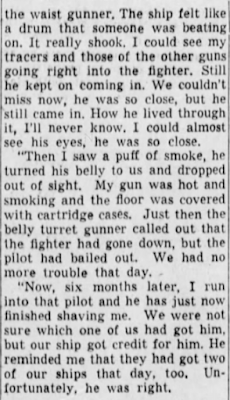 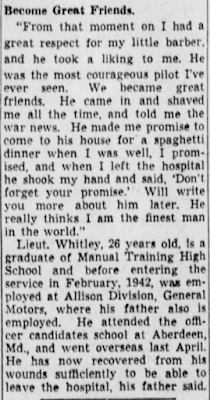 This story reads like a film, such a great bit of life to read about the Italian pilot turned barber meeting the soldier who shot him down, and that they became friends. The article provides a lot of interesting detail about James as well, including that he was an ordnance officer on a B-17 flying fortress bomber and could speak Italian well. The article also shows that Grover Whitley was employed at Allison, another interesting coincidence. A shorter version from the Indianapolis News is below.

Looking further, James was part of the 2nd Bombardment Group. A search of the group's database turned up 26 missions that James flew in Europe. As this doesn't include any of his flights in North Africa, so he likely flew many more. His duties ranged from observer, radio operator, waist gunner, tail gunner, and flying control officer. Targets included sites in Italy, Romania, France, Germany, Hungary, Greece, Czechoslovakia, Yugoslavia, Hungary, Austria. One of the missions, 252, is listed as "Landing Beach, France" on 15 August 1944. This was part of Operation Dragoon, on Southern France.

James retired as a Colonel from the Army. Incredible service for the country in extraordinary circumstances. Descendants of James will want to order a copy of his military file from the National Archives.
Posted by Patrick Jones at 6:55 AM