On the Names of the Drafted

A search through Newspapers.com identified a few entries mentioning Joseph Halter, my wife's 3rd-great-grandfather. In the week of 10 April 1865, a draft notice was published in the New Orleans Times-Picayune. Joseph Halter is listed once again at 258 Frenchman Street, as a "watchman, QMD". 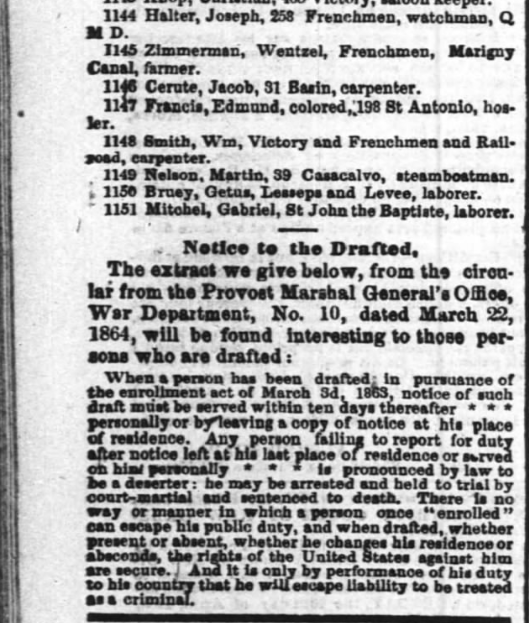 This gives a sense of how Joseph managed after the fall of New Orleans. QMD stands for the Quartermaster Department, which was in charge of managing supplies and shipments into and out of New Orleans for the Union. By this time he was about 24 years old.

A year later, Joseph appears in the 1866 City Directory for New Orleans. He's listed as a "syrup maker, 147 and 149 Elysian Fields." Looking closer at his service record from 1861, it looks like he was working at a syrup factory at the time. After digging into this address, this was the Orleans Manufactory owned by Spanish immigrant Raphael Tudury. 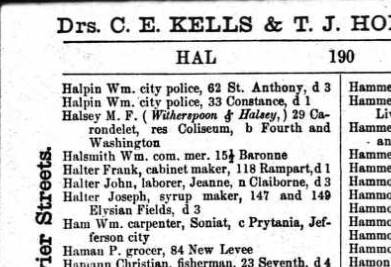 Sugar and cane syrup were major products out of New Orleans. A photo below titled "the sweetest spot on earth" shows barrels of sugar waiting to be shipped out of the city.

Joseph appears at the same address in the 1867 City Directory, but not in 1868. On 1 June 1867, Joseph and Laura welcomed a son, Andrew Jackson Halter. The census entries for Andrew show him as born in Indiana, so the couple must have returned to Evansville sometime in 1867.

By 1870, Joseph was back in New Orleans, working as teamster for Raphael Tudury's Orleans Syrup and Cordial factory. There is a second Joseph Halter (grocer), I think this may be an uncle. 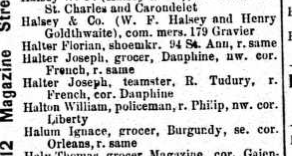 The 1871 City Directory also shows two Joseph Halters, the grocer, and our Joseph working back at 147 Elysian Fields (Raphael Tudury's factory). This the same employer as 1866. The residence on Bartholomew makes me think the second Joseph is an uncle, our Joseph's father Francois lived on Bartholomew in the 1861 City Directory, and John Halter listed below was his younger brother. 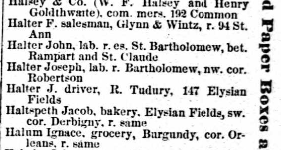