Up the Mississippi and back

Sometime after the end of July 1860, young Joseph Halter left his home in New Orleans and made his way on a riverboat up the Mississippi. He traveled to Evansville, Indiana, probably arriving prior to the Summer of 1861, although I am not certain of the timing. This was a tenuous time in the US, with tensions flaring between the North and the South.

Once in Evansville, Joseph met Laura Williams, a daughter of Harvey Williams and Sarah Beach (residents of neighboring Warrick County in 1840). The couple were married in Vanderburgh County on 11 August 1861. At the moment, it is not clear how long they remained in Evansville. Joseph was clearly back in New Orleans within a few months, as he appears in November 1861 as part of the Confederate Orleans Fire Guards. I am hoping there are some news articles from Evansville that shed some light on Joseph and Laura's time in the city.

Orleans Fire Regiment, Confederate Army
Perhaps as the Civil War intensified in 1861, Joseph felt the pull of home in New Orleans. On 23 November 1861 he appears in the service rolls for Company F, Orleans Fire Regiment. This was known as the Confidence Fire Guard. Joseph would have been 20 years old at the time. 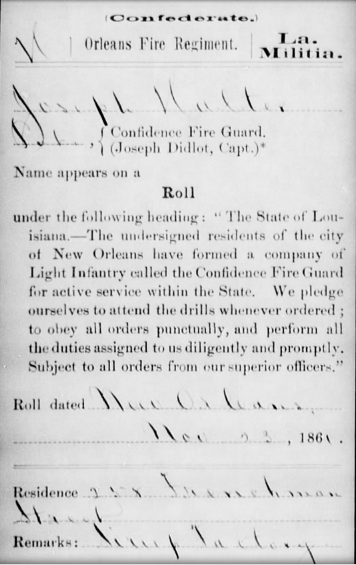 The service roll shows Joseph's address as 258 Frenchman Street, the same address from the 1861 City Directory. 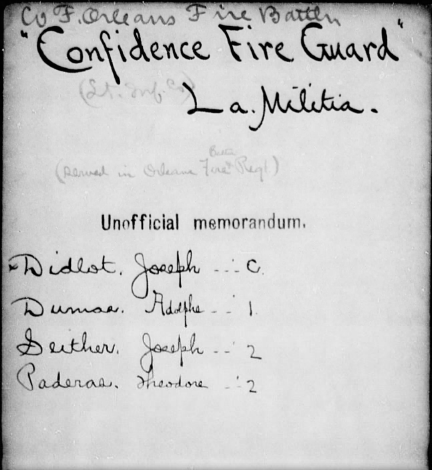 New Orleans was captured in April 1862. Joseph was likely in the city when it fell to Union forces. It is possible his wife Laura was there as well.
There's more to follow in the story of Joseph and Laura, which I'll have in the next post.
Posted by Patrick Jones at 7:33 PM