Words from nearly 1200 years ago

Last Friday while wandering around the Pike Place Market in Seattle, I spotted a small gold cherry blossom branch with Japanese characters embedded into the sidewalk on the corner of Pike and First Street. I snapped a photo and continued walking. Later this week I looked at the photo again, reading the words "I have always known that at last I would take this road but yesterday I did not know it would be today - Narihira."
A Google search revealed this to be words written by Japanese poet Ariwara no Narihira, who lived from 825-880.
Posted by Patrick Jones at 10:49 AM No comments:

Another series of street art photos from my visit to Istanbul earlier in the month. This joins the earlier posts from 19 April and 13 April.


Posted by Patrick Jones at 3:23 PM No comments:

Short Clippings on the O'Briens

Here are two more short bits of information which provide more insight into the family connections in my O'Brien line.

First is another news clipping on Rose O'Brien which appeared in the Decatur Herald on 24 February 1912. This clipping mentions that she was returning from her older brother's wedding in Indianapolis. The wedding was for my great-grandparents, Harry Edward O'Brien and Blanche Lamon.

The ceremony occurred on 18 February 1912 in Indianapolis, Indiana.

The second bit of information is on Anna Alice O'Brien, Harry's older sister, and their Aunt Anna Maria O'Brien. They appear in the 1905 Wisconsin State Census, in Whitewater, Walworth County, Wisconsin, working as milliners. This answers the question I had previously on the timing of their partnership in Wisconsin.

Posted by Patrick Jones at 9:24 AM No comments:

Next to the Blue Mosque at Arasta Bazaar in Istanbul is the Great Palace Mosaic Museum. It costs 10 Turkish Lira to enter (equivalent to $3.70), which is a small price to pay in order to see mosaics from the Byzantine period.

In the first image below, I am struck by how similar this image is to the eagle and snake symbol from the Mexican flag, which is taken from Aztec iconography. Similar images, developed in isolation from each other. I took a Mesoamerican Art course and minored in Classics in college, so seeing this reminded me of those years. I also visited Italy at the age of 11, which spurred my interest in world cultures and travel.

Posted by Patrick Jones at 6:48 AM No comments:

Hagia Sophia and its famous resident

For this post I have more photos from my walk through the Hagia Sophia in the middle of the month. I am very glad that I was able to see this historic place. During my visit I also ran into Gli, the Hagia Sophia cat.

Posted by Patrick Jones at 2:57 PM No comments:

Peace is in the hands


Posted by Patrick Jones at 7:31 AM No comments:

Working for the Firm

As seen in a previous post, Rosa O'Brien (sometimes also spelled as Rose) a younger sister of my great-grandfather Harry Edward O'Brien, had trained as a stenographer in 1909. By November 1913, Rosa appears in the Decatur Herald, working for the law firm of Whitaker, Ward and Pugh. The firm had relocated to prime office space in Shelbyville, Illinois. The article provides a glimpse of life working in a law firm over a hundred years ago. 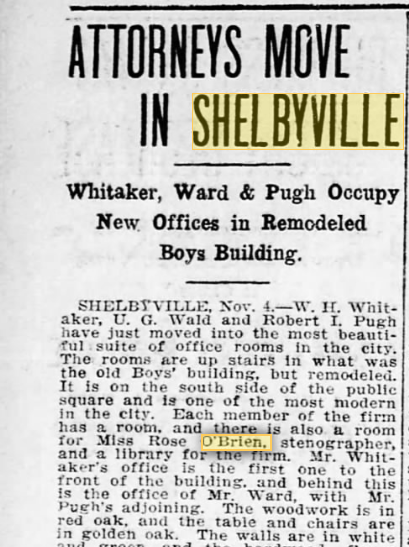 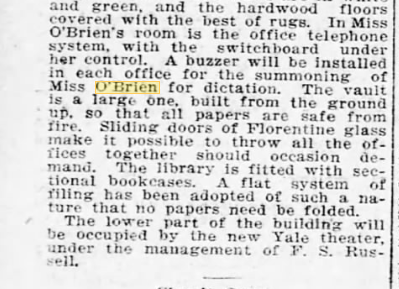 Rose likely used this law office training while serving as the executrix of her Aunt Anna Maria O'Brien's estate in February 1914. She was only 27 when she took on this responsibility.

Posted by Patrick Jones at 7:34 PM No comments:

This series of street art photos was taken while walking through the narrow streets of Istanbul's Karaköy neighborhood. The area is currently described as one of Istanbul's hippest spots. I found some great little restaurants, a wine bar (Pan Karaköy) and lots of trendy coffee shops. There's cool street art in the area too, and it is a short walk to the Galata Bridge.
The mural above is a copy of advertisement created by artist Otto Exinger for Julius Meinl coffee. This is on the side of the Karabatak Karaköy restaurant.

Posted by Patrick Jones at 4:31 PM No comments:

While looking through the Shelbyville, Illinois area newspapers for references to my great-grandfather Harry Edward O'Brien, I often ran across short blurbs on his older sister, Anna Alice O'Brien. She was born two years before Harry, in Shelby County, Illinois on 27 July 1882. Unlike her three brothers John, Harry and Roy, it does not look Anna pursued music. But it is clear that she was a talented and creative woman. Anna studied millnery, traveled throughout the Midwest to some of the regional designers, and later bought a building and opened her own store.

In the 1900 US Census, Anna appears in the household of her parents in Shelbyville, Illinois, working as a millner. According to clippings from the Decatur Herald, in 1908 she was working as a trimmer in the shop of Ms. Ida Miller. Clearly they were friends, as this clipping from 1 November 1908 shows (see below). 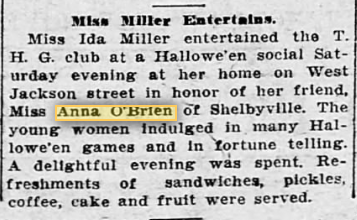 It looks like Ida Miller's store was in Sullivan, Illinois. Another clipping from 15 November 1908 shows that Anna had wrapped up her work at the store for the season and was returning to Shelbyville to visit family.

One article from the Decatur Herald on 27 February 1909 shows Anna traveling with her younger sister Rosa:

In 1910, Anna went to Chicago to attend the latest millnery openings. It appears that Anna had also spent two years working with her Aunt Anna Maria O'Brien in Whitewater, Wisconsin but I am not certain on when this fits in her timeline. Anna returned to Shelbyville in 1912 and bought her own building for $600, which is quite an accomplishment. She opened a millnery store in September 1912. It is interesting to see how she put her own talents and career first. 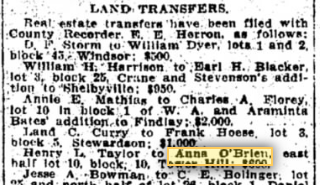 Anna married Charles Carlton Stretch on 25 December 1912. The wedding occurred on Christmas morning in Tower Hill, Shelby County, Illinois:
Anna and her sister Rosa went to Chicago in August 1913 to visit their Aunt Anna Maria O'Brien, who was recovering from surgery.

In 1914, Anna appears in the news clippings, traveling to St. Louis and Chicago for millnery supplies and to attend showings. In February 1914, her Aunt Anna Maria O'Bried died in Chicago. This clipping shows that Anna worked with her Aunt in Wisconsin.

May 1914 brought spring weather to Illinois and outdoor improvements on the building that Anna had purchased in 1912 for her business.

After battling blood poisoning from a scratch on her neck, Anna died at the age of 33 on 17 October 1915.
After expanding my news search to look for articles on her husband, Charles Stretch, I found the funeral notice for Anna. She was highly regarded in the community. 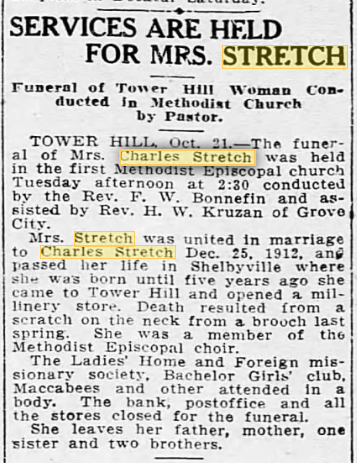 Posted by Patrick Jones at 8:31 AM No comments:

During the week in the Istanbul office, I was very lucky to have been able to see the old Sultanahmet quarter of the city on a sunny day. One of the things I found surprising is the huge number of blooming flowers throughout the city. Here is a sampling of photos, showing tulips arranged in a pattern in front of the Hagia Sophia. This UNESCO World Heritage site is nearly 1500 years old. Hagia Sophia has been a Greek Orthodox Church, a Roman Catholic cathedral, an Imperial mosque, and is now a museum.
The next photo shows the famous Sultan Ahmed Mosque, also known as the Blue Mosque. I'll have many more photos from the interior, but this one captures the flowers blooming in the gardens between the Blue Mosque and the Hagia Sophia. This is a beautiful place.

Posted by Patrick Jones at 10:40 PM No comments:

Scenes from the morning run

Often in my travels, the only time I get a chance to see a city is to go on a morning run. So this morning I ran from my hotel to the famous Galata Bridge and back. The total was over 8 miles. The last mile and a half is a ridiculous incline, so some of this run became a brisk walk. But it was a great way to start the day, allowing me to see Istanbul as it was waking up.

Posted by Patrick Jones at 4:34 PM No comments: