Another in the web of family

Another supporter of Thomas W. Thornhill in his application for a pension from service in the 1st Tennessee Cavalry during the Civil War was Benjamin Hickey. He provided an affidavit on 29 October 1890, testifying that he had known Thomas for 30 years and that he was aware of Thomas' disability following the War. Benjamin's affidavit was also witnessed by Thomas' sister, Margaret Emily Thornhill Bowers and her husband William A. Bowers. 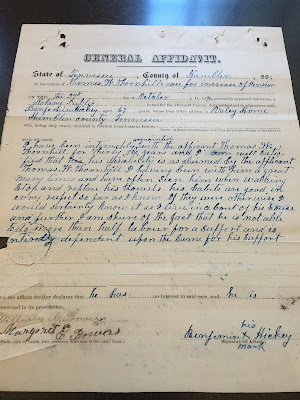 Benjamin Hickey was born in February 1824, and like Thomas, he served in Company C, 1st Tennessee Cavalry during the Civil War. Benjamin also has a tangled connection to my family tree. He was a younger brother of Sarah Sally Hickey (my 4th-great-grandmother), mother of Mary Catherine Green (my 3rd-great-grandmother and first wife of Joseph Thomas Jones). Benjamin's second wife was Louise Paralee Thornhill, a daughter of Alexander C. Thornhill and Minerva B. Preston. Alexander C. was a son of Joseph Thornhill and Sarah Westall, my 5th-great-grandparents.

Benjamin has a long file in his Civil War service record, and I am interested to go back to the National Archives to view his pension file in the hopes that there may be affidavits from others in the Jones and Thornhill families. A copy of his discharge papers from Fold3.com is below:

Posted by Patrick Jones at 7:16 AM