Will of Benjamin Ballard Sr

At the end of February I posted an inventory of the estate of Benjamin Ballard, my 6th-great-grandfather. After checking the Library of Virginia's Chancery case files for Spotsylvania County, I found a scanned copy of Benjamin's will in a case filed by James Leavell and wife against James Ballard, executor of Benjamin's estate. 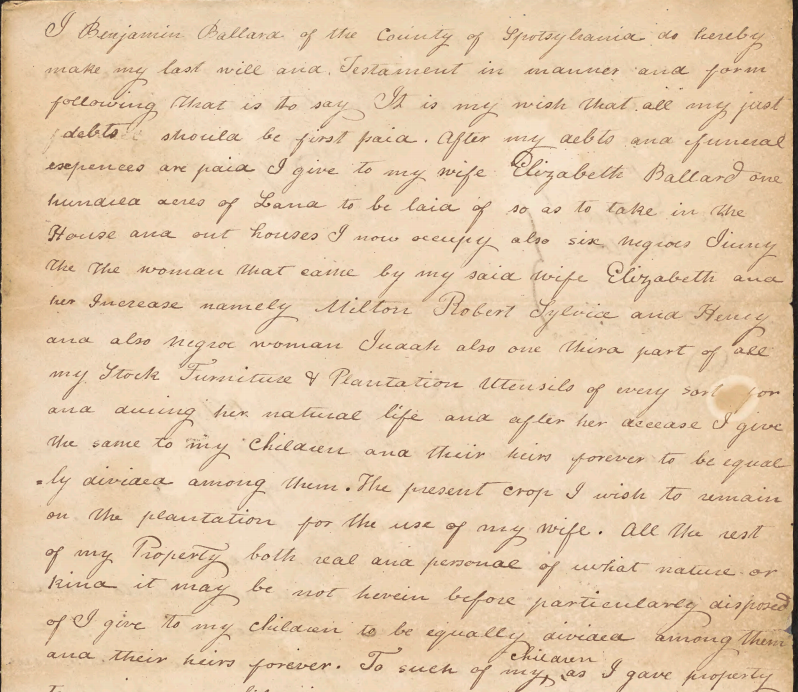 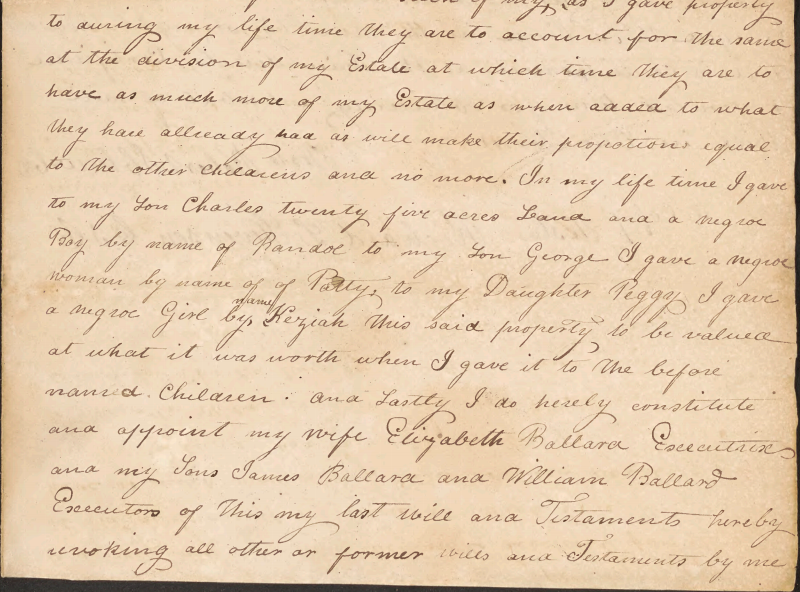 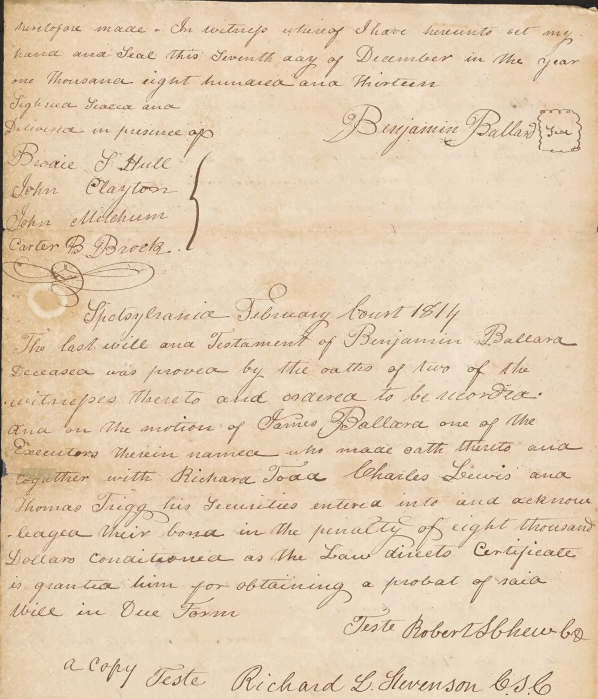 Right away this document is visibly different from the transcription of the will in the Spotsylvania County Court Will Book. The words are the same, some are more legible in this copy than in the Will Book version, but this version takes two pages, where the Will Book version fills all of page 387 in Book H. The will names his children Charles (who was given 25 acres during Benjamin's life), George, Peggy, James and William. Benjamin Sr. named his second wife Elizabeth as executrix with sons James and William as Executors.

It is interesting to see several of Benjamin's known children not listed in the will, including my 5th-great-grandfather Benjamin Ballard Jr, but the Leavell case notes that the land in the estate was divided into 8 parts. The first document in the file describes the suit by the Leavells. Other heirs of Benjamin Sr are named here, including Benjamin Jr, James Ballard, Charles Lewis & wife (Mary Jane Ballard, daughter of Benjamin Sr), James, Lewis, Winslow Parker & Sally (Sarah Ballard) his wife, Betsy and Mary Ballard, daughters of William Ballard, and children of George Ballard (deceased), Beverley, Benjamin, Thomas, Lucy Ballard, and Mary Trigg Ballard (George's wife). It appears that Charles Ballard transferred his interest in the land to the Leavells. They asked for a survey of the 25 acres gifted to Charles and a survey of the remaining land of Benjamin Ballard.

The next document (page 3 in the scanned set), more clearly lists the persons in the action. James Leavell and Nancy, his wife, Jesse Wayt and Peggy (Ballard, daughter of Benjamin Sr), James B. Lewis and John Montague, children of Hannah Herring deceased (Hannah Ballard, daughter of Benjamin Sr), Charles Lewis and Mary his wife (Mary Jane Ballard), Benjamin Ballard (Jr), James, Lewis and Winslow Parker and Sally his wife (Ballard), Betsy and Mary, adult heirs of William Ballard (son of Benjamin Sr), Beverley, Thomas, Benjamin, Lucy and Mary, adult heirs of George Ballard deceased (son of Benjamin Sr). The eight heirs of Benjamin Ballard Sr are listed as Nancy, Peggy, Hannah, Mary, Benjamin, William, George and James. Benjamin Sr. left behind 304 acres, of which 25 of those acres had already been gifted to Charles Ballard. The Leavells were asking for a "fair division of the land" to the heirs.

James responded that Charles Ballard and Sally Estes (another daughter of Benjamin Sr) had been given promissory parts of property prior to the creation of Benjamin's will, and that those persons along with himself were entitled to the land. There is a handwritten note at the bottom of the page which appears to have been added later stating "see Plat Book 10 page 9 for plat". I'll have to check this next time I go to the Spotsylvania County Court.

It looks like the case was filed in 1827, dismissed in November 1841. From the file it is not clear how the case was resolved. I'll have to look at further documents in Spotsylvania County, including land records, in order to see if there was a resolution to the case. I am grateful that the case exists, as it preserves key information on the family and descendants of Benjamin Ballard.

There are more chancery cases involving the Ballard family in the Spotsylvania County records published by the Library of Virginia. I will have a few more posts from these cases, as they contain signatures of James Ballard and Benjamin Ballard Jr.