I am continuing the review of the Library of Virginia's scanned Chancery cases from Spotsylvania County, Virginia. Earlier I found the will of Benjamin Ballard Sr in the case file Leavell v Ballard. Benjamin's sons James and William Ballard were named as executors of the estate. William died around 1821, leaving James as the sole executor.

James had married Isabella Montague, a daughter of Clement and Hannah Montague. Clement made a will in 1791, which can be found in the Library of Virginia Chancery file index number 1841-082. The children named in Clement's will included Thomas Montague, Clement Montague Jr, Elizabeth Carpenter, Isabelle Ballard and Sarah Whiting. The estate was to be divided equally among all the children (except Isabella was "not to have not part no part negroes except the part left to my wife for reason that the said James Ballard has a bill of sale for a negro wench named Mima."). Next Clement left the children of his daughter Susanna Duerson deceased, wife of Joseph Duerson, an equal part of the estate, exclusive of what he had already devised. This was conditioned on Joseph not claiming an interest in a bond he had of Clement's for 25 pounds. If you're a descendant of the Montague family, one can find the will in the case file here.

The disposition of Clement Montague's estate became entangled with the Ballard family in the case James Ballard and wife, etc v Henry Duerson etc (index number 1831-001). On Clement Montague's death, he had a reversionary interest in 190 acres of land in Spotsylvania County held by a Mrs Collins in dower. Collins had moved to Kentucky several years earlier and it was believed that she had died. Seven years had passed since she had been heard from, and Clement had not disposed of his interest in the land during his lifetime. His daughters Isabella Montague Ballard and Elizabeth Montague Carpenter claimed 1/8 interest each, and said they could not obtain this without the aid of the court.

The claim also notes that Clement Montague left two grandsons in the county, Henry Duerson and Montague Duerson, the latter of whom was dead, but he had an infant son William Duerson. The claim asked that a court appoint a guardian ad litem for the infant. Clement's five other children were believed to have moved to Kentucky. Some of these children were already dead - Ann Estes, Thomas and Clement Jr. The portions held by Ann, Thomas and Clement Jr, along with Sarah Whiting (by now married to Abner Wilson) had been sold or assigned to a Thomas Wigglesworth, representing 4/8 of the interest. Wigglesworth had sold his interest to Benjamin Ballard Jr (my 5th-great-grandfather). There is a document showing Benjamin Ballard paid $37.39 to the children of Thomas Montague for their interest (see below), executed on 3 November 1828. 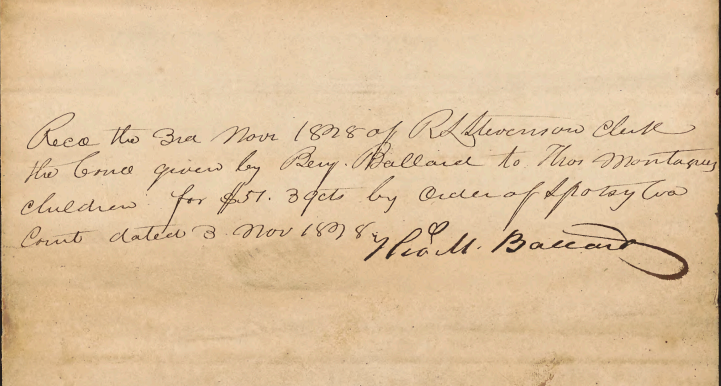 Henry Duerson responded, representing himself and serving as guardian ad litem for infant William Duerson (his nephew). I don't read this as a contentious suit. Henry's response makes it clear he admitted the matter as set forth in the complaint and agreed to abide by any decree the court thought was just and equitable. He also asked if he could be dispensed from his costs in responding to the case. Wigglesworth and Ballard also did not contest the case, as they both stood to benefit from the court's resolution of the issue. 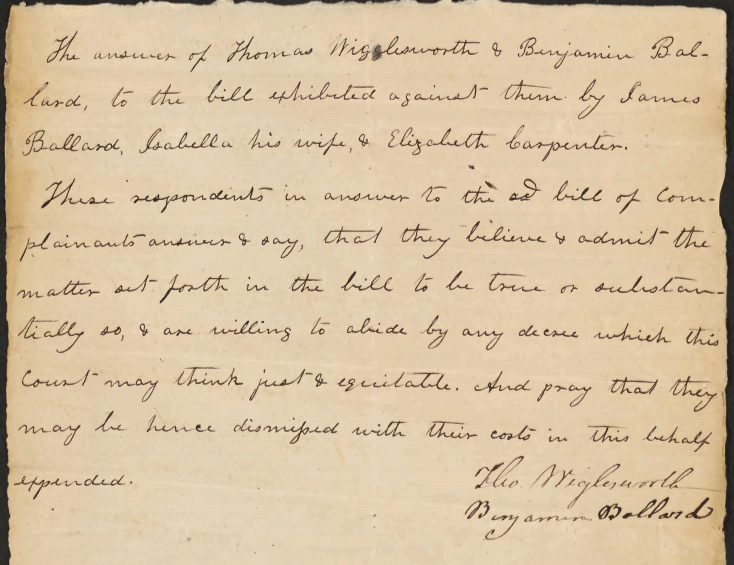 Charles L. Thomas appeared as an attorney for the children of Thomas and Charles Montague, and they also agreed that the land should be sold.

The court agreed and directed the land be sold and proceeds be divided into 8 parts: to James and Isabella Ballard, Elizabeth Montague Carpenter, to Henry Duerson for 1/16 interest and to Henry as guardian ad litem to William Duerson for another 1/16 interest, to Thomas Wigglesworth for 3/8 interest, and to Benjamin Ballard for 2/8 interest (from the purchase of interests from the children of Thomas and Charles Montague). The land went to public auction, and Benjamin Ballard bought the property for $427.50. Benjamin was able to get some money back since he had previously purchased the interest of Clement Montague's children (and had already paid for the interest of Thomas Montague). 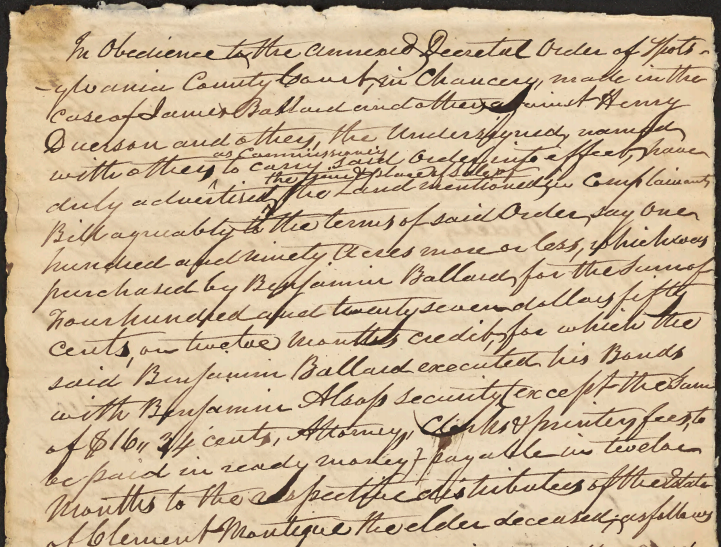 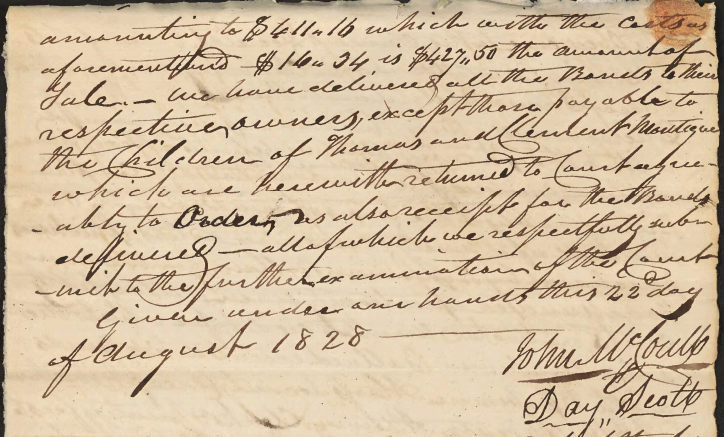 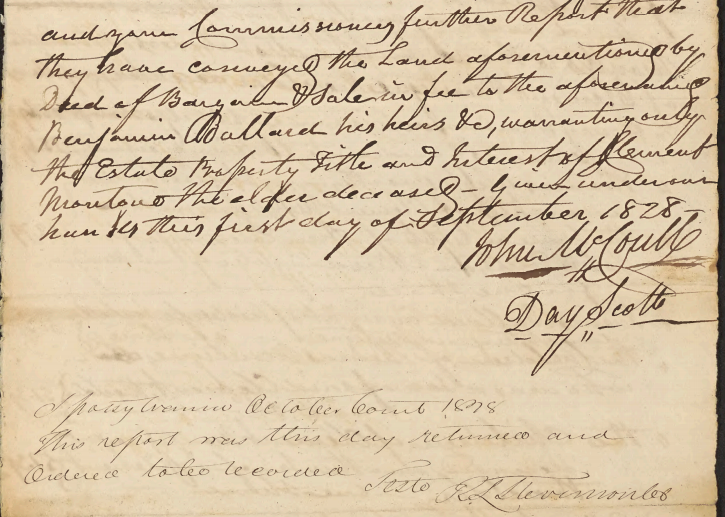 In June 1828, James Ballard had appointed Charles L. Thomas as attorney to represent the interests of the children of Thomas and Clement Montague. At some point in 1830, news of the case reached the heirs of Clement Montague in Kentucky, and they joined the action against Benjamin Ballard for their interest. Specifically, Sally Montague (wife of Clement Montague Jr), who had married Hardin Davis in Barren County, Kentucky in 1817 after the death of her husband, claimed that Hannah Montague, wife of Clement Sr, was entitled to a distribution from the estate. Hannah had remarried and moved to Kentucky with other Montague children. Hardin and Sally Davis submitted their response on 16 October 1830.

The documents in the case are a little out of order, as next in the set is a power of attorney signed by Samuel Endicott, Elizabeth Endicott, Thomas Montague and Thomas Hart, appointing Thomas Ballard as attorney to represent them. These four descendants of Clement Montague were in Harrison County, Kentucky. Their document was signed on 27 August 1825. It looks like Thomas Ballard attorney was the son of James Ballard.

It isn't entirely clear how the case was finally resolved. For that I will have to see the Spotsylvania County Court records in person.

This case (and the earlier case containing the copy of Clement Montague's will) provides invaluable information on the composition of the related Ballard and Montague families in Virginia and Kentucky. It is great to see the signature of my 5th-great-grandfather and to see how he may have acquired the 190 acres in Spotsylvania County.
Posted by Patrick Jones at 4:40 PM