Soldier of the 4th Regiment

Like his older brother John Booher, Jr, Isaac Booher served in Captain James Landen's Company, 4th Regiment Tennessee Volunteers during the War of 1812. While John Jr only served about a month (or 14 days according to the Pension Office), Isaac was in the Company from November 1814 to May 1815. While I have not yet pulled his service record file at the US National Archives, Isaac's War of 1812 pension application states that Captain Landen's Company was part of Colonel Bayless' regiment. This regiment marched from Tennessee, through Mississippi to Mobile, Alabama, where they protected the region from possible Indian raids and British invasion until the end of the war.

From reading other accounts of men who served in Captain Landen's Company, disease was rampant during the winter of 1814 in and around the forts protecting Mobile. The men provided a key line of defense in the last months of the war, between the signing of the Treaty of Ghent and the arrival of news of the end of the war in Louisiana and Alabama. I am interested to learn more about the service record for the company and their time defending Mobile. 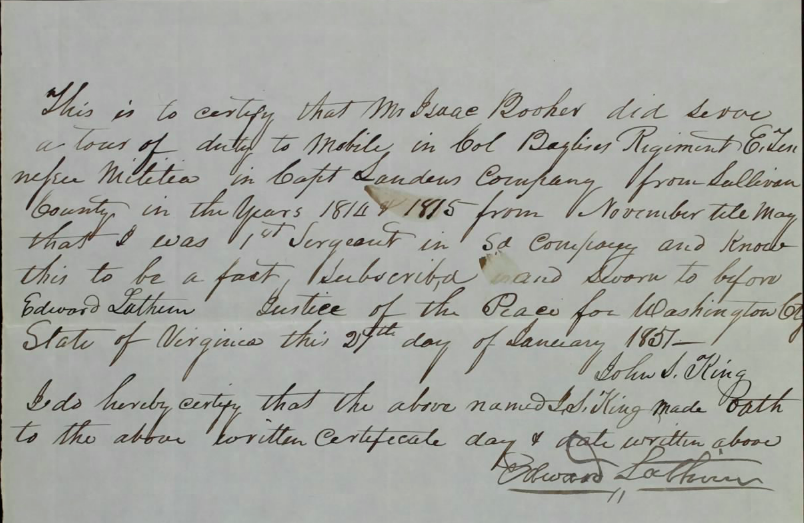 Isaac was born around 1794, so he was approximately 20 years old when he entered Captain Landen's company in 1814. According to the pension file, Isaac's "hair was dark, his eyes were blue, complexion fair and about six feet high."

After the war, Isaac returned to Sullivan County, Tennessee, where he married Catherine Miller on 9 July 1815. The couple lived in Sullivan County for a few years before moving to Washington County, Virginia to take over the lands of Isaac's father, John Booher Sr., and to serve as guardian to Isaac's twin brother Henry Booher.

The next post in this series will look at the widow's pension of Catherine Booher.
Posted by Patrick Jones at 9:42 AM