Will of Samuel Oyler


A copy of the will of my 5th-great-grandfather Samuel Oyler is at the UK National Archives. The will was made on 3 July 1840 in Staplehurst, Kent, England. Samuel appointed his brother George Oyler of Ticehurst, Sussex, his son-in-law William Smith (husband of daughter Betsy Oyler) and daughter Hannah Oyler Chapman (recently widowed), to be the joint executors. He asked to be buried in the churchyard in Hawkhurst. Samuel provided 10 pounds each for the executors and bequeathed his wife Elizabeth (Standen Colville) Oyler possession and use of the household goods and furniture, plates, linen, china, glass and other housekeeping effects during her life and after.

Samuel also asked that she receive quarterly payments of 52 pounds during her life. Next he provided funds for many of his children and grandchildren. Before I cover those named, it might be helpful to recap the known children of Samuel and Elizabeth.

Samuel did not mention his son George in the will. George and family had left for America in 1828, and it is known he returned to England for a visit in 1839. Perhaps he had a falling out with his father. Samuel provided funds for his sons Samuel, David and William, granddaughter Mary Ongley (daughter of Susanna Oyler), step-daughter Mary Colville Chantler, son Thomas Pettit Oyler, two children of deceased son John Oyler, his wife Elizabeth, and granddaughter Betsy Smith (daughter of Betsy Oyler).

The will describes his property at Staplehurst. It had a garden pond and he had access to an alleyway used by the owners of an adjoining cottage, slaugherhouse and garden to the north of his house. Samuel had ownership rights in a barn and 20 acres of land then occupied by Thomas Huggins. Samuel left the rights to his daughter Hannah. Samuel also had contracted to sell land with seven tenements or cottages to the South Eastern Railway Company, which was building a line in Kent to London.

Samuel signed a codicil on 11 November 1840, providing for granddaughters Frances Matlida and Elizabeth (daughters of Thomas Pettit Oyler). Samuel died on 7 December 1840. According to Findagrave he is buried at St. Laurence Church in Hawkhurst, Kent. 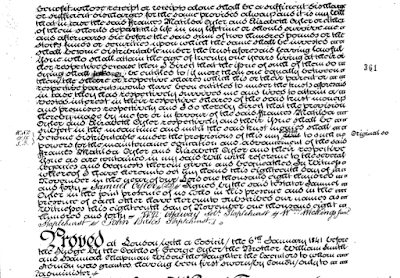 Posted by Patrick Jones at 9:29 AM