In earlier research on my 2nd-great-grandfather Vicente Campuzano, I knew he had been in Tempe, Arizona from 1913-1916 and had a leadership role in Liga Protectora Latina. However, I was not certain when Vicente returned to Mexico. Now based on the recent additions to Ancestry I have a pretty good idea. Vicente and his second wife Beatriz Palacios signed marriage documents in Santa Ana, Magdalena, Sonora on 25 August 1916. They were married on 20 September 1916 in Santa Ana. The records state that Beatriz had been living in Tempe, Arizona, so they likely met while Vicente was living there. 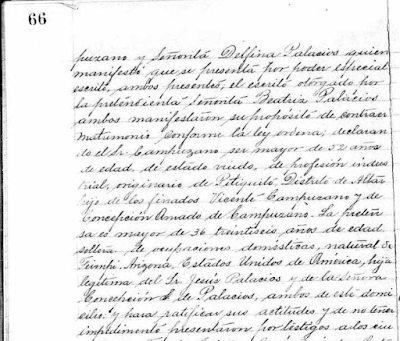 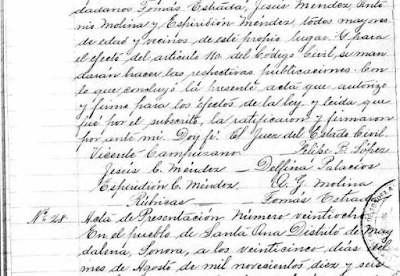 The marriage record entered on 20 September 1916 shows Concepcion Amado as the second wife of the late Vicente Campuzano. Beatriz and Vicente were married at the home of her father, Jesus Palacios, in Santa Ana and Beatriz' younger sister Delfina was a witness to the marriage. 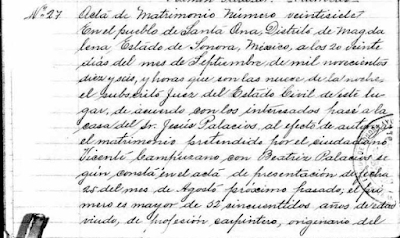 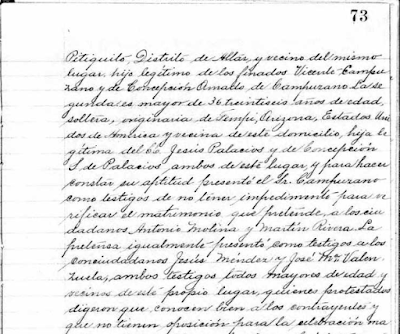 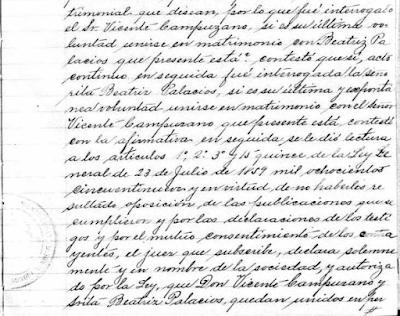 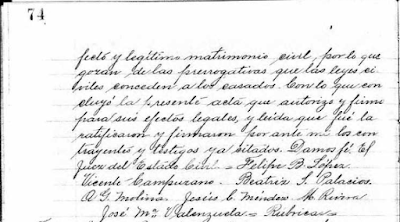 Beatriz and Vicente had a son, Jesus Maria Campuzano, on 21 July 1917 in Pitiquito. Tragically Jesus Maria died on 25 July 1917. This record is available in the collection linked by Ancestry from FamilySearch. Beatriz and Vicente had another son, Manuel Francisco Campuzano, in June 1919. Manuel appears in various border crossing records. One of those records showed that Manuel lived at Obregón 64 in Santa Ana, Sonora. Perhaps the boy in the photo I posted back in August 2015 was Manuel.
Posted by Patrick Jones at 12:14 PM