Back in November 2014, I wrote about the younger sister of my 2nd-great-grandmother Teresa Diaz, and her family with Francisco Mirazo in the border town of Nogales. Maria de Jesus Diaz and Francisco were living with my 3rd-great-grandmother, Dolores Quijada. The addition of new records on Ancestry allowed me to piece together a bit more information on Dolores. She was born in 1844. From 1867 to 1882, the baptism records for Dolores' seven children were in Hermosillo, but by 1883 she and husband Jose de Jesus Diaz were in the Pueblo de Seris, Sonora.
I do not know for certain whether Jose de Jesus or Dolores was of Seri descent, but it seems likely one of them was. This is a huge find. According to our AncestryDNA results, my Mom has 11% Native American ancestry, my Aunt Linda has 13% and Aunt Patty 12%. My sister inherited 5% Native American DNA, and I have 4%. So perhaps the Seri people are the source.

It is not clear where Dolores went immediately after the death of Jose de Jesus in 1884. It looks like she was pregnant with daughter Maria de Jesus Diaz when Jose died. She would have had several young children to care for too. Perhaps she had help from family in Pueblo de Seris. But it looks like she returned to Hermosillo, perhaps living with the family of my 2nd-great-grandmother Teresa Diaz.

After Maria de Jesus married Francisco Mirazo, they settled in Nogales. Dolores joined them and lived for several years there, probably helping with their first three children Francisco (1911), Dolores (1913) and Gustavo (1916). Dolores Quijada died in October 1917. Her death record says she was 72. 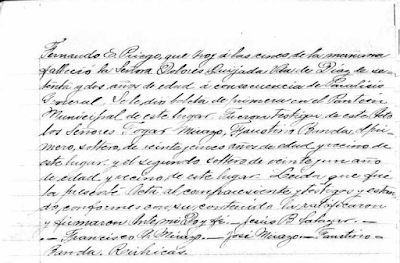 Update - After some further digging, I found Dolores' baptism record. She was baptized on 27 March 1844 in Hermosillo. Her full name was Maria Victoriana de los Dolores Quijada and she was four days old. Her parents were Jose Quijada and Josefa Gradias, and these were my 4th-great-grandparents.

Finding this document opened up another set of entries referencing Dolores' siblings in Hermosillo, and revealed another connection to the Diaz (or Dias) family through Dolores' sister, Luciana Quijada.
Posted by Patrick Jones at 8:48 AM