As we are in the month of March I am looking again at the O'Brien family. Back in January 2012, in my second post on this blog, I wrote about my 3rd-great-grandfather, John O'Brien. The story goes that he left his home in Ireland at a very young age, becoming a sailor in the British Navy.

John appeared in the Decatur Review newspaper on 25 September 1901 (which looks like a clipping from the neighboring Shelbyville Union newspaper). 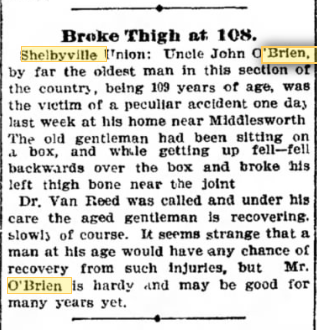 The news that a man of his age was recovering from such an injury made the wire services. An article appeared in the Topeka, Kansas newspaper mentioning him:

Time catches up with everyone, so for John his time arrived a month later at the end of October 1901. The Decatur Review provided a notice of John's funeral on 1 November 1901, writing that he was a "British sailor in the days of the walls of oak" and was "one of the characters of the neighborhood." 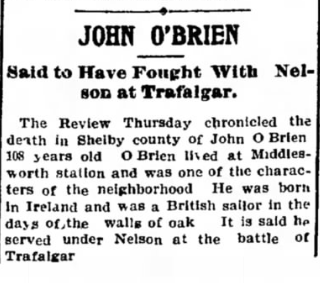 While I have not been able to find a copy of the longer article referenced in the Decatur Review from 31 October 1901 (or any other area newspapers in Macon or Shelby Counties), I have found a few other articles mentioning John. News of his death appeared in the Chicago, Illinois Inter Ocean Newspaper on 2 November 1901. This article says that he served as "Nelson's powder monkey" in the Battle of Trafalgar. Given that he was about 10-11 years old during the battle, this may have been a more apt description of his role on a ship than simple sailor.

This story was picked up by the Associated Press, and appears in a similar form in newspapers across the country, such as the Parsons Daily Sun (Parsons, Kansas), Oshkosh Daily Northwestern (Oshkosh, Wisconsin), Great Bend Weekly Tribune (Kansas), Saint Paul Globe (St Paul, Minnesota), Bismarck, North Dakota, San Francisco, Pittsburgh, Fitchburg, Massachusetts, and New York. It is great to see headlines like "Hero of Trafalgar" and "Served Under Nelson" traveling far and wide.
Posted by Patrick Jones at 8:12 PM