I am now back after over two weeks on the road. This was my first complete transit around the world. Since departing on 15 March, I celebrated a milestone birthday (more than a few times with great friends), and experienced some new places. I have some adjusting to do, easing back into the right time zone.
There is some reflecting to do and I will try to capture some thoughts and observations here.

While I was circling the globe, some new family history information arrived. I am looking forward to reviewing this package and connecting the pieces.
Posted by Patrick Jones at 1:38 AM No comments:


Posted by Patrick Jones at 5:20 AM No comments:

The photo above was taken while wandering around central Moscow earlier in the week. I had to really search to find any kind of significant graffiti near Red Square. This is more like a high quality commissioned piece. The tag in the bottom left corner suggests the artist is "Kobra".

I am now posting this from Seoul, Republic of Korea. Blogger's geolocation may make the posting appear in Korean. I'll have more photos from Moscow later.
Posted by Patrick Jones at 12:04 AM No comments:

I am beginning my trek soon toward Singapore for our next big International meeting. The photos above are a look back to my last visit there in June 2011. On this trip I am looking forward to some of the same places I saw before, great food and to some new sights in the island nation. This will be an around the world trip, taking me first to Russia and Korea before Singapore, and then back with a connection in Japan. It should be a fascinating couple of weeks.
Posted by Patrick Jones at 2:25 PM No comments:

Occasionally my primary field and the topic of family history cross paths (as an example, my post from January 2013 on the UNESCO Vancouver Declaration or October 2012 on Information Standards in the Family History space). Today the World Wide Web turns 25 years old (see The Web at 25 for much more on this).

I agree with the Mozilla Blog ("25 Years of Human Potential") that the World Wide Web is the greatest platform for knowledge sharing and collaboration in the history of the world. I think back to my own early experiences with the World Wide Web, as a student at Wabash College back in 1992. In those days one had to walk to one of the few computer labs on campus and suffer through slow connection speeds, to find limited information and poor graphics. How far we have come since those days.

The World Wide Web has brought a vast collection of the world's knowledge and historical information to our fingertips. In many cases it has helped restore our personal histories, for those who seek them, and is helping to preserve the world's cultural heritage. The Web enables the full range of human potential.


Posted by Patrick Jones at 8:54 AM No comments:

Tennessee is looking for Civil War Heritage for 150th Anniversary

This post was prompted by the Tennessee State Library and Archives, which is currently seeking stories, photos and memorabilia from the Civil War. "Digital copies of these items, representing the rich Civil War heritage of Tennessee families, will become part of a virtual exhibit commemorating the 150th anniversary of the war in Tennessee."
The image above is from the selection of material from Hamblen County, Tennessee, showing part of a $500 bond from the East Tennessee and Virginia Railroad Company. My 3rd-great-grandfather Joseph Thomas Jones worked for the railroad after the Civil War.

I have a personal hope that this effort will result in the scanning of documents related to my Tennessee ancestors. If you have Civil War items related to Tennessee, please contact the TSLA about digitizing this heritage.
Posted by Patrick Jones at 3:47 PM No comments:

I have previously covered my 5th-great-grandfather Henry Davis in several posts, including recently his service in the War of 1812 and the arrival of the family in Vermilion County, Illinois in 1835 and 1836. For the Davises to buy up so much land in Illinois they had to sell off their property in Ohio. Yesterday I received a copy of several land transfers in Guernsey County, Ohio from 1836, showing that Henry did sell off his property before moving to Illinois.

Sales to Alexander Mackey and Vincent Corkins
On 28 March 1836, Henry and Rachel Davis sold off the land of his original land patent in the southwest corner of township 9 in Guernsey County to Alexander Mackey for $1200. Henry and Rachel made a second sale on the same day to Vincent Corkins of Guernsey County for $3303 for the west half of section 6, township 9 in Guernsey County, containing 275 acres. The sale to Corkins was also witnessed by the 4th-great-grandmother Jane Conner Davis. 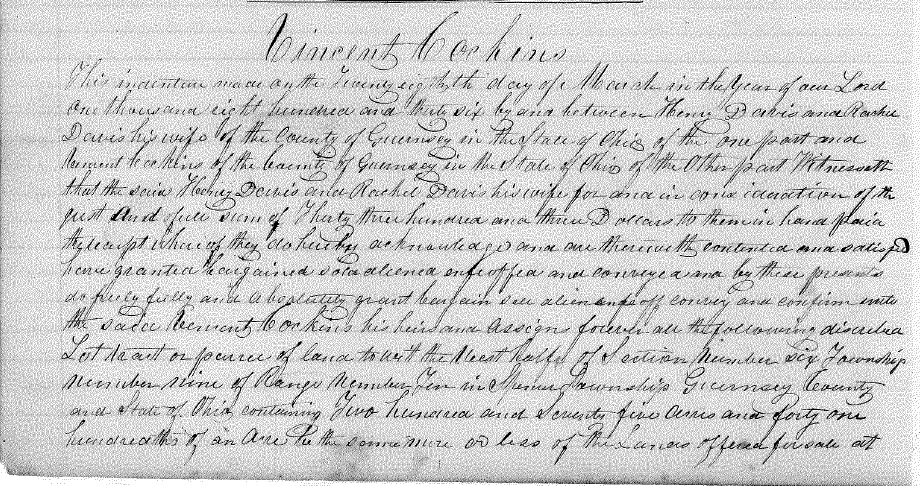 In one day the Davis family transferred their Guernsey County lands in exchange for $4503, a huge sum in 1836. This certainly helped support the family's move to Illinois.

I owe thanks to the Guernsey County Recorder's Office, who responded to my request in one day and sent a copy of the land transfer by email.
Posted by Patrick Jones at 6:58 AM No comments:

Wordless Wednesday - Pyramid and the Sphinx

In 2014, I've been exploring the line of my 2nd-great-grandmother, Matilda Jane Lambert O'Brien. This includes her father's side, Henry Donham Lee Lambert, and mother's side, Sarah Brown. I will be returning to the Lambert and Lee sides of the tree. On the Brown side of this tree, I've made quite a lot of progress uncovering the lines of Sarah's parents, Christian Brown and Eva Welsh. Today's update focuses on Sarah's grandfather, my 5th-great-grandfather, Michael Braun/Brown. Michael was a veteran of the 6th Pennsylvania regiment. 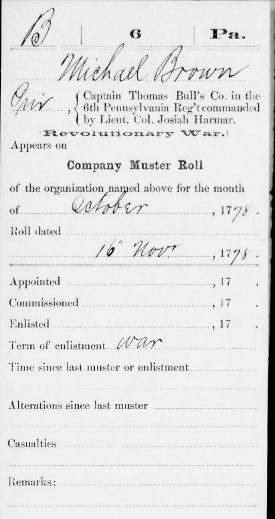 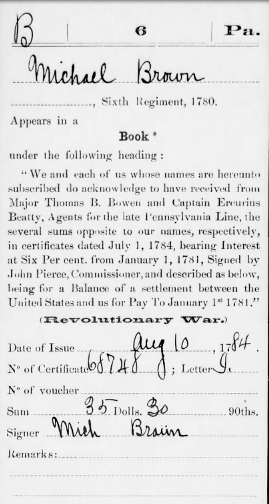 It appears the 6th Pennsylvania was at Valley Forge. Michael Brown appears on the muster roll in Captain Thomas Bull's company on the Valley Forge Legacy website:
It is unclear if Michael Brown was part of the regiment that spent the famous winter of 1777-1778. According to the book Valley Forge: A Chronicle of American Heroism, the 6th regiment was encamped at Valley Forge on 31 December 1777.

Either way, it is very cool to see an ancestor had a role in the Revolutionary War and served for a period of time in the famous camp at Valley Forge. This will be a great piece of history to share with the kids.
Posted by Patrick Jones at 9:17 AM No comments:

Repaying a Loan to Henry German

This a companion post to the earlier one today on Christian and Eva Brown. On 3 April 1816, Christian Brown (spelled Braun in this document) received a loan of two hundred dollars from George German, payable one year later on 2 April 1817. The document states that Christian was living in Heidelberg Township, Lebanon County, Pennsylvania at the time. George German died sometime after providing Christian with the loan.

The document shows that Christian paid off the loan to Henry German, executor of the estate of George German, on 3 January 1818. 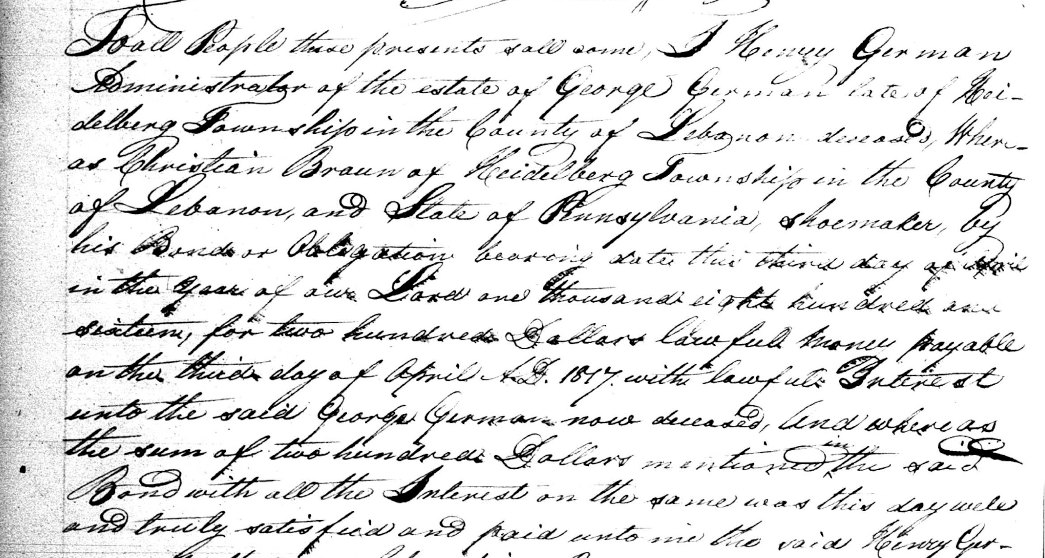 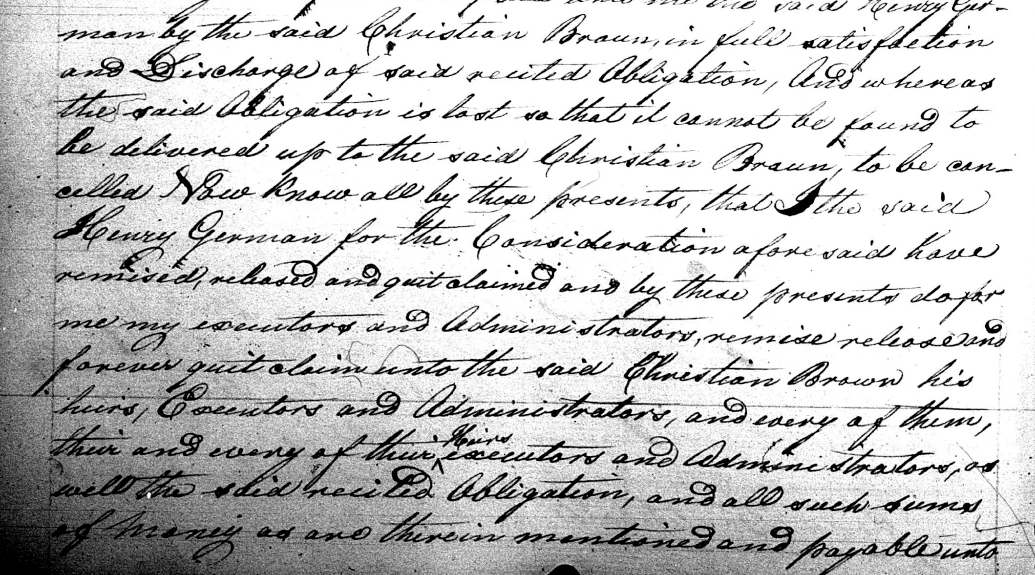 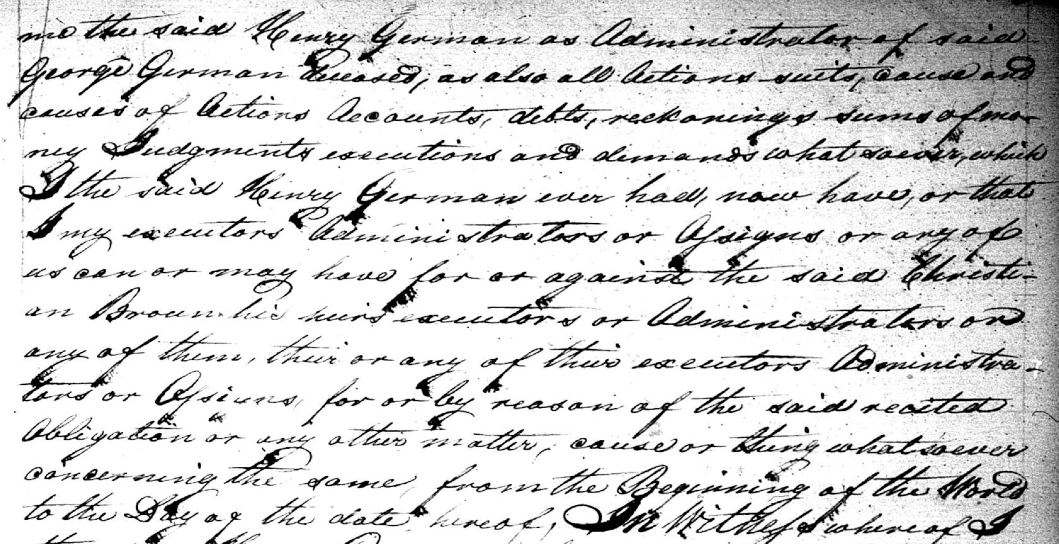 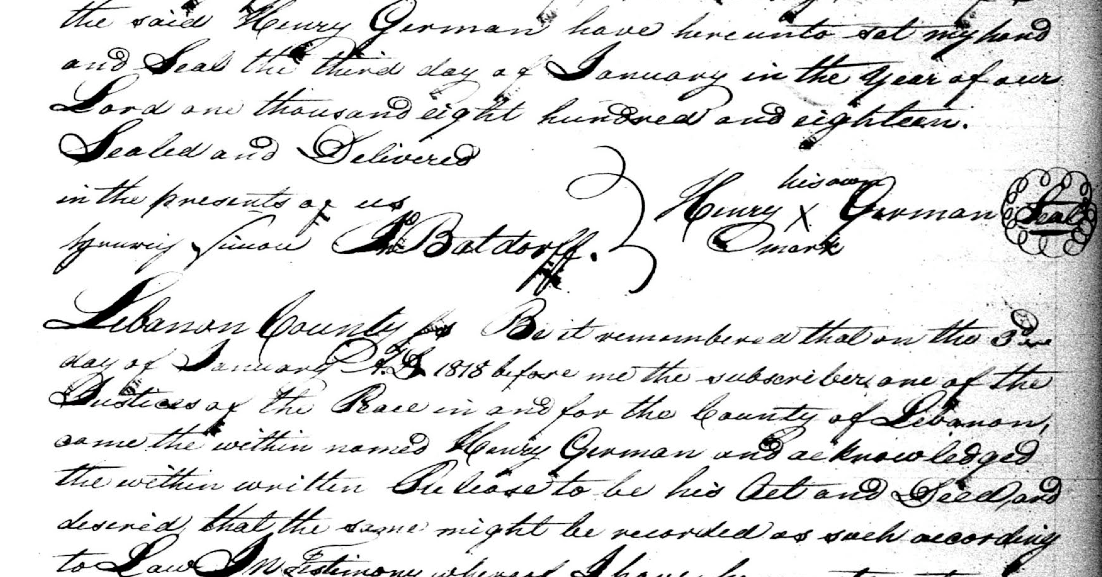 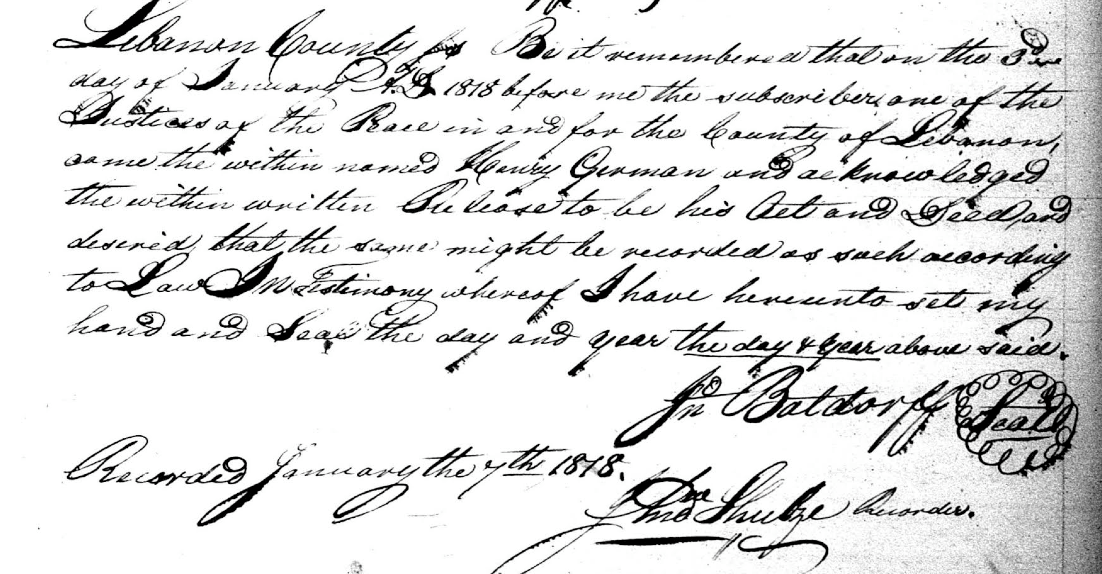 Posted by Patrick Jones at 4:07 PM No comments:

More on Christian and Eva Brown

Once again I owe big thanks to the Lebanon County Historical Society. Yesterday I received a copy of two entries from Deed Book A in Lebanon County and several pages of additional marriage records from the Salem Evangelical Lutheran Church transcriptions. The marriage record shows a marriage on 5 March 1805, between Christopher Losser (widower) and Eve Welsh (widow). The witnesses were Susanna Lochman and Elisabeth Nagle. The first deed book entry provides clarification on the relationship of this Eve Welsh to my 4th-great-grandmother Eva Welsh Brown.

Last week's post on the Brown Family in Pennsylvania noted the marriage of Christian Brown and Eva Welsh in March 1813 was witnessed by Christopher Loser. From seeing other documents, I think the correct spelling is Losser, with the double "s" being a German-style eszett. 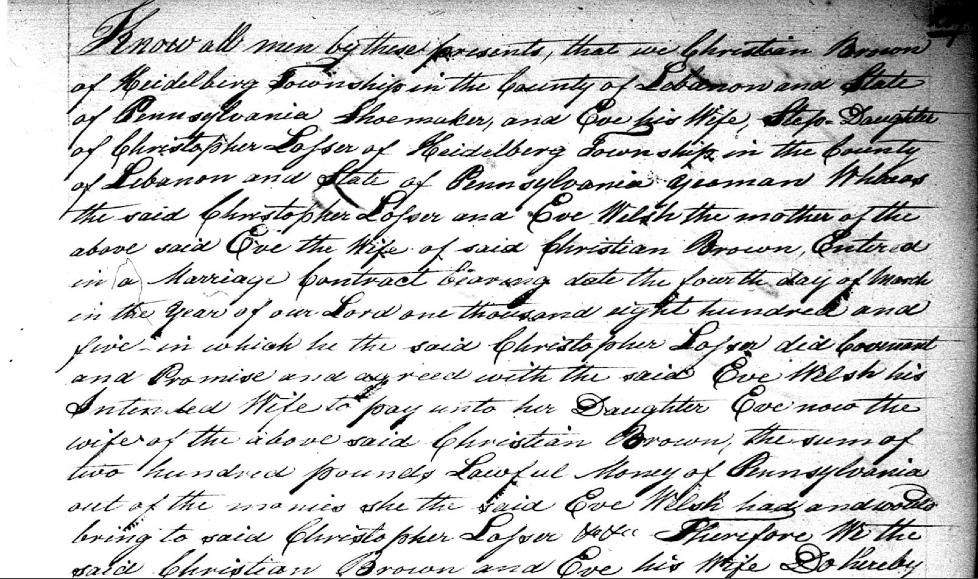 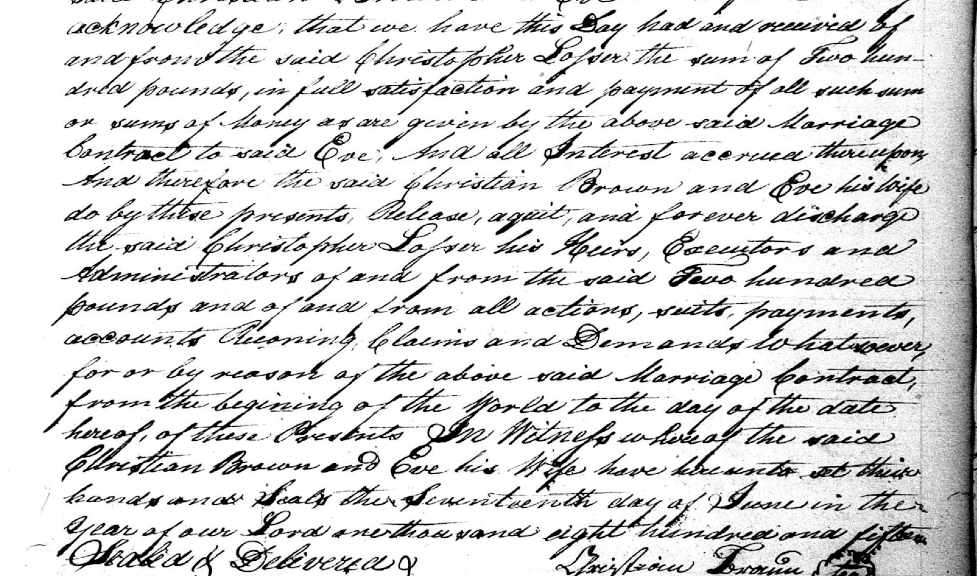 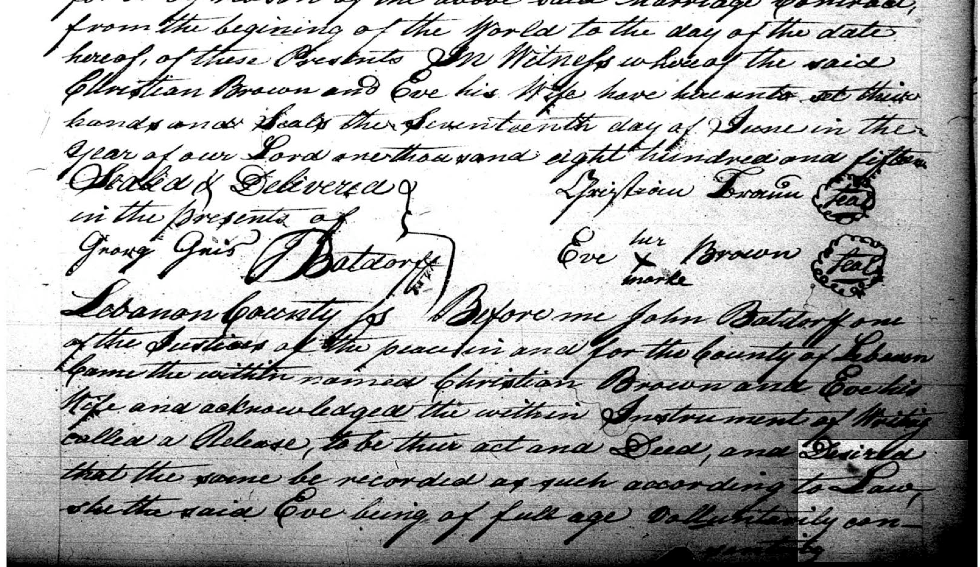 From looking at this document, Christopher Losser was Eva Welsh's (written here as Eve) step-father. When he married Eva's mother, also named Eve Welsh, he agreed to pay two hundred pounds of Pennsylvania money out of the money that Eve had brought to the marriage with Christopher to Eva. This also shows that Christian was a shoemaker, and he could sign his own name. Christian and Eva were living in Heidelberg Township, Lebanon County, Pennsylvania.

This gives some new research direction. Last week I thought I had Eva's father as Michael Welch, but now it looks like Eva's father died before 1805. There's more work to on Christopher Losser, and to see if I can find a will for him or Eve Welsh Losser. I will have a subsequent post on a loan paid back by Christian Brown to Henry German.

At least with the entry above, I know now the name of my 5th-great-grandmother on this line. Welcome to the family, Eve Welsh.
Posted by Patrick Jones at 9:22 AM No comments: