My 5th-great-grandfather Henry Davis was born in Greene County, Pennsylvania on 20 September 1781. He married Rachel Pollock in Ohio (most likely Guernsey County) on 12 March 1807.

According to the account of son James Davis in the Past and Present of Vermilion County, Illinois, Henry Davis served in the War of 1812. I don't yet have a service record for Henry, but he did acquire a land patent in Guernsey County in 1812. At the age of 31, on 19 November 1812, Henry Davis obtained a land patent for the southwest corner of section 6, of township 9, in range 10 in Guernsey County, Ohio. The land patent shows that Henry was living in Muskingum County, Ohio at the time. 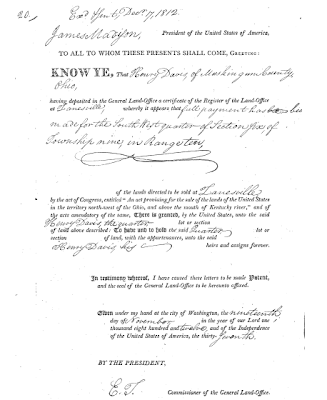