I have previously posted about Matilda Jane Lambert, my 2nd great-grandmother and wife of John J. O'Brien. Her father was Henry Donham Lee Lambert. He was born in Waterloo, Fayette County, Indiana on 7 February 1833. He died on 20 March 1909, and he was one of the first settlers in Luther, Oklahoma County, Oklahoma. Henry was the son of Clayton Lambert and Rhoda Lee.

In the 1850 US Census, Henry is in the household of his parents in Waterloo, Indiana. 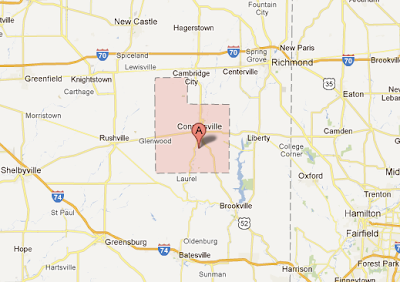 By 1860, Henry had moved the family to Parke County, Indiana, on the opposite side of the state, not far from the Illinois border.

In the 1870 US Census, the family was in Rose Township, Shelby County, Illinois.

Sarah Brown Lambert died sometime before 1875. Henry remarried in 1875, when he and Cordelia (Herman) Hensley were married. It is interesting to see Cordelia and her children living three houses down from the Lamberts in the 1870 Census.

Cordelia was born in Germany on 22 February 1838. She died in Luther, Oklahoma on 28 November 1918. Henry and Cordelia had four children, although at this time, I only have the names for:
1. Elmer Lambert
2. Olive V. Lambert

Cordelia had previously been married on Samuel Hensley. She received a widow's pension for Samuel, who fought for Illinois in the Civil War. Cordelia and Samuel had at least three children: Caroline Hensley, Mary E. Hensley and Priscilla Hensley.

By the 1880 US Census, Henry, Cordelia and family appear in Elk Falls Township, Elk County, Kansas.

Here is a map of their likely migration route from Rose Township, Shelby County, Illinois, to Elk County, Kansas (via Google Maps): 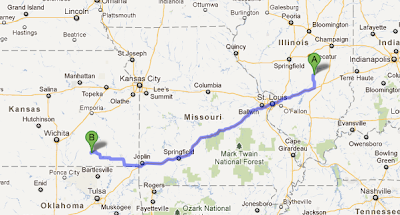 A map showing the migration route for Henry, from his birth in Fayette County, to Oklahoma County, Oklahoma, is below. 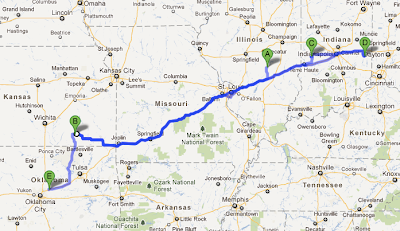 Posted by Patrick Jones at 5:15 PM