Fold3.com has a great collection of Civil War material, one part of that collection is titled Letters Received by the Office of the Adjutant General, Main Series 1861-1870. I have been trying to learn more about the killing of Captain John Thornhill, nephew of Elizabeth Thornhill Jones and cousin of my 3rd-great-grandfather Joseph Thomas Jones. The fallout from Thornhill's case rose to the attention of President Andrew Johnson in January 1866. 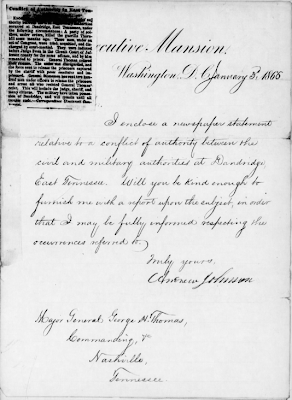 Johnson enclosed a news clipping from the Cincinnati Commercial titled "Conflict of Authority in East Tennessee" and asked for a report on the situation. I've made a larger copy of the news clipping below. It is interesting to see Thornhill characterized as a "guerilla" since he previously had commanded Company B in the US 9th Cavalry. 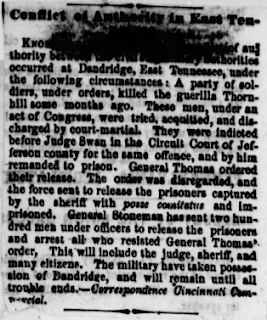 As noted previously, this case eventually went to the US Supreme Court, but was sent back down to the courts in Tennessee. I don't have the history on the case after it was sent back in 1870. Next step for this is to write to the Tennessee State Archives to see what they have.
Posted by Patrick Jones at 5:52 AM