I have written previously about Elizabeth Thornhill Jones and her struggle for a widow's pension following the death of her husband, Robert Thomas Jones Sr., during his return from service in the Tennessee 5th Infantry during the Mexican War (see Part 1, Part 2). Elizabeth also lost her son, Robert Thomas Jones Jr., as his Company G was making their way down the Tennessee River in December 1847. Elizabeth filed a Mother's Pension application for Thomas Jr on 23 March 1869. Sadly for her, this application, like the one submitted for her husband, was denied without explanation on 19 April 1869. 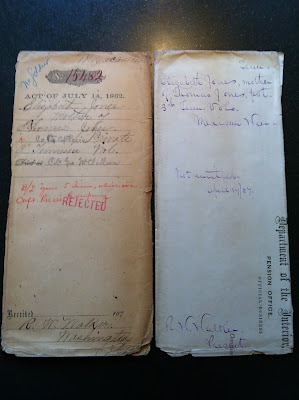 The application correctly notes that Thomas Jr died at Muscle Shoals, Alabama from the flat boat the Company was on striking a tree that was projecting into the river. This matches the personal account written by Richard Mitchell Edwards. The pension application has the dates for the accident wrong, listing 15 October 1847 as the date for the accident instead of 15 December 1847.

The application includes an affidavit signed by John W. Bettis and Josiah E. Rankin, both of Jefferson County, Tennessee. They attest that they employed Thomas Jr. and paid his wages from January 1844 until he joined the army in 1847. According to their affidavit, "he contributed to her support by working on a farm and letting her have his wages which amounted some 10 or fifteen dollars per month, we know this fact from our having hired said Thomas Jones, and paid his monthly earning to his mother in corn, bacon, flour meal, clothing, house visits doctor bills and money. We know the above facts from our own knowledge having furnished said articles ourselves."

The doctor bills could have been associated with pregnancy. She had two children, Francis Marion Jones and Sarah Melissa Jones, between 1844 and 1846.

Other interesting aspects show that she was living in Panther Springs, Jefferson County, when the application was submitted in 1869. She also states that she was living on a one fourth acre lot owned by Samuel Hain, and the value of the property is "fifty dollars." She attests that "she neither owns nor has in use any other property, real, personal or mixed, from which a revenue can be derived. That she is poor, and has no source of income, save and except what little money she may be enabled to earn by her own exertions. That she is incapable of earning her own subsistence, by reason of her age and physical infirmity."

It is not clear from the file at the National Archives what reason was given for rejecting her mother's pension application. The application was filed her attorney, R.W. Walker of Washington City, Tennessee. 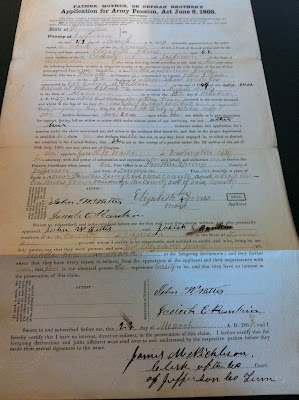 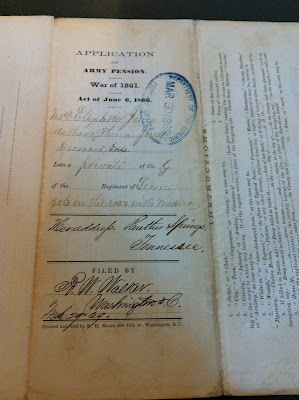 When this application was filed, Elizabeth was 62 years old. By the 1870 Census, she was living in the household of her daughter, Sarah Melissa Jones Daniel, and her husband William G. Daniel.

Seeing this makes me want to write for some posthumous acknowledgement that she should have received a mother's pension and widow's pension from the deaths of her husband and son from service in the Mexican War. At this point I am planning to contact the Descendants of Mexican War Veterans and at least make them aware of what I have found on Robert Thomas Jones Sr and Jr.

Another note, during the trip to the National Archives, I had a chance to look at the widow's pension application submitted by Caroline Jones for Thomas Jones (age 29). He was from Jackson County, Tennessee, and was not connected to our Jones family. He survived the flat boat accident at Muscle Shoals, Alabama and died in Mexico, leaving behind a child, Mary Emeline Jones, who was about 15 months old when Thomas Jones enlisted in the Army. I did not take copies of this file.

Posted by Patrick Jones at 8:47 AM