Before I describe the pension application of Elizabeth Jones, I wanted to pass along some thanks to two sisters, Lynne and Pat, who have been an enormous source of ideas over the past two years. In late February 2010, I received an inquiry through Ancestry from Lynne about Sarah Melissa Jones (10th child of Robert and Elizabeth), and since then we've exchanged quite a bit of email and ideas. Their suggestions (and a key document passed down to them listing the children of Robert and Elizabeth Jones) have helped break a number of brick walls. I truly owe them a lot, and this find is as much, if not more, to bring some closure on a mystery for them as it has been for me.

While I have been collecting family history information for over 20-some years, I really have not done a good job of researching on my lines since about 2005. Even then, for the first few years, I was dealing with a cross-country move, a first child, a career. I'd say in the last few years, this research has evolved. Perhaps I have gotten better at multitasking and utilizing as many hours as possible in a 24 hour day. I have put more emphasis on doing this right, documenting sources and information. This research has been an outlet and opened up a world of new information. It's taught me that we never stop learning, and the lessons from the past can be just as useful and important today.

In reading this file I have mixed emotions. I am glad this has been found. As a document, this validates much of the information that Lynne, Pat and I have for the family of Robert Jones. On a more personal level, I feel bad for Elizabeth and what she went through. She lost her oldest son a month after he entered service, her husband she never saw again, and she was left to raise eight children (7 were under the age of 16 when Robert died). It is frustrating to see she did not get the widow's pension, as it seems that Robert contracted yellow fever while in service in Mexico. She should have been awarded the pension. 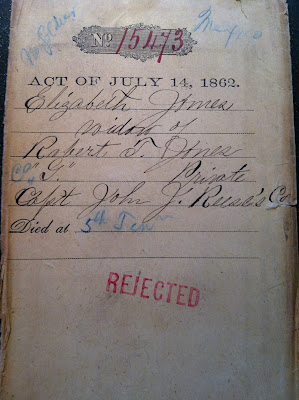 The file contains the following original documents:
- Letter from the Pension Office dated 11 January 1863
- Letter from the Pension Office dated 27 March 1861
- Affidavit of Walker McCrary (a member of Co. D, 5th Infantry)
- Signature page of E.K. Bachman, Justice of the Peace of Sullivan County, Tennessee (witness on McCrary's affidavit)
- Letter of Justice A.G. Graham of Jonesboro, Tennessee dated 21 March 1861
- Claim letter signed by Elizabeth Jones, 15 December 1852 (witnessed by Russell Birdwell, Justice of the Peace of Jefferson County, Tennessee)
- Affidavit of Miles Jones (member of Co. G, 5th Infantry)
- Certification by James M. Nicholson dated 24 December 1852 of the accuracy of the documents and confirming that Robert & Elizabeth Jones were married and had a license issued in Jefferson County on 20 October 1824.

The Claim, 15 Dec 1852
(The following is my best transcription of the document, written in ink by Russell Birdwell. I have inserted breaks for ease of reading)

State of Tennessee, Jefferson County} On this 15'' of December in the year 1852, personally appeared before the undersigned an acting Justice of the Peace in for said County, Elizabeth Jones, aged about 44 years, a resident of said County, and who being first sworn according to law, doth, in her oath, make the following declaration in order to obtain the benefit of the pensions of an Act of Congress passed 21 July 1848 and subsequent amendments thereto, granting widows 5 years half-pay pensions:

- That she is the widow of Robert (T.) Jones, who was a private in Capt. Reese's Company "G" 5 Tenn. Vols. engaged in the late war with Mexico, that she was married to the said Robert T. Jones in said County on the 20th of October 1824 by one Rev. D. Kimbrough, that her said husband died, or was drowned on or about, the 22 day of July 1848, as she was informed in consequence of the operations of disease upon his body & mind, causing him to be partially deranged. He contracted said diseases in service, as she is informed as he [unreadable] that is to say, he contracted the Diarrhea, in April 1848, at the National Bridge, Mexico, which contrived upon him until he was discharged when he was in a low state of health. And at Memphis, where he was discharged, he got on a boat to come home on the [unreadable] around Nashville.

The disease and the medicine he had taken to cure himself, had so operated on his health, that he became partially deranged so that, a day or two after starting from Memphis, he walked off the boat, and was drowned in the Mississippi. This she is informed was in the night time, as he was on his way to his usual place of residence in Jefferson County.

As will more fully appear by reference to the proof hereto annexed, states that she made efforts to apply for a pension some time since, but the Clerk could not find the original marriage license and was thus delayed until he could make a new said [unreadable], which has proved in law. She has no private record of her said marriage and the public one is thus mislaid.

Sworn to and subscribed before me as on the day and year above written -- Russell Birdwell, Justice of the Peace}  Elizabeth Jones her [x] mark 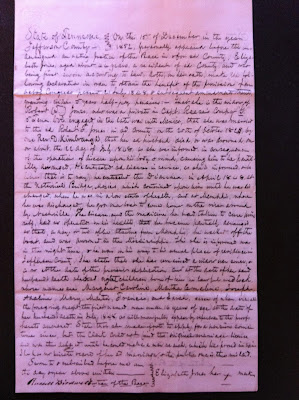 State of Tennessee, Jefferson County} On this 15'' of Dec 1852, before me, an acting Justice of the Peace in and for said County, personally appeared Miles Jones, a citizen of said County, of good character and entitled to credit for veracity as a witness, and who being duly sworn according to law, doth state, that he was a private in Capt. Reese's Co. "G" 5 Tenn. Vols. engaged in the law war in Mexico, and well knew the within named Robert T. Jones, who was also a private in said Company, and who was mustered into service at Knoxville, Tenn to serve during said war in Nov. 1847, and having completed the full term of his enrollment, he was honorably discharged at Memphis Tenn about 20 July 1848.

He states further that said Robert T. Jones was transported to Mexico and stationed at the National Bridge and whilst there in perhaps April 1848, engaged in actual service and in the line of his duty as a soldier he was attacked with the diarrhea, which entwined to operate on him until he was discharged. He was then a perfect weak of [unsure of word], and could scarcely get about, and was wandering occasionally in his mind. The disease, and the remedies prescribed having such an effect upon his intellect at Memphis as he got aboard a boat to go home by way of Nashville, but on the first or second day he was out, as near as Deponent can recollect it was the 22d day of July 1848, on his way home, he became more debilitated and deranged than usual, and walked overboard, in this helpless state, and was drowned in the Mississippi.

He states further that he is well acquainted with the foregoing Elizabeth Jones, the widow of Robert T. that prior to entering service , they lived together as lawful husband and wife in said County for upwards of 20 years, and were rec[unsure of word] with society as such, and lawfulness of the marriage relation existing between them. He never heard questioned and they had a numerous family of children, 8 of whom now living are as follows, Martha E., Margaret C., Joseph, Adaline, Mary E., Martin, Francis, and Sarah, all of whom were under 16 years of age in July 1848, except Margaret C., and that said Elizabeth Jones has remained a widow to the present time. He states further that he is a disinterested witness and states the truth as he knows it.

Sworn to and subscribed before me on the day and year above written - Russell Birdwell, Justice of the Peace} Miles Jones, his [X] mark

State of Tennessee, Jefferson County} I do hereby certify that Russell Birdwell Esq. whose genuine signatures appear to the foregoing declaration and affidavit was at the dates thereof an acting Justice of the Peace in and for said county, duly elected and qualified.

I further certify that it appears from the records in my office that Robert Jones and Betsy Thornhill were lawfully married in said county by the Rev. Duke Kimbrough, minister of the Gospel (no date given) but marriage license issued Oct 20th 1824. Said license after long search being found on the files after the date of the foregoing declaration of Mrs. Jones.

I also certify that Miles Jones is a citizen of said county and a credible witness.

Given under my hand and official seal at office in Dandridge on this 24th day of December 1852.
James M. Nicholson Clerk of the County Court of Said County
--
Part 2 of this post will cover the documents from 1861-1863. Quite a bit interesting with these three documents. Son Robert Thomas Jones Jr. is not mentioned, neither is oldest daughter Catherine Jones. She married Stephen Murry on 5 June 1845, and was living in Jefferson County, Tennessee as late as the 1880 US Census. Perhaps they were not mentioned because they were no longer in the household in 1848 and Elizabeth was not responsible for caring for them by 1852.

During the Mexican War, illness and disease appears to have killed more soldiers than wounds sustained in battle. A paper from David W. Tschanz published at the University of Montana states that soldiers who were in Veracruz may have contracted yellow fever (see his 1999 paper, Yellow Fever and the Strategy of the Mexican American War). The illness described in the affidavit of Miles Jones and claim filed by Elizabeth Jones sounds like yellow fever.